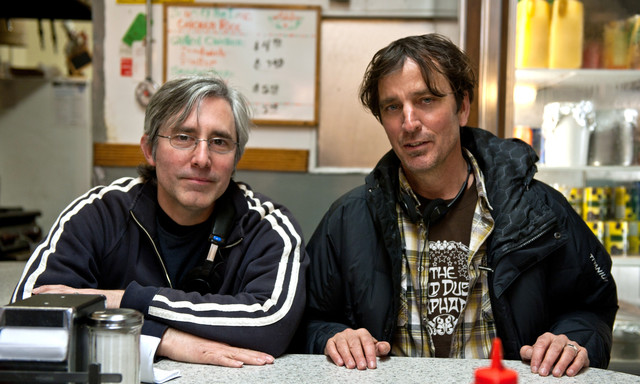 Nick Flynn grew up on Boston’s South Shore and spent six years working at the Pine Street Inn, Boston’s largest homeless shelter. Raised by his mother, Jody, who committed suicide when he was 22, Flynn hadn’t seen or spoken to his father in 18 years, until Jonathan Flynn called Nick out of the blue and turned up at the shelter, homeless and looking for a bed.

Flynn’s stunning memoir about his subsequently renewed relationship with his alcoholic and bombastic father, “Another Bullshit Night in Suck City” (named after one of his father’s acerbic sayings), is the basis for a new movie, “Being Flynn,” starring Robert De Niro, Paul Dano, and Julianne Moore. Nick Flynn now lives in Brooklyn and teaches writing each spring at the University of Houston. Following is a transcript of his conversation with Spare Change News.

Spare Change News: What initially brought you to the Pine Street Inn? Why did you want to work there?

Nick Flynn: I was in my early 20s, I was in Boston, I was a carpenter doing construction. It was right around the time we were transforming a lot of buildings in our cities into condominiums. A lot of them had been single-room, SRO buildings for many years, and then they were being privatized and I didn’t feel good about the work. I didn’t like going into these buildings and cutting them into these exclusive things. The exact opposite thing I could do would be to go work with the homeless. I took a trip and went to Nicaragua for a few months and saw the Contra war down there. It was just a very political time for me. I came back and wanted to do something political where I lived. Working with the homeless seemed like a political act.

SCN: What did you learn about homelessness?

NF: Over those years, you get to know individuals pretty well. Everyone had a story, how they ended up there. People from different backgrounds, they came from money, they had nothing. People who had been institutionalized, had been in prison, people with medical issues, people struggling with substance abuse. Veterans. People with financial issues. There’s a whole mix of people at the shelters, thrown into one huge pot.

SCN: What do you see as some of the answers to homelessness?

NF: There are all sorts of programs. Most of these Housing First empowerment organizations are really trying to get people into housing, skip the whole lingering in shelters for a while and as soon as they become homeless get them back into housing, some sort of supportive housing. Those programs seem to be working very well. The solutions seem quite clear, a lot of people have done a lot of work finding out, studying and putting into practice what the solutions are. It’s a matter of public will to get behind it.

SCN: What did you think about the using homeless as “homeless hotspots” at the SXSW music and technology conference in Austin?

NF: I heard the guy who put it together try to compare it to street newspapers, that’s just (crazy). There are waves of people, I wouldn’t call them well-meaning, it just seems very gratuitous and sensational, it feels like an attention grab.

NF: Yes, yes. SCN: How do you react when you see homeless people today? Do you give them money? Stop and talk?

NF: It completely depends. I have no formula. Sometimes I do, sometimes I don’t. My thinking about it is we’re sort of thrust as a society into these impossible situations. It really is unclear what the right thing to do is. The solution is to work on not having so many homeless people. In the meantime, we have to sort of muddle through our own moral landscape on a daily basis.

SCN: Where is your father now?

NF: He’s in a long-term care facility in Boston. I had to transition him out of his apartment. The Elders Living at Home Program in Boston got him out of shelters and off the streets, a little after he turned 60. That program was started by someone I worked with, Eileen O’Brien. She saw this need and opportunity to connect people with services, and she did that, and this program has been going for 25 years, and that’s what got him off the street. He was in an apartment for 17 years, and then he needed more help.

NF: I try to get there every three months or so. It gets hard in the spring because I teach down in Texas, but when I get back I have a trip planned to Boston to go see him.

SCN: In the movie, your father declares, “America has produced three classic writers: Mark Twain, J. D. Salinger, and me.” While he didn’t publish the book he was always talking about, he did have a real facility with language.

NF: He was engaged with language, and he did have good taste in literature, he was writing a lot, and he could have been a published writer. I think, really, alcohol was his downfall. It’s hard to say what his life would have been like if he hadn’t drank.

SCN: But in some respects you fulfilled his dream.

NF: But I think I was on the same path as him. When I was drinking, I was doing a lot of talking about writing, and not actually doing a whole lot of actual writing. I had to quit drinking and doing drugs in order to write.

SCN: When did that happen?

NF: A couple years after he showed up at the shelter. When he showed up at the shelter I was probably 27 or so. I went on a bit of a tear for a couple of years, and then I sobered up. It sort of became clear that he wasn’t going anywhere, he wasn’t getting off the streets, and I could either go down with him or go in the other direction. I thought it was worth a shot seeing what the other direction looked like, and I was sort of lucky I did.

SCN: Are you pleased with the movie?

NF: Yes, I am. I worked with the director, Paul Weitz, on the script for seven years. It captures the variety of people who get caught in homelessness, and what life in a shelter is like. I think it captures things well. But it’s definitely through one person’s lens, (my father) is not supposed to represent all homeless people, there’s not one representative of all homeless people. He represents one type of homeless person.

SCN: How did your father feel about being portrayed in the movie?

NF: Alcoholism manifests itself in many different ways, and one of the manifestations with him is a very sort of solid narcissism. He’s actually not surprised in the least that a movie has been made about his life, and even that Robert De Niro, one of our great actors, should be playing him. It doesn’t surprise him, he completely expected it his whole life. He did want Dustin Hoffman. He was a little disappointed, but, you know.

SCN: A lot of people, given the long estrangement between you and your father, wouldn’t have let him back into your life.

NF: I don’t claim to be able to say what anyone should do. This is what I did, I did it because I sort of had to. My brother has had no contact with our father. He lives in upstate New York, I see my brother all the time, so there’s two of us in the same family who have taken very different approaches to this. I don’t think my way is any better than his way. People have to find their own way.

SCN: You gave up alcohol and drugs – did you replace them with anything?

NF: I did some meditation, therapy, whatever I can do that’s not alcohol and drugs. Buddhism has been very helpful, meditation, and other stuff like that.

SCN: One of your father’s famous lines in the book and movie, “We are put on this earth to help other people.” Do you believe that?

NF: It’s used in the movie quite a bit. It is sort of one of his iconic lines. But it’s also a bit ironic because it does seem like he’s mostly talking about himself, that one should help him, one should help him. But if you take it out of that context, it’s a profound insight.

SCN: You followed “Another Bullshit Night in Suck City” with “The Ticking is the Bomb,” in which your father reappears, and now you’re working on a book about your story being told on the big screen.

NF: “The Reenactments,” it’s called. Getting to see your family reanimated by these great actors.

SCN: What advice do you have for homeless writers?

NF: From the Buddhist perspective, you need to have three legs to the pyramid or the tripod. One of the legs is the sangha, which is the group, so one should have a community of writers, meet with a group of other writers. One is the dharma, the books, the texts you read. So you should read other writers to see what inspires and influences you. The other one is the daily practice, the meditation, you just have to write every day. That’s sort of the Buddhist way, but it seems to make sense for writing as well.

(For more about Nick Flynn, go to http://www.nickflynn.org/ Nick Flynn will give a public reading at 6 p.m. on April 4 at Emerson College in the Beard Room. For details contact Ladette_Randolph@emerson.edu).

TOM BENNER is editor of Spare Change News. Email him at editor@sparechangenews.net