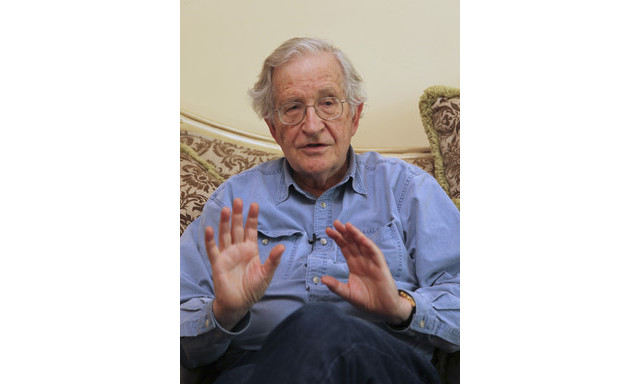 Noam Chomsky’s new book, “Occupy,” is printed as part of the Occupied Media Pamphlet Series and lays out many arguments first articulated at student meetings and in front of gatherings of Occupy Wall Street (OWS) activists.

Professor Chomsky’s interest in Occupy is consistent with his support of previous grassroots movements for change and can be seen as stemming from certain of his more well-known views on American culture and politics.

Elsewhere, Professor Chomsky has said that “it’s only when people get together that they become dangerous” because then “they begin to enter that arena where they don’t belong, namely influencing public affairs.” Hence the usefulness of what is known as “the entertainment industry” for those who don’t wish to relinquish their hold on the levers of power in society. Television (“You are alone watching the tube. That is very advantageous for the control of people”) and sports (“a way of building up irrational attitudes of submission to authority”) are both useful insofar as they succeed in keeping people isolated and outside of the political arena. It is because they overcome these strategies of alienation and estrangement that movements like Occupy Wall Street will always be opposed by police wielding pepper spray and teargas.

Together with his friend, the late Howard Zinn, Professor Chomsky was one of the first major supporters of Spare Change News. Despite a hectic schedule and pressing demands on his time, he kindly agreed to an interview with Spare Change News in order to discuss — among other things — Occupy Wall Street, the role of elite universities, and his reputation as the “most-cited living author in the world.”

Spare Change News: In reading the biographical blurb to one of your more recent articles — TruthOut’s adaptation of your Occupy Boston talk — I was surprised to learn that you’re listed as a New York Times syndicated columnist. Ironic, considering your history of leveling criticism at the Times … How long have you held this distinction?

Noah Chomsky: I was invited by the editor, who seems to operate more or less independently of the journal. I don’t know the details. The op-eds distributed by the syndicate, though distributed here, don’t appear in the New York Time, or in the US press generally (except for In These Times, occasionally some other small newspaper, or websites). The book “Interventions” is a collection of them (updated), and another collection is appearing.

SCN: We’ve all seen the video of police pepper-spraying protesters, but few know that City of London police recently listed the OWS activists among “terrorist groups” like al-Qaida of Pakistan in an advisory notice. According to the New York Times, the police operation to clear Zuccotti Park was preceded by weeks of counterterrorism training. And Michael Greenberg writes in the New York Review of Books about how a police satellite truck was for weeks parked in front of the apartment building where one of the “core organizers” for OWS lived; the police were “apparently monitoring people who came in to see her.”

NC: It was never in doubt that the authorities would act to terminate the occupations. The only question was when and how. It appeared to be a nationally coordinated effort, implemented in different ways throughout the country. As for the effect, it depends how the OWS movements and their supporters respond. Of course, the repression, however predictable, should be protested, and the victims defended. But we should all realize that the best defense against repression is to carry the struggle forward. That’s the task in hand.

SCN: But what do you think is the best way to carry the struggle forward? Some Occupy groups have hinted that — come springtime — they’ll set up new encampments in city centers and get back to doing the very visible kinds of actions that they began last October. Are traditional community organizing efforts (e.g., coalition-building with labor) not being fully exploited by the OWS movement?

NC: I don’t regard my own tactical advice as very significant. For example, if asked I would have opposed the Occupy tactic, assuming that it wouldn’t work, and I’d have been spectacularly wrong.
For what it’s worth, my guess is that this particular tactic has probably outlived its usefulness, at least as playing a central role in the movement, and that it is necessary to reach out to engage much broader constituencies, with careful attention and sympathetic concern for their own priorities, and efforts to integrate these into a broader movement of mutual support. Like the kinds of efforts you mention.

SCN: Speaking of broader movements, I’ve noted that in some of your past talks you have been critical of the overly narrow focus of social justice organizing. I would imagine the Boston area alone has dozens of little social justice organizations. It could be, for example, housing justice initiatives, promoting solidarity with people in Latin America, countering the influence of the military in public schools, or any number of issues. But how effective can they be on their own? Should they be forming alliances with more broadly-based social change movements like OWS?

NC: I don’t recall being critical of the narrow focus in itself. It is often well justified. But the atomization that is so prevalent in the society as a whole is harmful to individual movements, which could benefit greatly from participation in a common enterprise with many complementary facets. That is why for many years — many decades in fact — there have been efforts to create broader regional or even national and international coalitions. It hasn’t been easy, but it is clearly desirable. There’s a good reason, for example, why unions are called “internationals,” even though the term is much more of an aspiration than a functioning reality, as it should be, for the benefit of all.

SCN: Last month you went to Harvard to address a gathering of Boston-area OWS activists. Don’t you find it odd that the 99 percent movement gathered at the university of the 1 percent?

NC: In most countries meetings can be held at union halls — like when I talked in London a few months ago. Not here. The main functioning institutions are churches and universities, so meetings are commonly held there. I agree with you that there could have been a better venue. I suppose there were reasons for selecting that one.

SCN: In the 1980s Harvard was seen as a sort of scholarly refuge by Indonesian and Guatemalan generals. More recently, Georgetown gave a faculty position — Distinguished Scholar in the Practice of Global Leadership — to former Colombian president Alvaro Uribe, despite his horrendous human rights record. What do universities stand to gain — or lose — from such alliances?

NC: It was a refuge, as you say, and that gave an opportunity to activists. I was involved in both the Indonesian and Guatemalan cases (Lumintang, Gramajo). Harvard was keeping it secret, but I learned about it from activists on Indonesia and Guatemala, and groups here were able to organize very effective protests that drove Lumintang out of the country (one of my favorite ever Boston Globe headlines was “Indonesian general flees Boston”) and properly shamed Harvard. Alan Nairn, a wonderful person with a flair for the dramatic, waited for the Harvard commencement, and when Gramajo came up for his diploma, raced down the aisle in front of the TV cameras and handed him a subpoena — the State Department quickly got him out of the country. Was part of the Uribe protest too, but that time the protest didn’t prevent the appointment, though it had its effects. The US supported all of these gangsters, handsomely. So not surprising that Harvard joins in to reward them in its own way.

SCN: Lawrence Woods, a political scientist, conducted a survey a few years ago to see how often your writings are cited in undergraduate International Relations textbooks. From 1992 to 1999 only 8 percent of the texts contained citations of your work (and that’s including one extended footnote). A follow-up study looking at texts published between 2001 and 2004 didn’t turn up a single citation. How does this square with your reputation as the “most-cited living author”?

NC: I’m amazed there it was even 8 percent. And I suspect if you checked you’d find it was mostly condemnations. What else would you expect? How often do you think Howard Zinn, or other critics of US foreign policy, are mentioned? Sometimes, it’s truly scandalous. Gabriel Kolko’s pioneering work on the early Cold War is almost never cited in scholarly journals, though plenty of scholars crib from his insights.
The “reputation” is based on some survey of social science literature put out by the MIT PR office. Maybe accurate, maybe not, but not of the slightest significance.