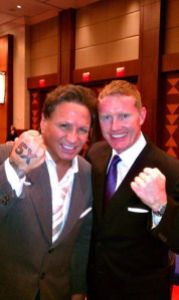 At 25 years old, John “Red” Shea was staring at a 12-year federal prison sentence for refusing to testify against his boss and mentor, James “Whitey” Bulger.

It was during those years in prison that Shea, who got into many fights defending Bulger’s integrity from behind bars, discovered that the man he respected and had fought so hard to protect had been an FBI informant for 30 years.

Although he now refers to Bulger as “the biggest rat of all,” Shea says he will once again remain silent if he is called to testify during Bulger’s upcoming trial in which he is charged with 19 murders. He says, “Integrity is everything in life.”

“You learn that from an early age growing up in Southie,” Shea said. “You don’t tell on anybody, you accept your responsibility, even if the other person can’t. You’re to be a man and keep your mouth shut. Period. There’s no gray area.”

In the 1980s, Shea says he ran a cocaine ring for Bulger, a man he wanted to emulate and would have died for. In 1990, Shea was among 51 drug dealers arrested in a joint investigation between the DEA and the State Police into Bulger’s involvement with drugs.

He was originally charged with running a continual criminal enterprise, which carried a 20-year mandatory minimum sentence. But in 1992, Shea pled guilty to conspiracy, using a telephone to facilitate narcotics transfers, and traveling interstate to deal narcotics. He was sentenced to 12 years in federal prison.

Since his release in 2002, Shea has authored two books: his memoir Rat Bastards: The Life and Times of South Boston’s Most Honorable Irish Mobster, and A Kid From Southie, a fictional story loosely based on his life. 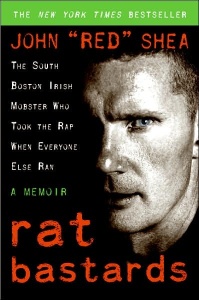 While Shea has since built his reputation around being a “standup guy,” at the time of his arrest, he had already developed an intense hatred for informants, which he compared to rapists and child molesters. According to the Boston Globe, the DEA and the State Police recorded Shea graphically describing what he would do to an informant during a phone conversation with his girlfriend.

Yet Shea never got the chance to demonstrate his abhorrence for informants on Bulger. By the time Bulger was publicly labeled an FBI informant in 1997, Shea was nearly halfway through his prison sentence. Although it’s been more than ten years since his release, he says Bulger’s betrayal still haunts him.

“He preached a sermon of being a standup guy every day, and about rats every day,” Shea said. “[He] talked about rats and how there was such a distain for them, and meanwhile here he was the biggest rat of all.”

Shea says he first met Bulger when he was 15 years old, and by then Bulger was already a legend in South Boston. Meanwhile, Shea was building his own reputation as a boxer, compiling a record of 60-6 and winning the Junior Olympic Championship three times, as he writes in Rat Bastards.

At the age of 17, Shea made his first trip to California with a trainer from South Boston in an attempt to become a professional fighter, but things did not work out. He later returned to California for another attempt at turning pro. This time he trained with Dennis Cardinale, who Shea met through his friend and future lawyer, Anthony Cardinale.

Though his dream of becoming a professional fighter didn’t work out, Shea said he had several memorable fights along the way, including a number of bouts against Lowell’s Micky Ward.

Shea said he had faced Ward once when he was 13, and then again when he was about 17. During their second fight, Shea said that tensions built up and they were both disqualified for continuing to fight after the bell.

Shea and Ward remain friends to this day.

“We were two little stubborn Irish kids, he was from Southie and I was from Lowell,” Ward said through his agent Nick Cordasco. “We’re very good friends now though. He is a great kid.”

Ward went on to win the World Boxing Union Championship and became immortalized by Mark Wahlberg in the movie The Fighter. Wahlberg also wrote the introduction to Rat Bastards, and briefly owned the movie rights to the book.

Shea, meanwhile, returned to South Boston and continued training and selling drugs on the side. While he still had aspirations of becoming a professional fighter, the power and money he could earn selling cocaine was too seductive.

“That’s when he turned in the wrong direction,” Cardinale said. “If he had stayed in the right direction… Johnny was a great fighter, I don’t know how far he could have gone, but he certainly had the heart to be a champion.”

Beginning as a small-time drug dealer, he started moving up, developing customers and even establishing his own supplier in Florida. Eventually, Bulger’s crew took notice, and Shea started working for them, while maintaining his own customers.

“I became part of the team,” Shea said. “They gave me the money, and I went down and I got the kilos and brought them back. Not only did I bring them back, I helped process the manufacturing of it when it got back here.”

It didn’t last very long. Shea said he was told by the head of Bulger’s drug organization to take some of the cocaine and add extra cut in order to stretch it out. He wanted him to sell it so they could split the profits.

Though Shea said he didn’t like the idea because he didn’t want to cheat his partners, he did what his boss told him to do. When Bulger found out, he started looking for someone else to run things. He had his eyes on Shea.

“That’s when I was put through the test,” Shea said.

In Rat Bastards, Shea writes that Bulger had one of his dealers shaken down. He confronted Bulger’s right hand man and top lieutenant Kevin Weeks.

He was then called to the South Boston Liquor Mart, Bulger’s South Boston headquarters. When Shea arrived, he said Bulger and Weeks each pulled out an Uzi and demanded to know information about where one of his friends kept his money.

When Shea refused to tell them, Bulger said it had all been a test. The next day, Shea said, he was promoted.

It was 1988; Shea was in his early twenties and had no idea that Bulger had just set him up.
“Bulger found out there was a DEA investigation, including wiretaps going on, because his FBI handlers told him about it,” said Cardinale, who represented Shea for a brief period after his 1990 arrest.

“Instead of warning all of the young kids that he had recruited, he basically got Johnny aside and told him that, you know, ‘I’m promoting you kid, you’re going to take over everything and you’re going to be my eyes and ears.’

“Basically what he was doing was putting Johnny out there as a sacrificial lamb, making as much money as he could in as short a period as he could,” Cardinale said.

Though Weeks credited Shea for standing up for Bulger’s integrity while in prison in his 2007 memoir Brutal: The Untold Story of My Life Inside Whitey Bulger’s Irish Mob, he also categorized Shea as simply a “mid-level drug dealer” whom Bulger once shook down for badmouthing them.

Weeks wrote that “Red was an agreeable and pleasant person, especially when he turned out to be a standup kid in 1990, going to jail for eleven years in a raid that netted 51 drug dealers. Rather than rat us out, he took it on the chin.”

Weeks continued, “Of all the drug dealers we dealt with, I liked Shea the best. He was a very tough kid and very honorable—his word was his bond. Although he was never in the inner circle with Jimmy, Stevie, and me, he was a person that I would have trusted. I wouldn’t say that about a lot of people.”

Shea argues that Weeks is trying to disparage him, and stated that he wouldn’t have defended Bulger in prison had he been shaken down.

“He contradicts himself, one minute he’s saying that, the next he’s saying Red’s protecting Whitey and Stevie in prison,” Shea said. “Why would I want to protect somebody who shook me down then?”

One person who’s always been in Shea’s corner is Cardinale, who says that “there’s no question” about Shea’s ties to Bulger. Cardinale, who refers to Shea as a member of his family, represented Shea for a short time after his 1990 arrest. That is, he says, until Bulger suggested Shea get another lawyer.

“Bulger interceded and basically got me out of the picture and put another lawyer in there, which I never understood until many years later what that was all about,” Cardinale said. “That was later when I found out Whitey was an FBI informant and basically he wanted to be able to control the kid, and he knew he couldn’t do that with me in that position.”

Cardinale added that as a fighter and as a gangster, Shea lived up to his reputation.

“He’s not big, but was very violent and very tough, and people are, to this day, scared to death of him,” Cardinale said. “If, God forbid, I ever needed somebody next to me and I needed backup he’d be one of the first guys that I would ever go to.”

About a year after Bulger was arrested, the U.S. Attorney’s Office released photographs taken inside his Santa Monica apartment. Sitting on a bookshelf next to Week’s memoir was fellow Bulger associate Patrick Nee’s book, A Criminal and An Irishman: The Inside Story of the Boston Mob – IRA Connection, and next to that, a copy of Rat Bastards.

Today, Shea works construction, has finished the screenplay adaptation of Rat Bastards, and is currently working with his agent on his third book. He declined to give specifics about its subject matter.

And if he’s called to testify, Shea said that, unlike Bulger, his integrity will remain intact.

“Just because another person’s willing to sell you out because they don’t have the integrity, or the guts, or the balls, that doesn’t mean that you need to act in the same manner,” Shea said.

“Sometimes you just need to suck it up in life and be the bigger, stronger person,” Shea said. “Two wrongs don’t make a right.”