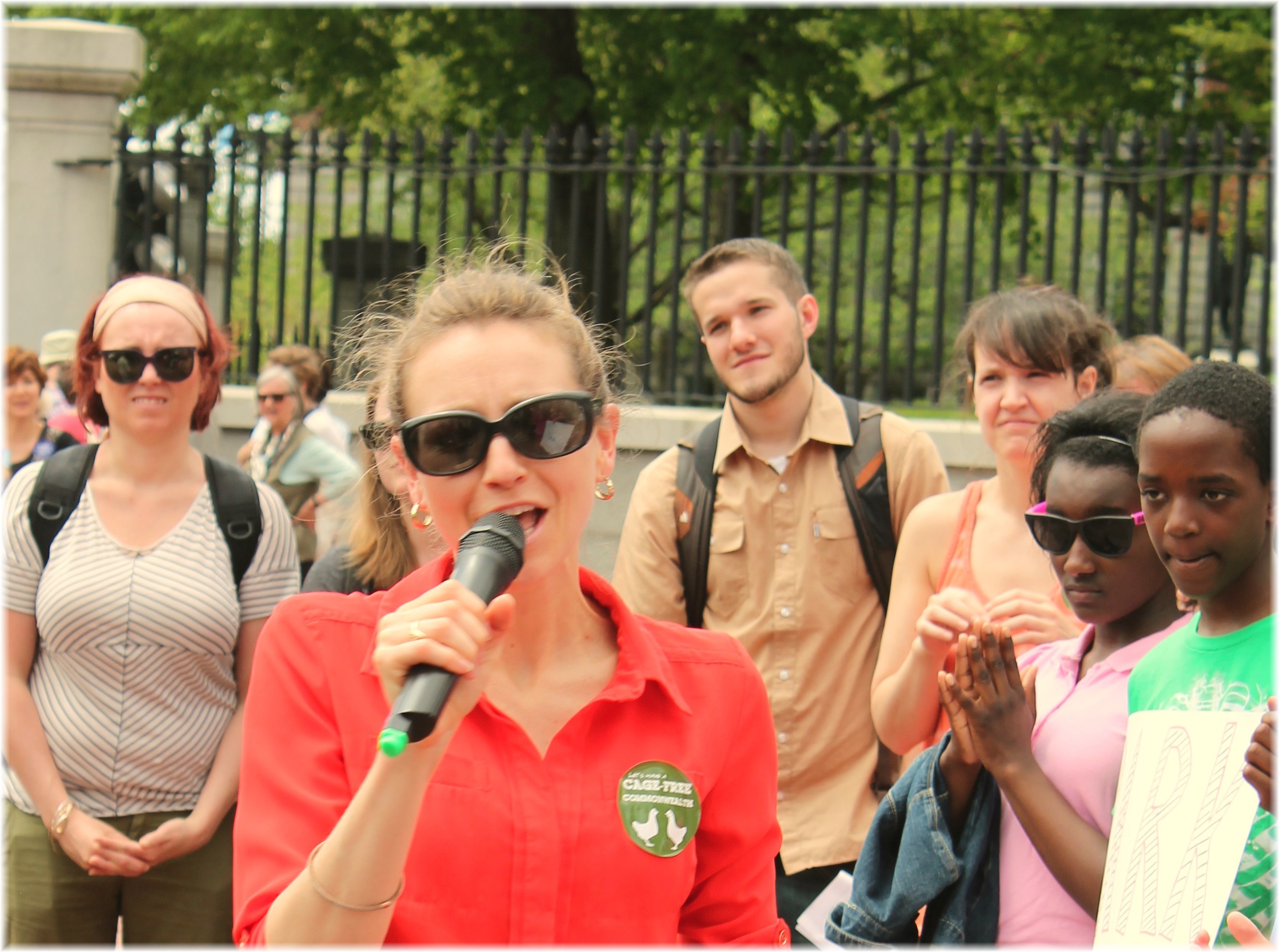 Photo By Michael Horan. Alexis Fox, Sate Director for the Humana Society of the United Sates, addresses the crowd

BOSTON, Mass.––Many consumers still imagine real farms to be like the idyllic farms displayed on their food packaging. However, many Americans are increasingly conscious of the much different – and, to many, much more disturbing – conditions that exist on modern factory farms.

Now, activists across the Commonwealth are promoting bipartisan farm-animal rights legislation in response to one North Shore farm’s plans to create gestation crates for pigs. The twin bills – H.1456 and S.741, called the “The Massachusetts Farm Animal Protection Act” – would ban the use of battery cages for hens, veal crates for calves and gestation crates for sows.

The bills’ sponsors, Senator Jason Lewis (D – Fifth Middlesex District) and Senator Bob Hedlund (R – Plymouth and Norfolk District), both joined over two hundred activists at a “Pups for Pigs” rally at the Statehouse on May 15.

“The intelligence and emotional capability of pigs is at least equal to that of dogs,” explained Jessica Dickard, a third-year student at New England Law School and an intern at the Humane Society. “While it is unlikely that pigs will ever gain an equal standard of respect to that which we give our dogs, the very least we can do is provide them with enough living space to stretch out and to turn around!”

The consequences of factory farming include massive recalls of tainted beef, ecological disasters created by runoff from manure pools, climate change, negative effects on human health from food products saturated with antibiotics and growth hormones, and the dangerous conditions under which migrant and low-income laborers – many of them undocumented – toil.

However, many activists find gestation crates especially disturbing. The Humane Society constructed a “human crate” that emulated the gestation crates used for pigs. Locked inside, it was only a matter of seconds before the panic set in. For many of the activists present, these devices exemplify a system that puts profits ahead of basic human decency at every turn.

“I don’t have any doubt that future generations are going to look back with utter revulsion at the ways in which we so commonly abuse farm animals in our era,” Paul Shapiro, vice president of farm protection at the Humane Society U.S., told the crowd. “[T]hey’re going to be astonished that there was even a debate as to whether farm animals ought to be allowed to stand up, lie down, turn around and extend their limbs.”

Hedlund addressed what he called “very strong special interests on the other side of the issue that are able to use their influence to prevent a bill from ever coming out of committee.” Indeed, the Act is currently resting comfortably in the Judiciary Committee. But Cara Holmquist of the Massachusetts Society for the Prevention of Cruelty to Animals also pointed out that grassroots activists have had success in the Commonwealth – prohibiting certain types of traps, making animal abuse a felony, banning greyhound racing and removing legislation that discriminated against certain dog breeds.

Dickard echoed that sentiment. “This bill would discourage factory farms from incorporating in the state of Massachusetts, preserving the business of local farmers, and protecting the environment from the detrimental effects of high-volume farming operations,” she said.

That might be good for more than just the economy. “Study after study shows that animals raised in confined spaces, such as gestation crates and battery cages, significantly increases the rate of dangerous pathogens like e. coli and salmonella in our food when compared to more humane practices,” local nutritionist Micah Risk-Uspensky explained.

Philosopher Jeremy Bentham framed the question of animal rights like this: “The question is not ‘can they reason?’ nor ‘can they talk?’ but ‘can they suffer?’” Nine U.S. states, along with Canada and the European Union, have already answered Bentham’s question in the affirmative and decided to act on it by banning gestation crates. As Massachusetts considers banning the crates, too, activists would remind us that animals here are just as capable of suffering.