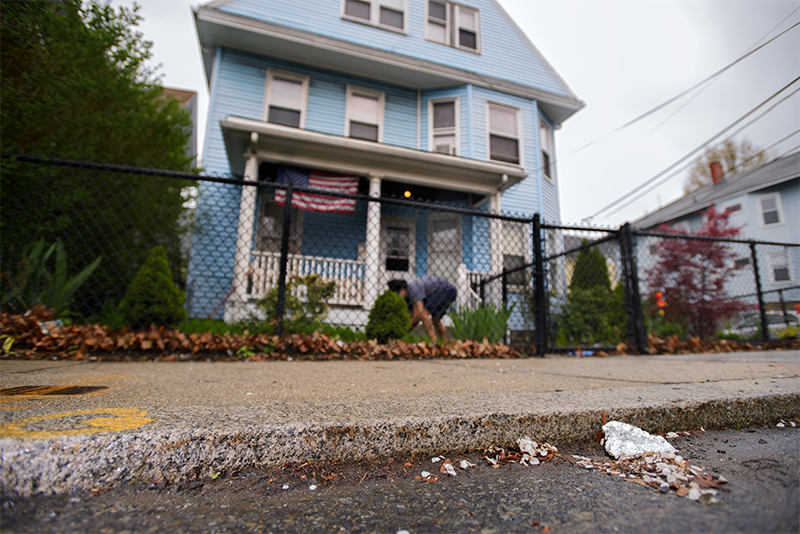 ALLSTON, Mass.­— On January 26 at 2 a.m., two men – C. J. Parsons and Anthony Varrichione – allegedly assaulted a homeless man named Michael Hudson in front of a house on Allston St., where the two men were at a party. According to witnesses, Hudson had been asking for money After telling him to go away, the two men allegedly came over and began beating him.

According to Assistant District Attorney Spencer Lord, the assault ended when a woman passing by threw herself onto Hudson to shield him. A witness called 911, and an ambulance rushed Hudson to Beth Israel Deaconess Medical Center. He is expected to live, although he has no memory of the assault after his assailants reportedly kicked his head into the curb repeatedly.

Authorities released the two men on their own recognizance after their arraignment on April 23, and they will return to court for their trial on June 4.

The district attorney’s office has called 17 witnesses, some of whom also helped to identified Parsons and Varrichione as the assailants.

“Thanks to the effective early investigation by Boston police, we had significant traction going into the grand jury, where we put witnesses under oath and got solid, reliable evidence,” District Attorney Daniel Conley said in a press release. “The result isn’t just an indictment – it’s a case that’s been fully fleshed out well in advance of trial.”

Anthony Varrichione is a former backup quarterback at Marist College in Poughkeepsie, N.Y. The other suspect, C. J. Parsons. was a tight end at Boston College and would have graduated this spring.

“Boston College issued an immediate suspension that bans Mr. Parsons from the campus and any BC-related activities until the matter is resolved,” B.C. spokesman Jack Dunn said in an email.

The assault on Michael Hudson is not an isolated incident. In fact, it is part of a nation-wide trend.

According to the National Coalition for the Homeless (NCH), there were 1,436 attacks on homeless people by housed individuals between 1999 and 2012. Of those, 376 – or 26 percent – resulted in the homeless person’s death. In 2013, there were 108 attacks on the homeless nationwide, including 19 lethal incidents. Those numbers do not include the numerous incidents that go unreported.

NCH has not yet released information about assaults in 2014, although they confirmed to Spare Change News that the January 26 assault on Michael Hudson will be included in their next report.

In 2013, there were three assaults on the homeless by housed persons in Massachusetts.

On August 28, 2013, two 17-year-old boys assaulted a 33-year-old homeless man in Springfield twice. They threatened him with a knife, demanding his belongings. The homeless man called the police and left. The two boys then followed him and warned him not to call the police, threatening him with the knife again. The police came and arrested the two.

Another incident happened on September 14 in Brockton, where a twenty-something came up and asked a homeless man sitting on a bench for a cigarette. The man said he had none, and the perpetrator stabbed him. The victim was taken to the hospital with serious injuries but fortunately survived. Police have not yet found the assailant.

“Anytime a human being is attacked, no matter if you are housed or homeless, it’s hideous, an act of violence that should never occur,” said Robyn Frost, executive director of the Massachusetts Coalition for the Homeless. “For someone without housing, you know, it’s even more devastating not having a place to go back to to recuperate.”

Based on what he knew, Joe Finn, executive director of the Massachusetts Housing and Shelter Alliance (MHSA), could not say for sure why the two college football players attacked Michael Hudson.

According to the NCH’s statistics, the assault on 50-year-old Michael Hudson was a textbook case of housed persons assaulting a homeless person. Thirty-eight percent of those assaulted are at least 50 years old – a plurality of the assaults that occurred between 1999 and 2012. In addition, 88 percent of victims are male.

Likewise, 81 percent of perpetrators are under 30, and 96 percent are male. Parsons and Varrichione were 22 and 23, respectively, at the time of the assault.

“When a group of young adults just physically starts whomping on a person, just for the hell of it – they might not do the same thing if they were attacking a businessman or woman,” explained Michael Stoops, director of community organizing at the National Coalition for the Homeless. “When people are attacking homeless people, they have an animosity or a hatred, or they have some reason why they’re biased against homeless individuals.” Stoops is responsible for writing the NCH’s reports on violence against the homeless.

Between 1999 and 2012, the most frequent instances of violence against the homeless occurred in California and Florida, with 258 and 217 incidents, respectively. There were more than twice as many assaults in these states as in the next highest state, Texas, which had 79 assaults in the same time period. California had the most attacks in 2013, with Florida coming in second.

“In tourist or sunshine states, there’s a greater disdain for the homeless population, and in many of those – California, Florida, etcetera – the cities are passing laws making it illegal to be homeless. I think that gives the impression to the immature teenagers or young adults that society wants to rid the city of homeless people,” said Stoops.

NCH is trying to give added protection to homeless people by lobbying for the homeless to be included in state and national hate-crimes statutes. So far, six states have given the homeless protection under their hate-crime laws, starting with Rhode Island in 2010. Legislators have proposed similar legislation in Massachusetts, but it has yet to pass.

A Homeless Bill of Rights, as it is being called, would increase the punishment for assaulting a homeless person, as they homelessness would be a protected class. The NCH proposes several other stipulations they believe should be included in a Homeless Bill of Rights, including giving law enforcement special training in dealing with the homeless and awareness campaigns about homelessness in high schools.

The NCH does not include homeless-on-homeless violence or attacks on the homeless that they determined to have no bias in their data. They determine whether or not the attack was committed because the person was homeless by analyzing police reports and reading news articles about the assault.

It is often difficult for NCH to determine whether they should treat an attack as a hate crime.

“Sometimes, even if there was [a slur] said by the perpetrator, investigators and the prosecutors office will check computer files, Facebook postings, etc. to see if there’s any additional written or verbal evidence to indicate that this was a possible hate crime,” said Stoops.

“For all we know, they might have just thought this guy was an annoying person from some place else. This doesn’t make what they did okay, but at the same time it’s still significantly different from someone who deliberately sets out to commit a violent act against someone because they are homeless,” MHSA’s Finn said, in reference to the Michael Hudson assault. “When you try to stretch it out in terms of the larger issue of homeless victims of violence, it’s hard to draw too many conclusions just from that particular story.”

The NCH’s report includes what they call ‘multimedia exploitation,’ including the posting of videos on YouTube of homeless people beating each other up or doing dangerous stunts. The NCH has waged a campaign against such videos for about a decade. However, as public use of the internet has grown, so too has the practice of posting ‘bum fight’ videos.

The two football players only stopped kicking Hudson when a woman threw herself on him. She probably saved his life.

“I think anybody would have done the same thing,” she said to the Boston Globe.

“If she had actually stopped and contemplated this, would she have done the same thing? I don’t know,” said Karen LaFrazia, executive director of Boston’s St. Francis House. “I still believe, in spite of this horrific situation, that people are inherently good.”

It is unclear whether the woman, who remains anonymous, knew Hudson was homeless when she rushed to his aid.

“I think that the message of this story is for us not to focus on the negatives of a few outliers that were motivated by their own anger, or hate, or whatever was in their hearts,” LaFrazia said. “The real story here is the woman, who, when presented with an acute situation, tapped into that inherent goodness in her and reacted.”

Too often, witnesses to an assault simply remain bystanders, or, even worse, film the incident and put it on Youtube. LaFrazia believes these assaults would not happen if the assailants knew the circumstances of their victims.

“I believe to my core that if everyone knew the story behind the picture that they see, somebody sitting in the park, someone hanging around St. Francis House,” said Lafrazia, “if they knew them as human beings, it would be a call to action. They would be compassionate, they would be understanding.”