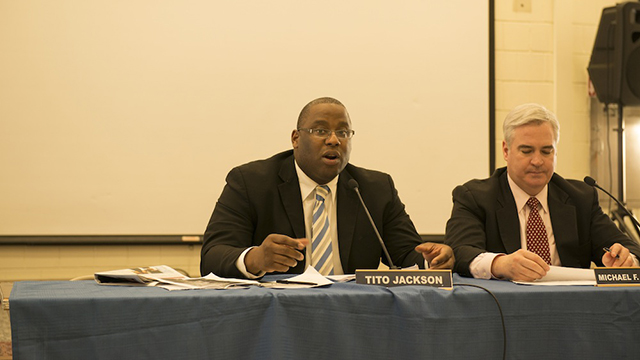 BOSTON, Mass.—Boston’s city council saw two bills introduced for discussion this year about issues that concern black youth, both of which passed with ease this February. Councilors Michael Flaherty and Tito Jackson led the discussion with more than 60 black residents from all over the city during a hearing at Madison Park High School in Roxbury on May 1.

One of the bills helped create a commission on the status of black men and boys in Boston. 13 Boston City Councilors voted unanimously February 26 this year to pass the bill, which is also sponsored by Jackson.

According to Jackson, unemployment rates in the black community are also disproportionally high. He said that in neighborhoods with large black populations, such as Mattapan and Dorchester, the unemployment rate is higher than the state average by 25 to 30 percent.

A recent study by Northeastern University showed that 1,000 black students drop out of Boston public schools each year. Some 28 percent of high school dropouts between the ages of 16 and 24 will be in jail on any given day of the year, according to the study. On the other hand, according to Boston Public School’s website, the annual black dropout rates is 4.5 percent. By comparison, the dropout rate for Hispanics is 5.2 percent, 3.8 percent for White and 2.2 percent for Asians.

“These dropouts’ median annual income is $2,600 a year. They are in a very, very difficult situation,” Jackson said. “When it comes to healthcare disparities, when a black man in the state of Massachusetts gets prostate cancer, there is a 250-times-higher percentage rate of dying than his white counterparts. We, as a city, need to target these issues.”

One member of the newly created commission, sixty-year-old Horace Small, feels that Boston is the most difficult city for black people to live in. “Boston is powerfully racist,” said Small, After who has worked and traveled across the country his entire life. That makes it hard for young black men to thrive.

“I’m a civil-rights activist, and part of many social-justice and nonprofit organizations,” said Small, who is also the executive director of the Union of Minority Neighborhoods and co-founder of the Committed Brothers Network. “Black people are still on the bottom rung in terms of socio-economic level. Some of us have no ability to access education, jobs and many other resources.”

In March of this year, the Boston Globe reported that Boston leads the nation in gentrification. “More than a quarter of all Bostonians now live in formerly low-income neighborhoods that have been gentrified,” the article said.

Neighborhoods with a high black population, like Roxbury, are gentrified as well.

“[More and more black people] are moving to Lynn, Worcester and Brockton,” Small said, noting that some black people are forced into those less transit-accessible communities through the long, complex process of gentrification.

The second bill that the council passed helps create an Office of Reentry to help former inmates re-enter the community and, as Small said, “meet their basic needs, such as food and places to stay.”

Councilor Ron Bell knows the consequences of gun violence, mass incarceration and systemic racism all too well. He choked up while talking about how he lost his brother.

“My brother died on Christmas in 1992,” Bell said. “He was fighting with another black guy, then he was dragged to death. We found his body on the side of the road.”

After losing his brother, Bell founded Dunk the Vote, a Boston-based nonprofit organization dedicated to increasing civic participation and promoting social change by employing a contemporary style, such as sports and musical events to engage the interest of young people.

Not everything went well in this good-willed organization. After a boy who used to be part of “Dunk the Vote” died and was buried in Mission Hill, Bell says that someone dug the body up and put another body into his grave.

“That was ten years after I lost my brother, when I was still at Mission Hill Committee,” Bell said. “I ended up attending 15 to 20 funerals that year. Then I burned out in 1996. I’m just sick and tired of black boys being killed and unemployed.”

In the end, Bell shared a quote from Fredrick Douglass to exhort the black community to remain united: “We are one, and our cause is one, and we must help each other if we are to succeed.”