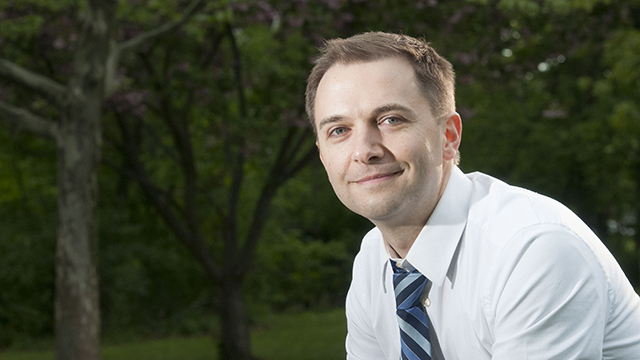 BOSTON, Mass.—After nine years representing the 34th Middlesex District as a state representative, Carl Sciortino of Medford left the legislature last month to join the AIDS Action Committee of Massachusetts as its executive director. He formally announced his resignation in March, effective as of April 7.

In the legislature, Sciortino served on the Joint Committee on Public Health and has sponsored numerous bills aimed at improving the mental and physical health of his constituents, including a 2012 bill to increase access to HIV testing across the state. Sciortino was also the only openly HIV-positive member of the state legislature – a personal experience that has motivated his tireless advocacy for those affected by HIV and AIDS.

With this personal connection and his background in advocating for HIV research, Sciortino says he feels like this new job is bringing him closer to his original focus. He sat down with Spare Change News recently to discuss his new position in more detail.

How did you hear about this opening?

I was contacted by folks at both Fenway Health Center and AIDS Action a few months ago. I just finished the congressional race last year and was ready to dive back into the State House so I was not immediately sure I would pursue it. But the more I talked to them and the more I learned what the position was and what the opportunity was, I got really excited.

How has it been, leaving early in your term as representative?

It was a little bittersweet to leave legislature altogether. I had been there for nine years and I had a lot of constituents and colleagues expressing that they were sad or upset or disappointed or wishing I wouldn’t leave but all with very supportive comments as well.

Why did you ultimately decide to make the switch?

You started college as a biology major at Tufts University then switched to public administration. What changed your mind?

I was working for a year in a research lab at Israel Deaconess medical center working at an HIV research lab … So this is something that, professionally, I was very interested in doing since I was actually in college. I got into politics in 2004 at the height of the marriage equality debates. It was immediately after the state Supreme Court issued its ruling in support of marriage equality. I met with my state representative who was a very conservative democrat and he very vehemently disagreed with me on whether we should preserve marriage equality and have gay marriage in the state. So I ran against him and took a leave of absence from working at Fenway Health to run against him and managed to win … I found myself loving the state house, loving the work I got to do there. But in some ways going to AIDS Action now feels like stepping back on to the path I started fourteen years ago after college.

With your personal connection to HIV how do you think you’ll be able to contribute to this position?

I’ve been public in my announcement of taking the job at AIDS Action that I have been living with HIV. It’s my hope that in sharing parts of my personal story I can give another face to what the epidemic is today and be a stronger advocate for people living with HIV in the state. And also hopefully spark some conversations about why it is that there are some populations that are still uniquely vulnerable to getting infected 30 years into the epidemic.

I remember when I was first diagnosed being told by my doctor that HIV in many ways is easier to treat now than diabetes. But like a diabetic it requires constant vigilance over your health and well being. And not everyone has enough support in their lives, to have the stability in their lives to manage that kind of condition.

Do you have any ideas of how you want to help out in those specific areas?

Part of it I think that’s important for AIDS Action to be really tackling head on is the issue of stigma and there are lots of reasons why people choose not to disclose our HIV status, there are lots of reasons why people don’t even go get tested in the first place. Much of which relates to stigma around HIV that still persists. In some way the stigma around HIV has gotten worse not better since treatments have improved.

How has it been so far?

It’s amazing – I absolutely love it. It’s a great organization. I am incredibly impressed with the staff and commitment to the mission I’ve seen in my first two weeks I’ve seen here … One of my first days here was out in the front, where there was a client that was concerned about going inside. They weren’t sure what they were even looking for – they were just showing up. And there was a person outside just talking to them and making sure they felt warm and welcomed and was able to bring them in and nearly, literally hold their hand … showing them they had a place to be.