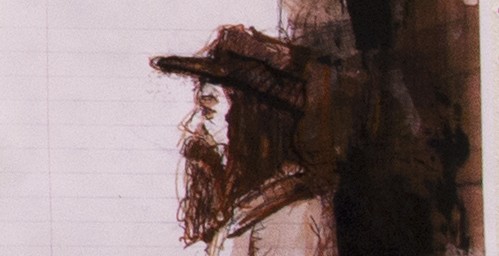 During the month of April, the Central Square branch of the Cambridge Public Library hosted a gallery of local artist David Andrus’ drawings of the homeless in Central Square. The gallery was taken down April 30.

The drawings were mixed medium. For his posed portraits, Andrus used charcoal. However, his main way of working involves sketching his subject quickly, and from a distance, while he is on the street. He then revisits the sketch when he returns to his studio, where he may add a wash. For two of his drawings he used ballpoint pens, without a wash. He said he does not like to be constrained in his means of creating his work.

“It’s done in a state of hyper – almost like – not a combat awareness, but a super, hyper awareness. I have the pencil, I’m moving very quick, I don’t know if the person is moving. Even though it might be two or three minutes, there is a lifetime of energy going on there,” said Andrus.

He decided to draw the homeless because they were a part of the Central Square environment. He also saw them as the most raw form of humanity. He also said that as an artist he has lived on the economic edge, and often been close to becoming homeless.

“I’m interested in humanity. I’m interested in people and I’m a figurative artist. I think, in some ways, homeless people are – it’s like humanity exposed, it’s raw. Most of us are covered up and hidden in our lives – behind walls and inside houses, whatever – but a homeless person, they are right out there,” said Andrus.

He contrasts his style of sketching with photography, which he says captures too much information about the scene for his purposes. He likes to capture his subjects in a more abstract and interpretive way; the way artists did before the invention of the camera.

“All those drawings I made, in a way, they’re very sloppy. I think most people would think that. It’s the very sloppiness that I wanted to show. I’m searching, each line is a search,” said Andrus.

He added that his drawings have a lot to do with memory. Since he captures the moment so haphazardly, then finishes them in the studio, he said the final piece is often very different from what was actually there.

“Maybe if I drew you, maybe your own mother wouldn’t recognize you. Maybe I would capture something else, something a camera can’t get,” said Andrus.

He said he chooses not to include any drawings where the identity of the subject is clear, both for ethical and stylistic reasons. This is one of the reasons he likes to draw from a distance, so that he cannot perceive every detail of his subjects face. He also said he will never erase while he is sketching on the streets, but he will occasionally remove something when he gets back to his studio.

“Someone saw me the other day, and I could see they were thinking, ‘This guy doesn’t know what he’s doing.’ And I thought, ‘That’s good, that’s fine, maybe I don’t know what I’m doing; I’m still learning.’ I would rather not know what I’m doing, and try and grow, than think that everything I do is really good,” said Andrus.

Andrus said his project wouldn’t have been possible without the Puffin Foundation’s help.