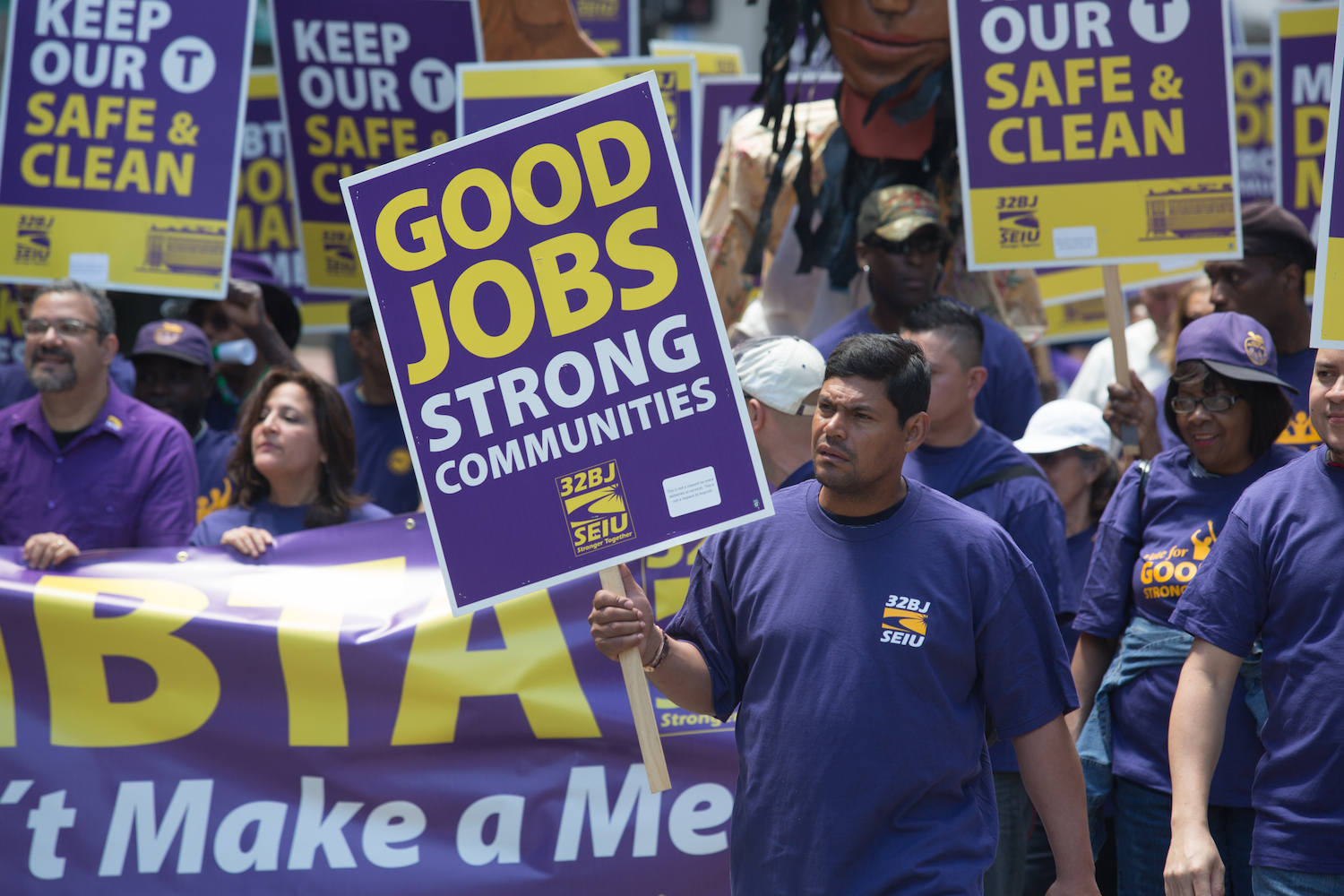 BOSTON, Mass.—On Saturday June 22, MBTA station cleaners and their supporters marched through downtown Boston and rallied in the Boston Common to protest upcoming staff cuts that would eliminate 30 percent of the cleaning workforce on September 1.

The rally attracted 1,000 people, according to police reports, and was the latest event in cleaners’ campaign to stop the staff cuts. Cleaners and their allies claim cutting one third of the current workforce would create an unsustainable workload for remaining employees and lead to unsanitary and unsafe stations, with cleaners citing the fact they clean blood, urine, feces, and vomit on the job. Currently, 315 workers clean the MBTA stations.

The march began at the State Transportation Building and flooded onto Boylston Street with purple shirts (the union’s official color), loud speakers, drums, a brass band, and chants in Spanish and English. The march also went down Washington Street and ended at the Parkman Bandstand in the Common with a series of speakers.

Roxana Rivera, Director of 32BJ SEIU 615, which represents the cleaners, spoke first, in both English and Spanish. “The MBTA is saying that it’s OK for one worker to the job of two people. Is that fair?”

“With cleaning service cuts, I may lose my job. How will I pay my bills and support my family? What if the health insurance that covers us is taken away?” said Auxilio Rodriguez, a MBTA Blue Line cleaner of 13 years. “We’ve been fighting for years to make our jobs better and safe. These cuts are going backwards, not forwards.”

Additionally, 52 state legislators—37 representatives and 15 senators—have signed a letter supporting the cleaners and urging Transportation Secretary Richard Davey to halt the cuts. The cities of Cambridge and Revere have also issued statements of support for the cleaners.

The MBTA itself isn’t overseeing the personnel cuts. The cleaners are employees of two companies contracted by the MBTA: SJ Services (SJS) and ABM Industries. SJS is responsible for 79 of the 90 at-risk positions. SJS oversees employees in Work Areas 2 and 4, which cover the Red and Blue lines north of Downtown Crossing and the Orange Line south of Downtown Crossing.

The cuts are the result of last year’s switch to what the MBTA calls “performance-based management,” expecting advanced equipment to make up for fewer workers. Companies no longer have to follow prescribed staffing levels. The MBTA also began five-year contracts with these companies, which required them to maintain staffing levels for the first year, after which they can reduce staff. Proposed staff reductions were part of the bidding process and approved by the MBTA. September 1 begins the contract’s second year.

However, Secretary Davey and the MBTA do have the authority to intervene and stop the cuts. “The MBTA…specifically reserves the right to require that the contractor make changes to its staffing schedules or cleaning plans if the MBTA, in its sole discretion, determines that such changes are necessary to achieve performance standards at no additional cost to the MBTA,” said MBTA spokesperson Joe Pesaturo. Pesaturo also said “There are no plans at this time to interfere with the contractors’ personnel plans.”

Earlier this month, 32BJ organized a legislative briefing in the State House to discuss the upcoming cuts. The briefing featured testimonies from MBTA janitors and words of support from state Senator Anthony Petruccelli and state Representatives Marjorie Decker, Dan Ryan, and Dan Cullinane.

Cleaners also joined Youth Pass activists from ACE to raise their concerns at MassDOT’s monthly board meeting on June 18. However, heightened security resulted in dozens of people being shut out of the meeting.

This may have been a response to last week’s sit-in, which was held by Youth Pass activists in response to seven years of unfulfilled demands for a pilot program. No one was allowed to sign-in and enter the boardroom until 15 minutes before the 1:00 p.m. meeting, which organizers found unusual. Soon, people were shut out of the meeting due to capacity concerns, according to security, though journalists and activists tweeted pictures of empty seats.

At the board meeting, MassDOT chair John Jenkins, cited a large agenda for the day, and cut down the public speaking lists: only two people representing the cleaners were allowed to speak, and only three could speak for the Youth Pass crowd (25 people had signed up for the latter). Those who were shut out rallied in front of the Transportation Building, and their chants were heard from the third floor boardroom.

“I’ve cleaned blood, vomit, you can imagine,” said Jorge Rivera, MBTA cleaner. “The worst things I’ve seen are needles. I try to keep those away from kids.” Roxana Rivera followed, joined at the podium by five cleaners who wouldn’t get the chance to speak, and warned the board that the cuts would lead to an unsustainable workload.

The cleaners’ fight is far from over. Councilor Zakim announced to the crowd on Saturday that the Boston City Council would hold a hearing on Monday, June 30 to investigate the cuts.