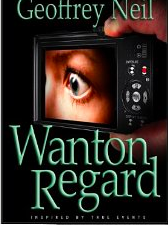 As I read “Wanton Regard,” I wondered what kind of mind Geoffrey Neil must have to be able to come up with a fiendish character like Gage Dolon. This is Geoffrey Neil’s third book and his writing is every bit as good as Stephen King’s or Joe Hill’s. The only difference is that he deals with what is real rather than the supernatural. This makes his writing all the more terrifying.

Hailey Vaughn doesn’t know what it means to live in a digital age where someone who is obsessed with you can watch your every move and listen to everything you say at home, in the office and even in your car.

But there is a guy – we’ll call him Gage Dolon because that’s what he calls himself – who is totally obsessed with Hailey. He watches everything she does and even manipulates aspects of her life without her being aware of any of it. That is, for the time being.

In “Wanton Regard,” Neil has created one of the most monstrous villains I’ve ever read. Gage Dolon has big plans for Hailey. To make matters more complicated, Hailey has a husband named Mason who is extremely jealous and loves guns.

Hailey Vaughn is the maiden in the middle. She likes to go to a place called Hot Perks every morning and order a medium half-caf, no-foam, non-fat, vanilla soy latte. A barista named Marissa always makes the drink for her, exactly as she likes it.

Gage is aware of this. Extremely aware. Frighteningly aware.

Let’s leave Marissa at Hot Perks for the short time that she has left there and go back to Hailey Vaughn at the office where she works. She has just received a call from Gage Dolon, or whatever his name might be, about her notepads that she left behind while at a conference called the Small Business Growth Expo.

Gage is sitting in his car, parked at a vantage point from which he can see into Hailey’s office window. He offers to return the notepads, his voice is so gentle and suave. While he speaks to her, he watches a live feed of a high-definition mini-cam loaded with footage of Hailey.

Hailey is flattered that this man, Gage, is willing to go through so much trouble for her. There is so much that Hailey has to learn and Gage Dolon wants to be her teacher. Hailey is not yet aware of the trouble Gage has gone through to gain access to her life.

Mason, Hailey’s husband, works nights and goes to the gun range almost every day. Hailey hates guns but Mason thinks that Hailey should learn how to handle one for her own safety. Mason is also concerned that Hailey is having an affair with her assistant, Robert.

The front of the book says, “Inspired By True Events.” The deeper I go into the book, the more it makes me think of certain events that I have read of in the news. I can’t tell you what they are because I want you to read this book. Why should I have all the spine-tingling pleasure of watching an electronic net cast so carefully around Hailey Vaughn.

I’m a little ahead of myself. Hailey, flattered by Gage’s attention, agrees to meet him at a hotel and has dinner with him. She is utterly charmed. Gage is skillful and he quotes his father – “Fate don’t negotiate” – as he tells Hailey that it was fate that brought them together.

Hailey isn’t fooled. Or is she? The net is cast. Her jealous husband is cleaning his guns. Hailey is drinking a little too much wine. The electronic devices are silently spinning a web, like a spider wrapping its meal for later. Have you ever seen an insect struggling as the web surrounds it?

As I read, I think of a song that was popular in the 1950s. It was called “Sincerely” and one of the lines in it went like this: “and I’ll never ever ever ever let you go, sincerely.“

This is Geoffrey Neil’s third book. Like his first two, “Dire Means” and “Human Resources,” it gripped me. Like Hailey, I found myself in the snare. I started reading “Wanton Regard” on a Saturday night and finished the story before Sunday evening. I would advise you not to start any of Neil’s books unless you are ready to set aside the next day or two to live in his world.