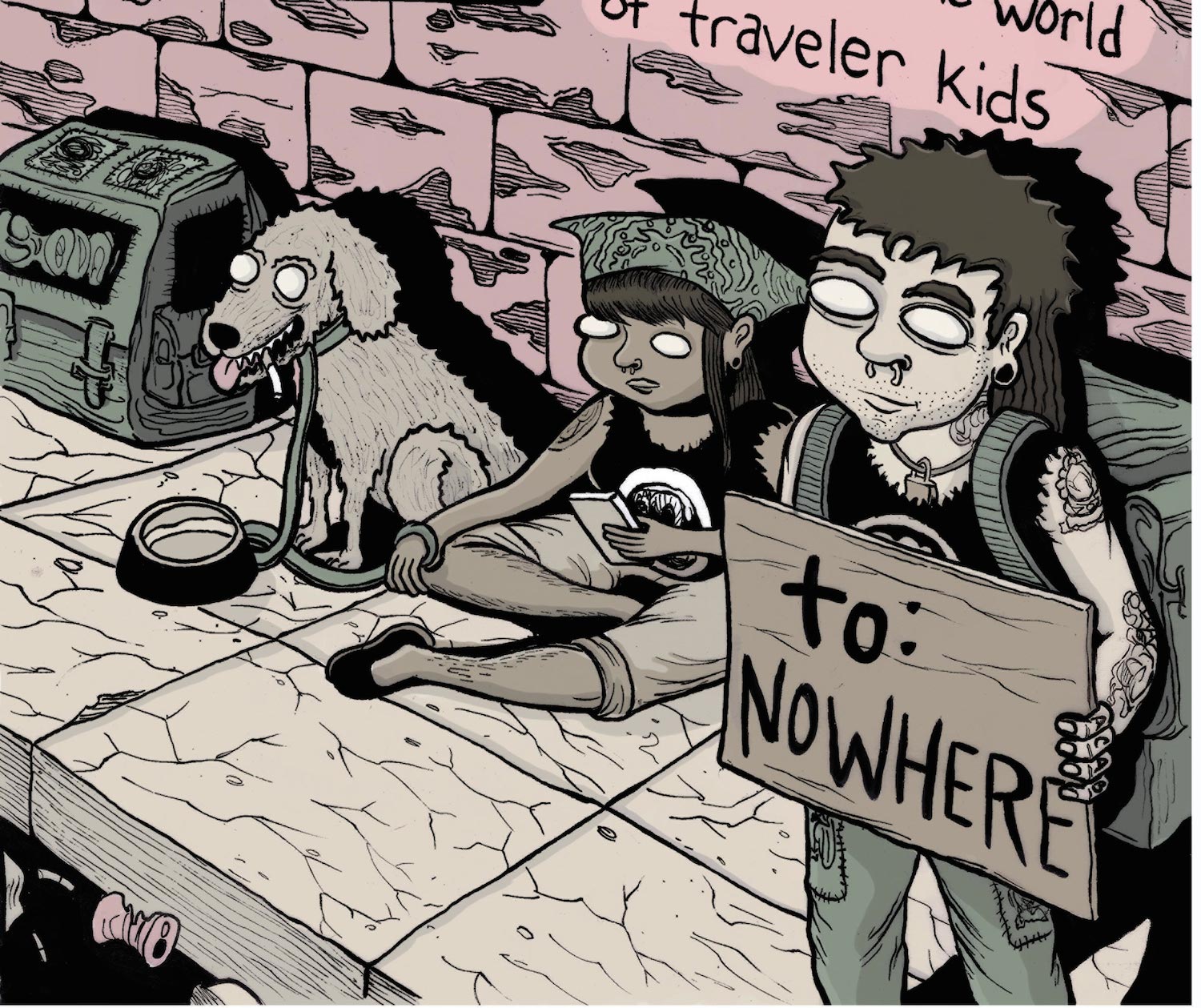 Victor sits alongside his girlfriend, Tab, and their friend Levi on a sidewalk in Allston. A “Born to Die” tattoo snakes up his neck, and the letters A-C-A-B decorate his knuckles.

“All cops are bastards,” he explains.

He wears an open, camouflage-green vest with no shirt, his skin blackened from dirt collected along the road. A septum gauge hangs under his nose. The group looks like they walked straight out of “The Road Warrior” onto the streets of Boston.

They go by the terms traveler kids, hobos, gutter punks and “oogles”. They carry oversized army surplus backpacks, have piercings and tattoos and listen to all the incarnations of punk rock. They panhandle or work part-time jobs. Most importantly, they ride freight trains.

Hopping freights became popular after the American Civil War, mostly among migrant workers who could not afford any other mode of transport.

The gutter punk movement re-popularized this unusual mode of transportation.

Victor said he first began traveling when he was 15.

“I ended up homeless at 15, and I would hang out around the downtown Cincinnati area. … I ran into someone who rode freight trains, and I was like, ‘People don’t do that no more. Nobody does that.’ And he’s like, ‘Yeah they do, and you can come with me.’ And three weeks later, I was gone. I left with a little school backpack which had nothing but a sheet and a hoodie in it,” he said.

Victor, Tab and Levi rode a freight train to Boston from New York. They plan to stay for a few days before moving on to Maine for the blueberry harvest.

Harvesting is a popular way to make money for traveling kids, said D. J., currently in Pennsylvania. He founded and runs a blog about travelling kids at latfo.com, which stands for “Look At This Fucking Oogle.” D. J. plans on travelling to Minnesota for the sugar beet harvest in October. Between harvesting, panhandling and temporary work doing anything from cooking to building computers, he said that he makes enough money to live.

D. J. prefers not to be called a gutter punk or an oogle, identifying more with the terms traveler kid or hobo. Gutter punk has negative connotations, he said – more like a “junkie kid.”

Traveling on freight trains presents many dangers, starting with actually getting on the train. Some travelling kids jump on moving trains, D. J. said, going at speeds he guesses to be around 15 miles per hour. For safety, he only gets on stationary trains.

Kids getting on trains must also consider which car to hop onto. Victor prefers to board open boxcars, as opposed to cars with a narrow, shutting door, because if the door shuts while he is on board, it locks from the outside. In addition to the possibility of becoming locked inside, the very cargo the trains carry can be dangerous.

“Our friend Reggie that we were just with was in with four other kids, and they were in a loaded gondola with I-beams,” Levi said. “What happened was that the car disconnected and started humping the trains. It stopped all of a sudden, and all the I-beams slid and killed four kids. He broke his foot. He’s the only one that lived out of all of them.”

When riding a boxcar with a closing door, Levi sometimes props the door open with a railroad spike to keep it from closing. Victor added he usually carries a cell phone while on board so that he can call the police if he gets trapped inside.

Before adopting 21st-century means of communication, like Facebook and cell phones, travelers relied on small graffiti tags called sign-ins to let each other know where they had been and were they were going next. Despite technological advances, tagging still persists.

When boarding an outgoing train, Victor said he writes NBD for northbound, or EBD for eastbound, etc., followed by the date he left and his initials. Some traveler kids will instead draw an arrow with tracks across it, to resemble a railroad, pointing in the direction of the train they boarded.

“I think it’s just sort of marking where you were. It doesn’t really have to do with letting your friends know anymore,” said D. J.

There is more to traveling than just riding freight trains. There is a look, music and an entire subculture that saturates the movement.

“Basically it’s all just centered around punk – punks who just are homeless and end up traveling around,” D. J. said.

Crust punk and, increasingly, folk punk are popular in the traveler kid scene. Other kinds of music are popular as well, including death metal and even hip-hop.

Victor, Levi and Tab are panhandling two blocks from Brighton Music Hall, where The Subhumans, a crust-punk band, and Mischief Brew, which is more of a folk-punk act, will perform in two days. They hope to raise the 40 dollars each for tickets by the time of the concert.

“We will just find a way in there if we don’t have enough money,” said Victor. “The Subhumans are some of the, like, originators of punk rock. They’re still touring, and they always have been touring.”

A man walks past and Levi asks, desperately, “Sir, can you spare any money?”

The man hands them a 20-dollar bill, and Levi is ecstatic. Victor said he aims to save the money, and any more they make, for the show – that is, if he doesn’t spent it on beer first.

A dog may be man’s best friend, but travelers depend on dogs for survival and companionship.

Victor said he typically gets the dogs as puppies, fostering the bond between dog and owner from early on. He and other travelers clip the dogs to their backpacks, where they keep the dogs’ food, at night. The dogs serve as guards while they sleep.

D. J. said he likes having a dog primarily for companionship, but the security a dog offers is an added bonus.

“I’ve even met a lot of dogs that will get completely along with other travelers’ dogs, but if you get them near somebody else’s dog that lives in a house, they do not like the dog,” said Victor.

At the moment, Victor, Levi and Tab do not have any dogs, but most travelers do. Levi said that if he had a choice, he would want an Australian Cattle Dog. Besides being his favorite breed, he said that they are easy to get onto trains.

“My friend has a big German Shepherd, but it’s not a German Shepherd – some kind of shepherd. And all he says is, ‘Like a gazelle,’ and it will jump onto the train,” said Levi. “But we were about to get on a boxcar, and we were like, ‘Come on Nugget, like a gazelle,’ and it tried to jump, and it didn’t make it, and it just smashed its face right into the face of the fuckin’ boxcar.”

Besides dogs, travelers sometimes own pet cats, rats or other animals. Victor said he even had a pet opossum once. “A cat is shitty, I don’t understand why anybody would want to travel with a cat,” said Levi.

Dogs remain the most popular choice of animal companion for traveler kids, although sometimes they hear concerns from passersby.

“People are always saying, like, ‘Oh that poor animal!’” said Victor. “Like, we feed and walk it all day.”

Living out of a backpack means that every inch of space counts. Even the dogs carry little pouches to help bear the load.

D. J. said that he has learned to travel light and now brings only a sleeping bag, dog and human food, a change of clothes, sewing supplies, a knife and tent-making supplies.

Victor said someone stole all of their group’s possessions while in New York, including their sleeping bags. They just bought new backpacks and share a single blanket between the three of them.

“That’s more of a joke, you know, hobos – beans,” said D. J. “Well, I actually like beans, I like chili, so I usually will bring chili on a train. So I guess there’s some truth to it.”

At times they also received food stamps, according to Victor.

“I used to travel for a long time, and I had a frying pan and a Bunsen burner. So I had food stamps, so when my food stamps loaded, we’d all get wine and act fancy under the bridge in San Diego, and get steaks, and we’d just sit and cook steaks and drink wine under a bridge all day. But then all my food stamps are gone in one day,” said Victor.

Neither Victor nor Levi have attended college yet. Levi is interested in studying film, or at least working in some capacity in the film industry. He loves Wes Anderson films, especially “The Royal Tenenbaums.”

While still in the Boston area, Levi had an idea.

“We should walk in and sit in on some [Harvard] classes. Be like, ‘We’re fuckin’ Harvard fuckin’ smart.’ We probably could,” he said.

“My ex-girlfriend, when she was in UCLA, I would go to her classes and just sit in all the time. And I would be like, ‘Dude, I’m being taught for free. You’re paying hella money; I’m not. I’m just as smart as you, and it costs zero dollars.’ But there’s no piece of paper that says you’re that smart,” said Levi.

D.J. lives in a house in Pennsylvania that was, until recently, a squat – an abandoned building where people live. His friend bought the house from the State of Pennsylvania, discounted through adverse possession laws. Such laws allow a disseisor, the person occupying the unused property, to gain ownership if they demonstrate continuous possession for a number of years. In the case of a residential property, this entails living there every day and repairing the building more than the rightful owners, which his friend did.

C-Squat, a squat in New York, houses several well-known folk punk and crust punk bands, including Leftover Crack and Star Fucking Hipsters. In 2002, New York cracked down on illegal squats, managing to close all but 11. The city allowed these squats to remain open under the supervision of nonprofit organizations, on the condition that they be used to house low-income tenants.

According to Victor, his mother offered to take him back in, but he loves the lifestyle of traveling so much he doesn’t want to go back.

“I like travelling. Like, that’s all I care about,” Levi explained. “I want to see as much as I can see while I’m alive.”