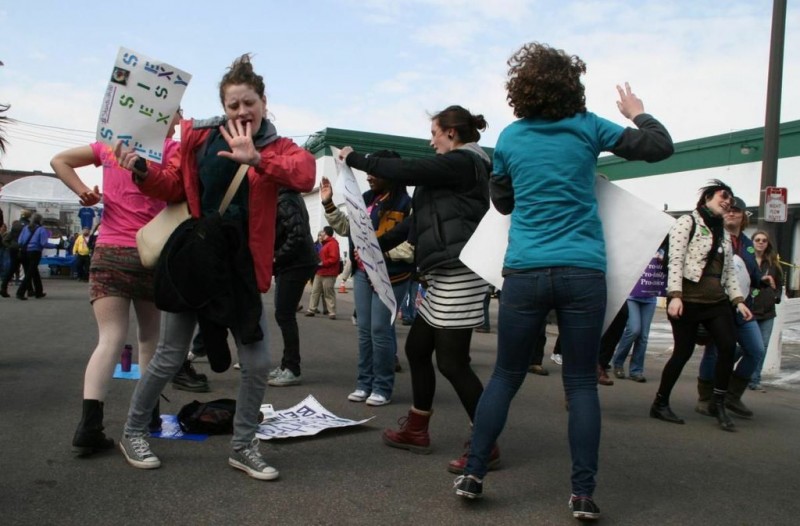 The law prevented protestors from coming within 35 feet of the entrances to Planned Parenthood health centers. Years of patient harassment by anti-choice protesters and the shooting deaths of local Planned Parenthood staffers Shannon Lowney, 25, and Leanne Nichols, 38 inspired the it.

While the new bill does not create a buffer zone, it takes new steps to ensure the safety of visitors to Planned Parenthood and other reproductive-health centers.

“In 2008, I was heading to Planned Parenthood to get birth control pills. I was approached by a man who asked me why I was going into the clinic. When I said that I didn’t intend to answer him, and that it wasn’t his business, he called me a ‘Nazi bitch’ and told me that I should be ashamed of myself,” said Bostonian resident Kate Ziegler. “I was really glad the buffer zone existed. It was a startling … It was traumatic, and [it] made me think of the errand of picking up my birth control every month, and worrying about being followed upon leaving the clinic.” Ms. Ziegler testified earlier this month in support of the Safe Access Act.

In a national press conference, Planned Parenthood of Mass. president Marty Walz described the aftermath of the June 26 court decision. “In Boston on the Saturday after the law was struck down, a large group of protesters yelled at our patients and literally chased some of them down the sidewalk of our health center. One of our patients was so upset by her experience that she left without the medical care she needed. Another patient tried to get out of her car on the passenger side. A protester blocked her. A volunteer escort helped her out and shielded her as she moved into the health center.”

Ordinances impacted by the June 26 decision include some in New Hampshire, Portland, Maine, and Burlington, Vermont. In Burlington, City Council unanimously voted to find “legally defensible alternatives” to the former 35-foot buffer zone.

Mass. Attorney General Martha Coakley, the defendent in McCullen v. Coakley on behalf of the Commonwealth, said, “Women have the constitutional right to reproductive healthcare. We used the court’s own ruling to map our own legislation. We think this will stand constitutional challenge. We’ve been disappointed in the court’s ruling. We’re proud in Massachusetts that the court didn’t have the final word. We’re happy to work with Planned Parenthood and any cities that may need our help in ensuring women’s safe access to reproductive health.”

One difference between the buffer zone law and the new legislation is the inclusion of withdrawal orders that allow law enforcement to order individuals or groups away from a facility entrance or driveway. Under the new law, a person who does not remain 25 feet from a Planned Parenthood will receive a written order. The law also prohibits the use of threats or intimidation as patients access or depart the facility. If a patient is harassed, he or she can then seek injunctive relief, damages and attorney fees from the harasser.

“Women shouldn’t have to run a gantlet of screaming, terrorizing and bullying in order to get legal health care services, and this new law will help ensure that they don’t,” said Cecile Richards, President of the Planned Parenthood Federation of America. “Last month’s Supreme Court ruling put women at risk. Barely a month later, Massachusetts is righting the wrong that the Supreme Court’s dangerous and misguided decision created.”