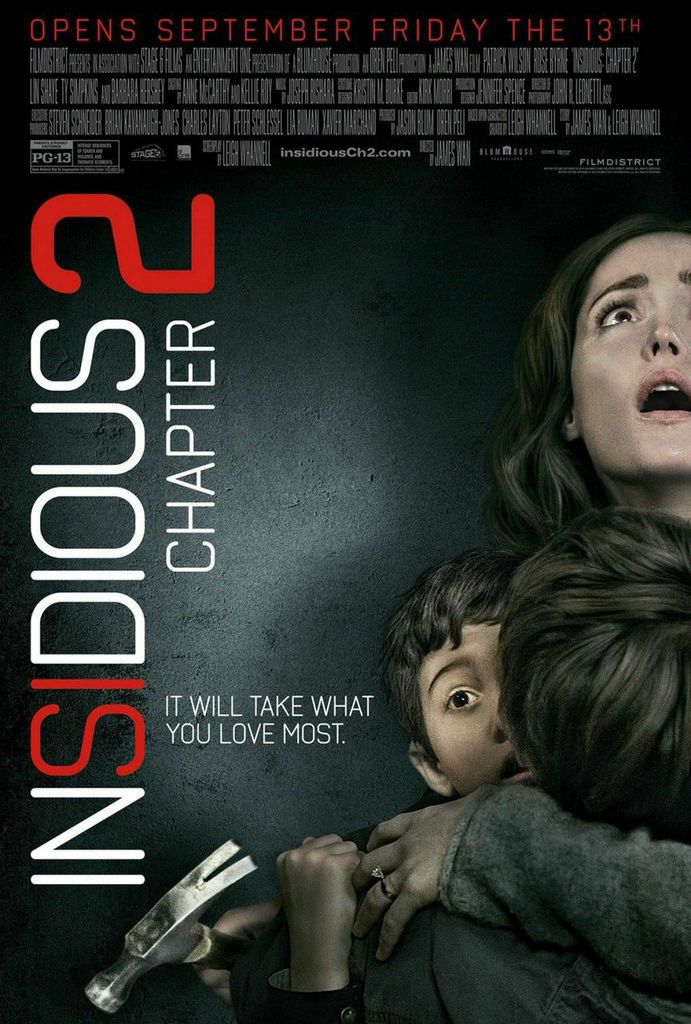 Yeah, you read that right. 2.5 out of 4. I was so disappointed. The first Insidious movie came out in 2011, and when I saw it, I was terrified out of my wits. We were introduced to the Lambert family: husband Josh,wife Renée, and their son Dalton. Things start out pretty normal, as they do in most movies, but before long things start to go “bump in the night…” Quite literally. Josh and Renée call upon a priest to rid their house of the evil poltergeist that haunts it, only to find out it’s Dalton himself – their boy! – who is possessed, not the house. Despite some snags, collateral damage and a few unfortunate deaths, the Lamberts manage to save Dalton, as well as themselves, and are able to get out of the house and away from the evil spirits for good… or so they think!

Insidious: Chapter Two picks up exactly where the first one left off. Josh, Renee, and young Dalton have moved into a relative’s home after narrowly escaping their own. Unfortunately, they have yet to escape the evil spirit. Remember, it wasn’t the house that was possessed; it was Dalton. And now, because Josh managed to save his son, it is Josh who plays host to our poltergeist.

But that’s the only thing that changes in Chapter Two. The scares aren’t any more or any less scary; the ghosts aren’t any more or any less creepy. It was as if the director couldn’t really come up with his own vision to go along with the screenplay, so he took bits and pieces of other directors’ pieces of work. One minute I felt like I was watching Poltergeist III, then the (awful) remake of The Amityville Horror, and then the forgettable Stir of Echoes. There was no originality to Chapter Two, just a lot of frenzied mimicking. True, the performances by Patrick Wilson as Josh and Rose Byrne as Renée were very accomplished – not to mention an absolutely stellar turn by Ty Simpkins as Dalton – but the acting wasn’t enough to keep me on the edge of my seat. At best the performances were just enough to keep my eyes open.

The first chapter of Insidious should have been the only chapter. My hope, as a reviewer and a cinema goer, is that the book is now closed.