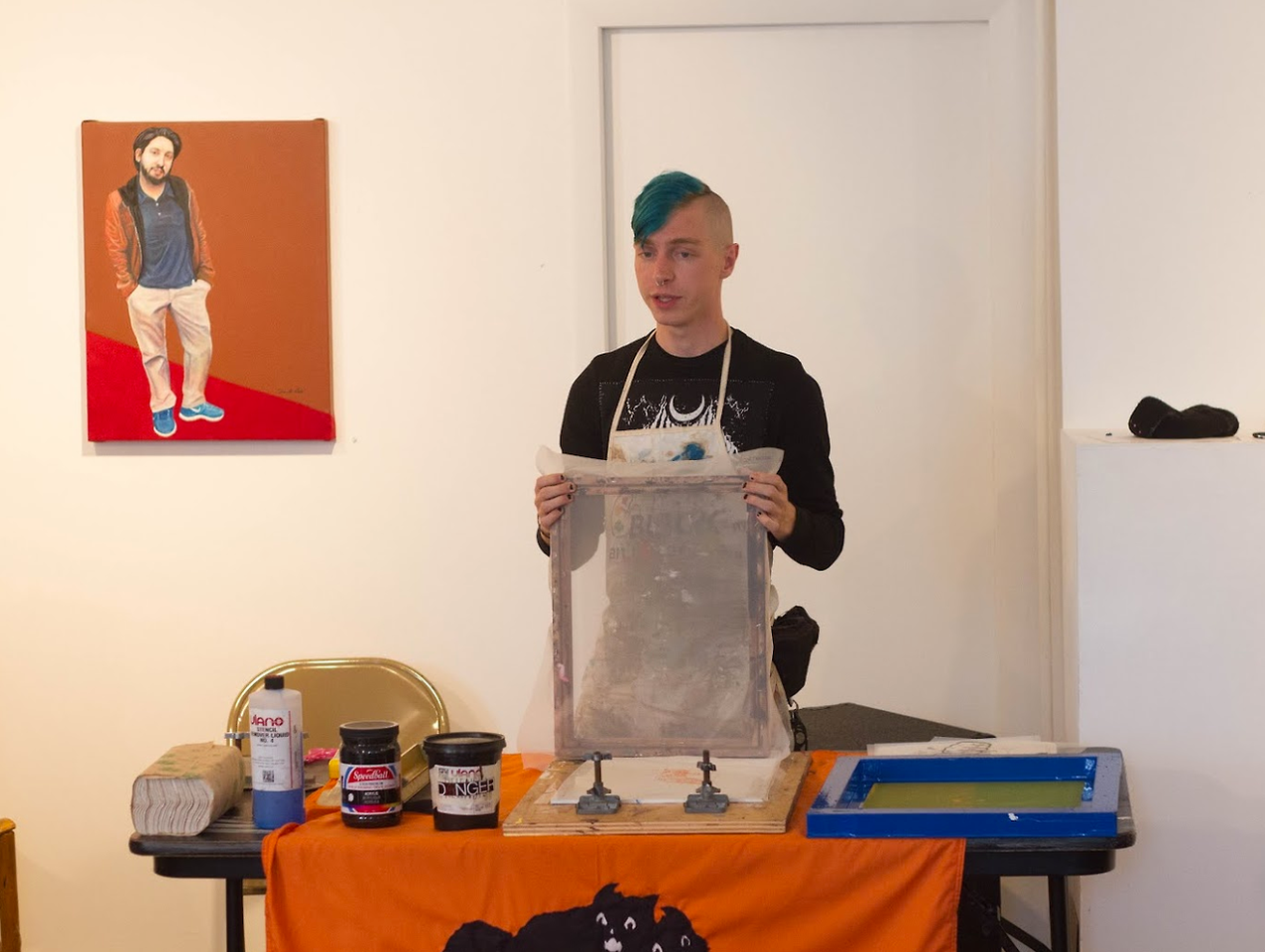 On Saturday, Oct. 11 and Sunday, Oct. 12 in the Washington Street Art Center and Aeronaut Brewing Company, the Boston Zine Fest took over a little slice of Somerville. The Zine Fest kicked off its first annual event this year with discussion panels, printmaking workshops and a day-long tabling event. Boston’s zine artists were joined by artists from all over the Northeast region to share, trade and sell their work.

The event was organized by the Boston Zine Fest collective (BZF). Zines are self-published magazines, usually very short, and entirely hand-made. They can include collages, comics, poems, illustrations and photographs, all of which are put together, written and/or drawn by the artist themselves. Brittany Mitchell, a member of BZF, says that Boston’s “zine-scene” consists mainly of comic-zines and autobiographical zines, which were found in spades at the festival. Ms. Mitchell also says there were quite a few “art zines, political zines, zines about herbalism, zines about DIY culture, how-to zines, zines about mental health and travel zines. We even [had] zines about cat puke. If you can think it up, there’s a zine on it!”

The Boston Zine Fest is orchestrated under a strict Safer Spaces Policy implemented by BZF; a set of guidelines that includes rules such as: “Respect the opinions, beliefs, and points of view of others, even if they differ from your own”, “Respect the physical and emotional boundaries of others. Always get explicit verbal consent before touching someone or crossing other personal boundaries,” and “The Boston Zine Fest absolutely does not tolerate…[r]acism, sexism, classism, ableism, homophobia, transphobia, and all other forms of discrimination.” Safer Space policies are sometimes used at gatherings with punk roots and political intentions similar to the Boston Zine Fest, but they are not explicitly named as such at larger festivals, if they are implemented at all.

BZF does not think the policy should be specific to the zine fest. Ms. Mitchell explains, “We’re just playing our part in contributing to what should be a standard for events: that everyone should feel comfortable being themselves in a space.” This policy extends to the physical space of the fest itself; the event is wheelchair accessible, for all ages and brightly lit. Snacks are provided to accommodate all dietary needs, “with options for folks who are gluten intolerant, vegan, or diabetic.” The bathrooms are gender-neutral too.

According to Ms. Mitchell, this is the first time in six years a zine event this large has happened in Boston. The organizers had been careful to construct the event so that it would “encourage critical thought about zines as a medium and the way this interplays with self reflection [and] self expression.” The panels were designed to get people thinking about “the place of zines as a medium in social movements,” including how zines empower particular demographics, how people use zines to express their identities and how zine-making is a political act.

These conversations are important to continue in the zine community, especially since, as Ms. Mitchell says, “the creation of a zine is a really personal act, people put so much of themselves into their zines, and many people find it easier to express things in zines that they wouldn’t in other arenas [or] mediums.” Even if a zine itself is not very political, the artist who made it is likely conscious of both themselves and the context in which they made it.

This can be at times true, and at others untrue for Boston zine artist Louis Roe, who makes zines under the nickname “Squishy Sandwich.” Mr. Roe made his first zine this year, and he is a part-time professional illustrator. Mr. Roe says that his zines, which are made up mostly of “doodles,” are a way for him to deal with his own responsibilities and emotions. Mr. Roe is also drawn to the personalized experience of an artist sharing a zine with a reader. Having just graduated from Emerson College, Mr. Roe is eager to distance himself from the big business of publishing. “I hate ‘big publishing’ because there’s so many people involved that it doesn’t become the artist’s original work any more,” he says. “It broadens the gap between artists and their original intent… I love seeing things that I know are hand-delivered from the artist to the reader without any garbage process in the middle.”

Mr. Roe commented on BZF’s Safer Space policy, saying, “I think every fest should implement it. I’ve become a lot more sensitive since becoming part of this community, and I think that’s a good thing. In a world of art, where art is used as therapy, it’s very easy to not care about other people in what you’re trying to do. Even something as simple as gender-neutral bathrooms, for someone who’s in between the gender binary, means a world of difference.”