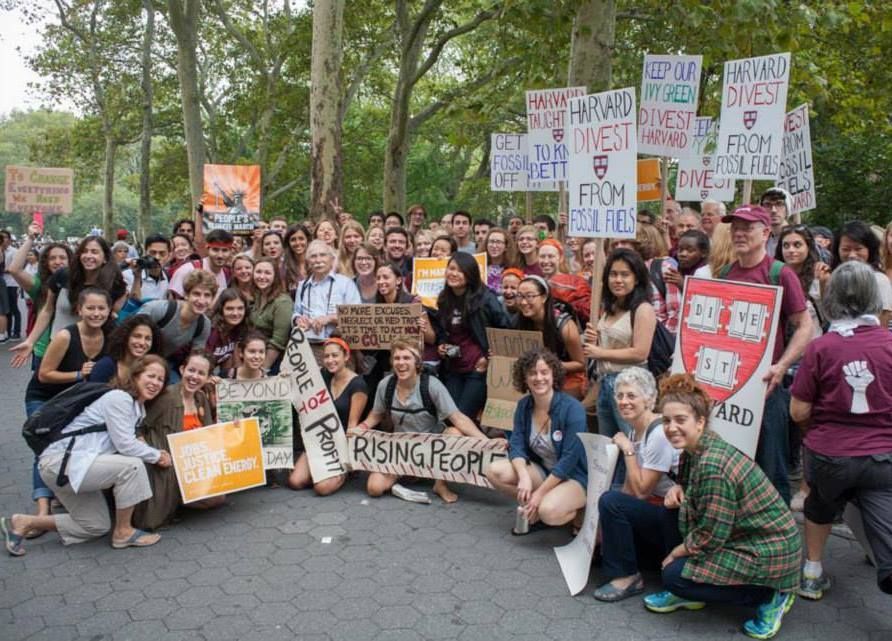 Harvard students spent the last week hungry. From Oct. 20-24, a group called Divest Harvard sponsored a fast aimed at persuading the school to sell off its shares in fossil fuel companies.

According to Sidni Frederick, a Harvard sophomore and one of the fast’s co-coordinators, over two hundred students participated. Many others supported the effort with phone calls and emails to the administration.

“So many people over the course of the week were very inspired,” Frederick said.

Their last demonstration — a “blockade,” in Frederick’s words, of the University president Drew Faust’s office in Massachusetts Hall — lasted two days and resulted in one student arrest.

“People felt like the action was aggressive,” she said. “We were very concerned that members of the student body felt alienated.”

The fast was meant to be “a more spiritual tactic,” as Frederick put it, aimed at building the community of supporters. Students could sign up to fast for anywhere from one to three days. Some did more, although that was not officially encouraged; the group did not want to risk their participants’ wellbeing.

“Luckily, people listened to their bodies,” said Frederick. “We didn’t have any health issues during this week.”

The group targets the two hundred publicly traded companies identified by Go Fossil Free as having the largest reserves of oil, coal and natural gas. According to Divest Harvard’s website, the University’s endowment has $11.8 million directly invested in these companies, and a total of $34.6 million when indirect investments are included.

“It is inconsistent for Harvard to fight climate change with one hand and sponsor it with the other,” says one Divest Harvard pamphlet. The organization is asking the University to ban new investments in fossil-fuel companies, sell off its direct holdings immediately and reinvest its indirect holdings within five years.

Divest Harvard is one of a slew of divestment initiatives founded in 2012, after Rolling Stone published “Global Warming’s Terrifying New Math,” a call to arms by well-known environmental author and 350.org founder Bill McKibben. These groups share the goal of keeping global temperatures from rising more than two degrees Celsius, which, they say, requires 80% of known fossil fuel reserves to remain underground.

“[These companies] don’t have any interest in acknowledging the need for their assets to be stranded,” says Frederick, adding that “governments aren’t listening to the people because the fossil fuel industry is in their ear.”

When Stanford divested from coal production earlier this year, two of the University’s graduate students challenged the rationale in the Stanford Daily. “[T]he cause of our climate problems is the emissions, not the fossil fuels,” they wrote. “The actions we should take, in order of effectiveness, are as follows: Divest from emissions, divest from burning the fuel and lastly, divest from producing the fuel.”

The authors were Karim Farhat, then as now a PhD candidate studying energy policy, and Scott McNally, who has since graduated with a master’s in energy resources engineering and is enrolled at Harvard’s Kennedy School.

“I think it’s kind of silly that we’re focusing on the production side,” said McNally.

“My goal is not to kill fossil fuels. My goal is to produce clean energy,” he said. “In my opinion, options are good.”

Meanwhile, Harvard has set a $20-million fundraising goal for its Climate Change Solutions fund, and a 30% net emissions reduction target for 2016. So far, according to a University statement, they have achieved a 21% reduction, including the carbon footprint of new and renovated University infrastructure. The Harvard Management Company has even hired a Vice President of Sustainable Investing.

Frederick says the reason to pursue endowment divestment, as opposed to an expansion of University research or a reduction in campus energy consumption, is that the school “is already doing that, to some extent,” while divestment is not being seriously considered.

”Harvard University is doing everything but thinking about the political side of climate change,” she said.

Proponents and skeptics of divestment can easily talk past each other. While the skeptics argue for a diversified pool of technological and economic solutions, divestment activists are pushing for cultural change — they do not pretend that divestment is anything more than a political cudgel.

“Our goal is to stigmatize the fossil-fuel industry,” says Frederick. She invokes previous divestment campaigns aimed at tobacco and apartheid-era South Africa, which made it “unacceptable” to own stakes in those great social evils.

At the same time, some feel this approach to fighting climate change might have unintended negative consequences — including stifling legitimate research on alternative energy sources, much of it funded by the very fossil-fuel companies that divestment targets. Others hold out hope for technologies like CCS that they hope will one day allow for energy production using fossil fuels without negative impacts on the climate.

“By declaring coal a bad fuel not worthy of investment, what message are we communicating to the world?” ask McNally and Farhat in their article. “To scholars, are we declaring CCS research dead?”

Despire these criticisms, Divest Harvard isn’t going away anytime soon. Frederick believes the fast has increased their support on campus. “We got a lot of solidarity.”