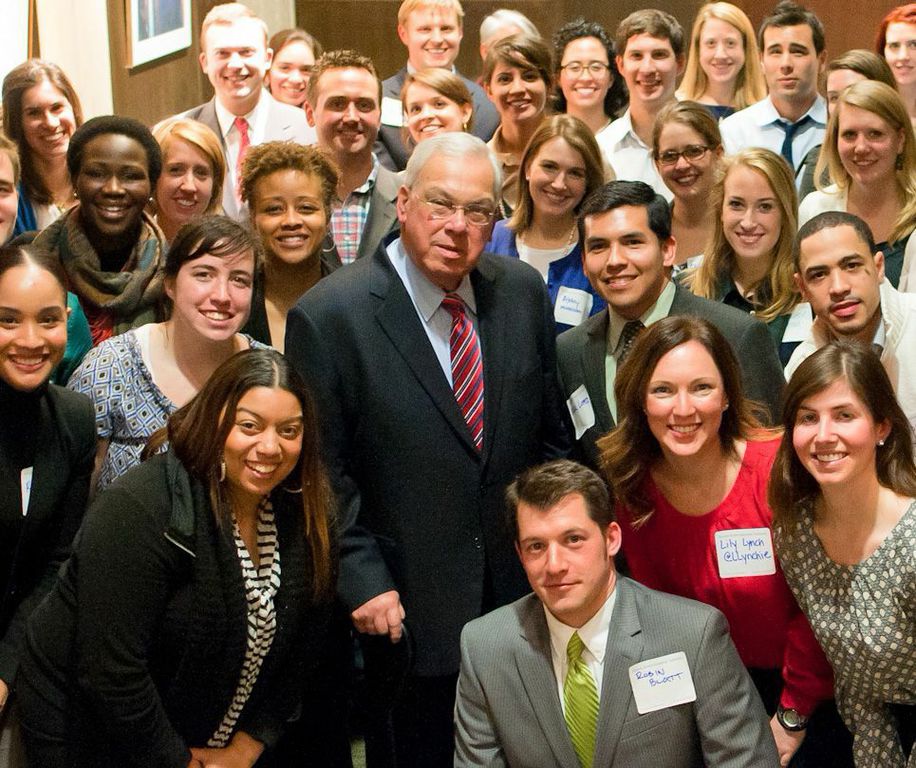 The late Mayor Tom Menino’s impact on the city of Boston was easy to see after his death on the morning of Oct. 30. Thousands visited his casket in Fanuiel Hall on Saturday, Nov. 2, and thousands more lined the route of his funeral procession the next day. As the oft-repeated statistic claims, more than half the City had met the late mayor at some point. So it was only fitting that the City turn out for his final ride through town. He was more than just a popular mayor — for five terms, Menino was a very involved, hands-on leader who played a role in most of Boston’s social justice concerns. His impact on social justice runs the gambit from helping out schools as “the urban mechanic” to simply being a consistent, vocal advocate. Here’s a look at Menino’s impact on some of our city’s most important social issues.

“I’d be hard-pressed to think of anyone more supportive and genuinely concerned for the homeless than Tom Menino,” sais Joe Finn, president and executive director of the Massachusetts Housing and Shelter Alliance. “The amount of housing he generated among the poorest and disabled people — I’m surprised more people aren’t talking about it.”

“The thing that I admired most about Tom Menino is that it was personal, not political,” said Finn. “He was genuinely concerned about people.”

Some have argued that the recent closure of the Long Island Bridge was a problem Menino could have prevented, but Finn doubts it will blemish his legacy. After all, “there are a lot of characters involved” in the saga of the 63-year-old Long Island bridge — characters in Quincy, characters who pre-dated the Menino administration and even a few characters who came after. While the repairs to the bridge under Menino’s tenure were band aids, they were band aids he fought hard for as he consistently butted heads with Quincy officials to approve repairs.

The former Mayor has been consistently praised for his support of the LGBTQ community. He was an early proponent of marriage equality and a consistent voice for inclusion.

“The list of examples of Mayor Menino’s visionary leadership is long. As a city councilor in the late 1980s, he worked to support HIV education and prevention efforts, and he instituted the first needle exchange program in the State,” K. C. Coredini, executive director of MassEquality, said in a statement. “As mayor, he fought for — and won — a municipal ordinance prohibiting discrimination on the basis of gender identity. He refused to walk in the St. Patrick’s Day Parade because the LGBTQ community wasn’t welcome. He wrote to the anti-marriage equality president of Chick-fil-A, who was considering opening a restaurant in Boston, to tell him that discrimination was not welcome on Boston’s ‘Freedom Trail.’ One of the earliest supporters of marriage equality, he lobbied the State House in support of the freedom to marry. And on 17 May 2004, the first day that same-sex couples could marry in Massachusetts, Mayor Menino personally welcomed couples at Boston City Hall and made sure they were shielded from protesters.”

Menino was also a visible presence at Boston Alliance of Gay, Lesbian, Bisexual and Transgender Youth (BAGLY) events and hosted the BAGLY prom at City Hall in 1996.

“It showed that the mayor and the City institution is supportive of the LGBTQ youth,” said executive director Grace Sterling Stowe. “It was important for our visibility.” The prom has been held at City Hall since then, and in 2008 BAGLY honored Menino with the Michael Pumphret Distinguished Leadership Award for his constant support.

Menino’s most significant contribution to Boston’s public health was also one of his riskiest undertakings: The Boston Medical Center. To establish it, he had to merge two hospitals — Boston Medical Hospital, which served the city’s poor, and Boston University Medical Center Hospital, a teaching hospital — and faced intense union opposition in doing so. He did not receive strong support from the City Council, either. As an article in CommonHealth noted, “half of the patients it serves are low-income patients, three times more than any other hospital in the city.” The Boston Medical Center named the Menino Pavillion after the former Mayor in honor of his efforts. Hospital president and CEO Kate Walsh called the pavilion the “heart” of the Center.

In a statement, 1199SEIU United Healthcare Workers East also praised Menino as an advocate for health care workers, noting his support for the 1199SEIU Training Fund and recounting how after the “2009 earthquake in Haiti, Mayor Menino established an earthquake response headquarters at our union hall in Dorchester to aid thousands of Boston healthcare workers whose families and friends lost their lives in the tragedy.”

Menino wanted to be remembered as “the public health mayor,” and Corby Kummer of The Atlantic writes that part of that title ties into his policies on food. “Menino cared about food for exactly the reasons today’s food movement activists do, and long before it was fashionable to embrace what food can and should mean: access to fresh produce for everyone of every income level; gardens as ways to unite and repair communities; and, most importantly, fresh food as a route to better health,” Kummer writes in “The Mayor of Food.” The article notes that Menino helped attract 25 supermarkets to low-income neighborhoods , “championed the creation of a 2.5-acre organic garden… on the grounds of the city’s largest homeless shelter; actively supported fundraising for Boston’s first year-round indoor food market, which is finally breaking ground… and, significantly, created a full-time position four years ago for a director of his Office of Food Initiatives.” (Kummer does note that Menino’s food activism fell short when he allowed a Whole Foods to replace a failing Latino supermarket.)

He also banned soda from city property in 2011, and Marion Nestle of the Food Politics blog notes Menino was proud that he reduced soda consumption among Boston Public School students.

Menino has been called the “Education Mayor,” a nickname well earned due to an increase in test scores and decline in dropouts during his 20 year run. He took very hands-on approaches in many cases, like Gavin Middle School, which he helped transition into UP Academy Boston. However, Menino knew there was still work to be done in the schools—particularly, a large academic achievement gap between white students and non-white students (even at UP Academy, where two-thirds of students failed to meet proficiency standards in 2014).

Additionally, he softened his stance on charter schools towards the end of his tenure — a decision lauded by charter supporters, but not by the teacher’s union and those who distrust charter schools’ corporate influence.

As Boston Magazine notes in “One Boston? … And Justice for All,” Menino focused on underserved communities of color by providing more city services like community centers, pools, libraries, and parks, which translated into him winning 70 percent of the vote in most neighborhoods of color.

Taking over in the wake of some of Boston’s most troubled racial tension, this straightforward approach helped the city and Menino’s popularity.

That said, saying he “healed” a divided city may be overreaching. In terms of City Hall hires, the Blackstonian found people of color were woefully underrepresented, making up only 22 percent of city department heads. Developments in Roxbury and an increasingly shrinking Chinatown, say local residents, introduced the threat of gentrification to these communities — a threat they still face today. And for all the money invested in Dudley Square’s Ferdinand Building, the surrounding neighborhood rarely saw as much investment. “He developed everything around us,” said one Dudley resident in a WBUR’s segment “Dudley Square Residents Seek Fairness With Change,” reflecting the unequal growth among Boston’s communities.

In that same piece, however, David Price, director of Roxbury’s Nuestra Comunidad Development Corporation, credited the mayor with renovating the neighborhood, attracting businesses, and improving safety.

He was also a supporter of Boston University’s BioLab, putting him at odds with Roxbury residents who didn’t want an infectious disease laboratory located so close to home.

One of Menino’s lasting legacies will be the Mayor’s Office of New Bostonians, a valuable resource to Boston’s growing immigrant communities (particularly Latinos and Asians), which was established in 1998. Some notable services include 2001’s English for New Bostonians (ENB) project, a city-private-community partnership which funds English for Speakers of Other Languages (ESOL) programs in the community, and enables 1,000 additional students to attend classes annually; annual immigration consultation which helps new Bostonians mitigate scams through bi-weekly immigration clinics staffed by competent pro-bono attorneys; and translation and outreach efforts for 20 different departments.

Immigrant students still suffer a notable achievement gap, though 2002’s statewide cuts to bilingual education certainly deserve to be mentioned as a factor.

In 1994 Menino established the Youth Council for young Bostonians to advocate for youth issues and to act as a bridge between city hall and the community. The Council also attended annual conferences in Washington D.C., where they advocated for youth issues and lobbied for federal grants.

He also supported the growth of various non-profits in the city, with groups like Camp Harborview and Playworks springing up around Boston. “Mayor Menino created a whole ecosystem in Boston where non-profits were really important parts of the solution in improving the outcome for kids,” Playworks executive director Max Fripp told NECN.

Menino is one of the founding members of the US Mayors’ Alliance for Green Schools, and during his tenure Boston was the first major US city to incorporate green building standards into its zoning codes, requiring all private construction over 50,000 square feet to follow the US Green Building Council’s LEED standards. He also established the Mayor’s Green Awards to recognize environmentally friendly businesses in Boston.

“Mayor Menino was a true champion of the environment, the parks, historic preservation, and smart, forward-looking development of our City,” said Brian Sweat, Boston’s chief of environment and energy, in a statement released by Greenovate Boston. “While Mayor Menino himself did not consider himself a visionary, he recognized that the role of City leadership is not just to think about the next year, but also the next decade and the next generation, and he put Boston on a path to being a vibrant, dynamic, and sustainable city for generations to come.”