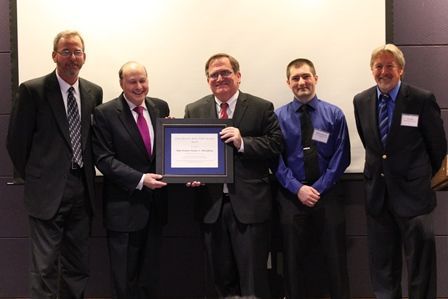 BOSTON, Mass.—State Senate Majority Leader, Stanley C. Rosenberg, and the Interim Clinical Coordinator at Bridge Over Troubled Waters, Richard Brunson, were honored for their outstanding contributions to reducing homelessness in Massachusetts at the Massachusetts Housing and Shelter Alliance (MHSA) annual meeting this year.

“This year’s Canon Brian S. Kelley Public Servant Award is particularly a special one,” said Joe Finn, the Executive Director and President of MHSA. “When we struggle to decide to whom to offer this public servant award to, often times, there are nice coincidences. But we never give it to anyone who we don’t feel truly deserves it.”

Brian Kelley is the Cannon of the St. Paul Episcopal Church. When homelessness emerged in the 80s, Kelly began to address homeless issues at the front door of their churches. He also led social actions and ministries, which is now Social Actions Massachusetts (SAM), a program of MHSA.

“[Kelly] was greatly involved in the Greater Boston Adult Shelter Alliance. And [SAM] is really the founding core of what has today become MHSA,” Finn said. “He spoke truth to the power. He was a loving, kind and charitable person, but also the one with a kin sense of justice.”

“It sounds like the gentleman for whom it’s named is quite a remarkable person, and I hope I can do half as much in my work in life time as he clearly did in his work many years,” Rosenberg said.

Rosenberg also thanked the collaborative effort to reduce homelessness by his colleagues in the senate and the House. He then cited a story about his recent visit to Pine Street Inn.

“On Thanksgiving morning, I went over to Pine Street Inn with the Boston Mayor Walsh. And we cut turkeys and served lunches. I’ve done that of course many times in my own district in various programs. But it was particularly a compelling morning, because here I was is what the largest homeless shelter I’ve ever been in – 350 beds in that building alone,” Rosenberg said. “When I walked in where the guests sleep, I was just struck by the diversity of people in that room, and then we started conversations and talked to those folks briefly about how they ended up there. It was extremely compelling and heart wrenching. Lots of people there by virtue the fact that they lost their jobs. They were college educated, working a good job, but the company went out of business. They were a little too old to be seen by other employers. And they ended up downward spiral of losing their home, losing their family, losing their self-esteem, losing hope, becoming depressed and turning to alcohol and drugs, and eventually found themselves on the street, and in a homeless shelter.”

Rosenberg also pointed out the Reagan administration “planted two really poisonous seeds” in our society, which led to really significant downward spiral. “They reduced federal funding for housing in this country by 90 percent, and Reagan also convinced the public that ‘we could have more with less if we get rid of the fraud ways and abuse’,” Rosenberg said.

Rosenberg challenged everyone in the audience to work with the new governor and the legislature to create a vision for how we end homelessness.

At the meeting, Richard Brunson received the Ed O’Neil Award for his commitment to serving homeless individuals in Massachusetts.

Brunson particularly thanked for the homeless kids that he’d been working with for the past 33 years. “They have allowed to me to come into their lives. They trust me to help them move forward,” he said.

Ed O’Neil was a Quincy native and long-time supporter of homeless individuals. He passed away in 2012. Ed O’Neil Award is for a distinguished direct care worker based at one of the MHSA’s member agencies who has demonstrated a strong commitment to ending homeless through his or her work, according to a MHSA annual meeting’s handout.

Ed O’Neil’s family, including her wife Rosalie O’Neil also showed up at the meeting.

“I know he would be very honored right now… He full circled everything to help everybody. He left the rest of work for us to do, so we’d better to get it done,” Rosalie O’Neil said, smiling. She said it was her privilege to meet everybody at the meeting who worked so hard to end homelessness.

According to a recent report by US Department of Housing and Urban Development, Massachusetts has 290 homeless per 100,000 people in 2013, making the state ranks the ninth highest rate of homeless in the country. And the homeless population in Massachusetts increased faster than in any other state in the nation.

In respond to the report, Paul Sullivan, once homeless and currently one of the board members of MHSA said that he heard many homeless people from different regions of the country moved to Massachusetts for better temporary housing.

“There are more advocates in the Commonwealth of Massachusetts to help the homeless,” Sullivan said.

MHSA is a non-profit public policy advocacy organization with the mission of ending homelessness in the Commonwealth, and it represents 100 community-based agencies statewide.