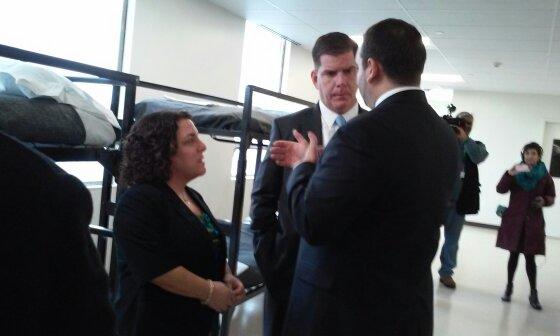 The new shelter on Southampton Street in Boston’s South End, built over a two-and-a-half-week period, is located less than a five minute walk from the Woods-Mullen Shelter and the Barbara McInnis House. City leaders came together to prepare the transportation sign building located at 112 Southampton St.

The new shelter will house 100 homeless men. Yep, no women. In the spring, they will get an additional 300 to 400 beds to help provide for the many homeless people who were displaced from Long Island.

But what about the homeless women currently cramped in a small, one-floor space at Woods-Mullen?

Of course, many people are wondering what is being done for the homeless people who are recovering from drug and alcohol addiction and who were in the detox programs at Long Island shelter. “We are still committed to helping them,” Brown explains. “Nothing has changed except that now we are training our staff to help meet all of the guests’ needs and we will be incorporating the people who were in those programs into the new shelters. They will continue getting help with addiction services and housing services just like they were before.”

I ask Brown whether the staff at the Southampton Street facility and the Woods-Mullen shelter are capable of identifying who needs addiction services. “We have the paperwork for the programs that were out at Long Island shelter,” she continues. “It took us a while to get things from there, but we have all the information which was out there. We are once again prepared to help anyone who was in the addiction service programs out at Long Island shelter.”

Arroyo spoke of how we need to be committed to poor and low-income citizens and help them work toward safe, permanent housing. He pointed out that it’s a sad day when you lose your home and stability and wind up in a shelter, but it’s Massachusetts’s job to provide a hand up when people are down.

Then we were introduced to Mayor Marty Walsh. He shared two great quotes: “We are in this together, every man, woman and child. For our seniors and our students, for rich and poor and everyone in between.” The quote was written on the wall inside the Southampton Street shelter with a picture of the Leonard Zakim Bridge in the background.

Mayor Walsh continued: “We are all in this together, the legislature, the representatives, the homeless task force. This is about how we work together.”

After the press event, Mayor Walsh gave us a tour of the new facility. The shelter has a small game area, five toilets, eight showers, 100 beds (50 bunks) and a small kitchen, which is still a work in progress. The mayor pointed out that in the back of the shelter they will add some grass, trees and benches for people to enjoy. We then talked among ourselves and that’s how I met Senator Linda Dorcena Forry, John Rosenthal and several other people. They very helpfully told me what to expect in terms of the new shelter and the changes planned in the near future.