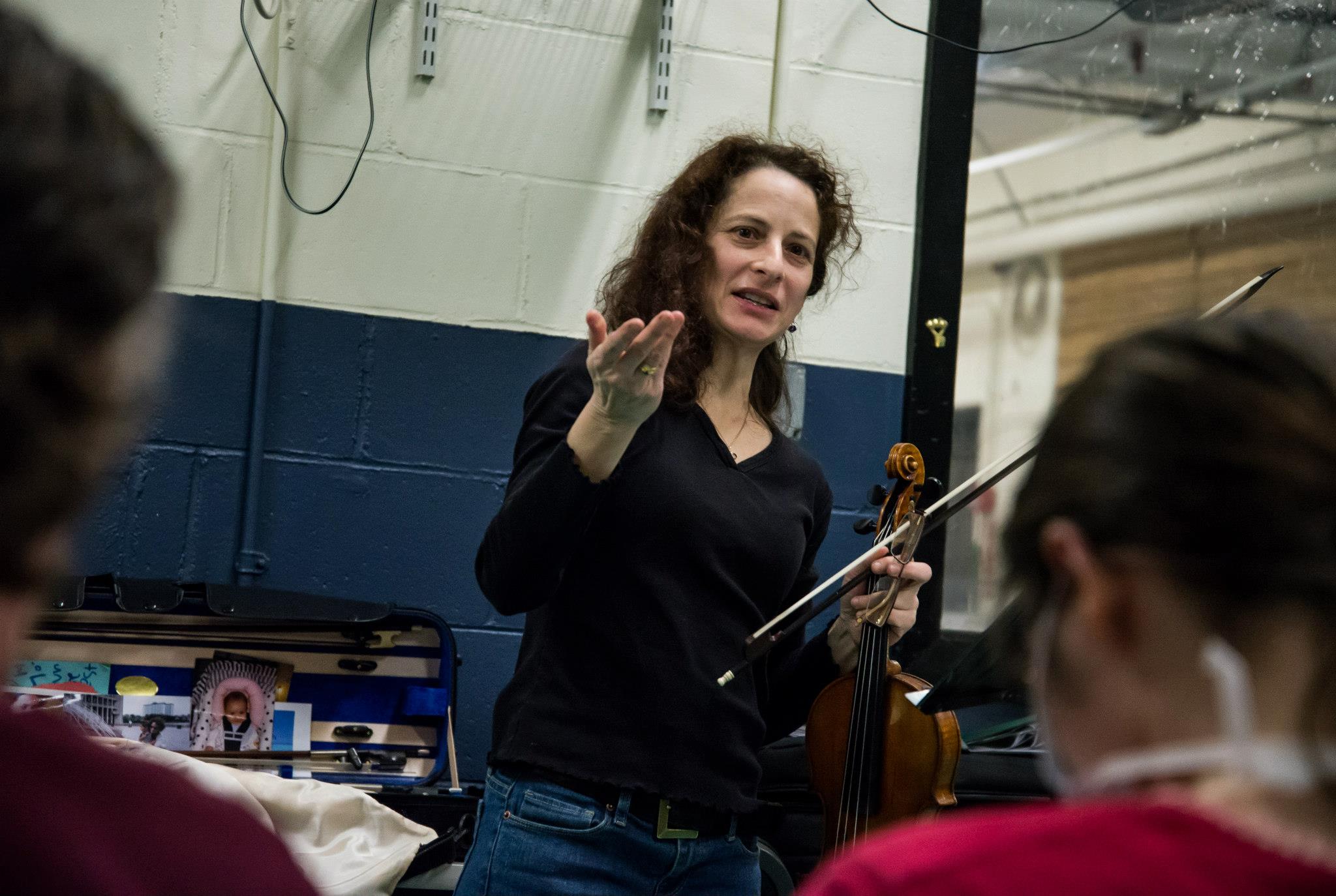 Julie Leven, classical violinist who holds degrees in English and Music from Oberlin College and Conservatory, has always felt an impulse to help the less fortunate and was influenced by her alma mater’s legacy of promoting social justice.

These two passions came together for her in 2010 when she founded Shelter Music Boston, a non-profit organization for which she serves as executive and artistic director. Shelter Music Boston’s mission is to perform live classical chamber music for displaced shelter residents, those who might not otherwise have the financial means or opportunity to experience music in less-accessible venues. It’s Leven’s hope that this will create an environment of dignity and respect for residents.

Leven, a member of the Handel and Haydn Society who has toured with the Boston Pops Esplanade Orchestra, was inspired by a newspaper article about a violinist who plays in homeless shelters in New York City. After recruiting other classical musicians who were also interested in her vision, Shelter Music Boston was born.

Five years later, the ensemble is a thriving non-profit organization whose concerts have a lasting and meaningful impact on both the musicians and shelter residents alike. Currently, Shelter Music Boston is comprised of six core musicians and three guest artists. They perform monthly concerts lasting approximately 60 to 90 minutes at six partner shelters: the Pine Street Women’s and Men’s Inns, the Pine Street Inn Shattuck Shelter, the Community Day Center in Waltham, the Dimock Center and CASPAR Emergency Service Center. A seventh shelter is in the works.

Her hope is to expand to even more shelters, but the logistics and planning of such an endeavor can be challenging. The ensemble’s vision is to make classical music more accessible to the homeless and to bring a sense of peace, joy and relief to people living in harsh, crowded and often chaotic circumstances.

Shelter Music Boston emphasizes the educational and interactive approach of its concerts, which feature Q&A sessions with the musicians, introductions to and backgrounds on the composers they’ve selected to play, explanations about the instruments themselves and feedback and comments from the audiences after the performances. Leven and the other musicians encourage audience interaction and dialogue, which distinguishes their concerts from those they perform in more traditional venues.

Depending on the particular shelter they’re playing at, the number of people in attendance varies. There are regulars, she notes, who enjoy seeing the core members of the ensemble return on a regular basis. She also emphasizes how important this work is to her and her fellow musicians. They regard it as equally important and valuable as any of the performances they are paid to do, and they plan and rehearse diligently in preparation.

Playing for shelter residents is particularly meaningful for the Shelter Music Boston ensemble. The experience of performing for people whose lives have been disrupted or uprooted for various reasons is a powerful one. Leven believes that people living in shelters are just as deserving of the opportunity to enjoy an evening of classical music as anyone who happens to have the disposable income to purchase a ticket.

The audiences at the shelters have been extremely appreciative of and, sometimes, moved by the concerts. People have remarked that, after a concert, they have been able to enjoy a long-deserved good night’s sleep. Others have asked the ensemble to play certain pieces of music again and Leven notes that Beethoven’s works have been a favorite of audiences. Leven regards Shelter Music Boston’s concerts as a sort of  therapy or service that complements  the professional work the shelters’ staff provide. Music, she notes, can be healing and transformative and is a vital and profound form of communication—an expression of our essential humanity.

At the Dimock  Center, the ensemble performs for two female residential substance abuse programs and concert attendance is mandatory for the residents. One guest told Leven that the concerts inspired her to start listening to classical music as a way to relax and cope with stress. A staff member at another shelter told Leven that a resident was newly motivated to set goals for himself in terms of finding permanent housing.

While not all residents will remain seated for the entire performance or watch it attentively, they’re often clearly aware of the music and continue to listen to it throughout the shelter. Given the non-traditional setting, the musicians often play in large, communal spaces and anyone passing through can listen and feel the impact of the music, which often competes with the bustle and noise of shelter life. Shelter staff have noted that, following a performance, a positive shift in the environment and in the mood of many residents often occurs.

Shelter Music Boston believes that classical music should be accessible to everyone and they are aware of the divide between the traditional audience for classical music and the homeless shelter attendees. They have found that the music resonates, however, by creating an interactive concert experience where dialogue between the audience and musicians is encouraged. Some shelter residents have requested to hear more pieces by particular composers and have related these pieces to their own thoughts and feelings. Leven recalls that one resident was surprised to learn that Beethoven was deaf when he composed a piece he had just heard, and he was able to relate to that genius’ personal struggle and Leven and the other musicians strive to create an environment in which the musicians and audiences connect in a way that is transformative.

As Leven says, “It’s a privilege for us to play for shelter residents and bring a sense of relief and peace to them.”

For more information on Shelter Music Boston and to get a listing of upcoming performances, visit sheltermusicboston.org.