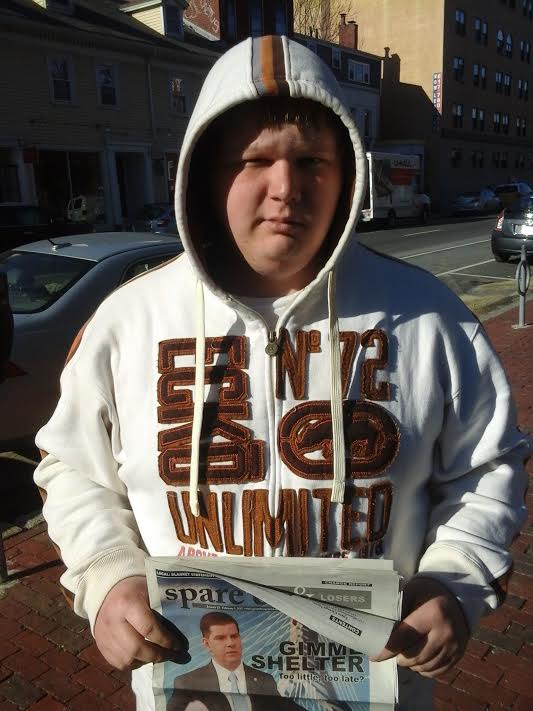 If you’ve ever passed through Harvard Square on a national holiday, you may have noticed a Spare Change News vendor in his early 20s carrying a holiday-inspired, cardboard sign. That’s Jon Denning.

When we posted a picture of Denning with his last sign on the Spare Change News Facebook page—a message inspired by Martin Luther King Jr. Day that read, “The homeless has a dream, too!”—the picture went viral, earning thousands of views.

“I like to make up something funny or sarcastic or sad,” he says

This Christmas, Denning substituted a Santa hat for his traditional cardboard sign and brought festive cheer to our historic square. So keep your eyes peeled for Denning in front of Qdoba in Harvard Square this Presidents’ Day: who knows what message he’ll be carrying?

Denning was born in Worcester, Mass. and was raised in facilities operated by the Department of Children and Families. “I didn’t have parents in my life,” he tells me. “I reconnected with my father when I turned 18, but, before that, I was 10 or 11.”

On the subject of his hometown of Worcester, Denning has few happy memories, claiming it’s a “shitty place. There’s nothing but crack and no jobs. I hate it.”

When he turned 18 years old, he moved into a two-year shelter program for homeless youths in Somerville. The program, called ShortStop, drug tests. Although Denning doesn’t have a hard-drug background, his use of marijuana at the time caused him to be dismissed from the program. He’s lived outside ever since.

“Man, it’s so easy to be homeless,” he claims. “It’s so free. As long as you’ve got the right gear—a sleeping bag and gloves and stuff—it’s freeing.”

When I ask him what happens on really cold nights, he mentions the Harvard Square Homeless Shelter at the University Lutheran Church on Winthrop Street in Cambridge. The only entirely student-run operation of its kind in the country, the Harvard Square Shelter offers 24 beds for men and women every night.

“If I don’t get into the Lutheran church,” he says, “I won’t go anywhere else. They don’t ask questions except whether you’re sober and if you have drugs on you.”

Despite his currently difficult circumstances, Denning still has dreams and ambitions—as his Martin Luther King Jr. sign suggested. More than anything, he’d like to have his own studio apartment, a decent-paying job, and music (he loves the hip-hop artist August Alsina).

In the meantime, Denning’s experience of homelessness has given him insight into America’s social problems. Referring to the nation’s poverty levels and the increasing tensions between underprivileged communities and the police, he fears that more social unrest is on the way. “I feel like the poverty in America will cause a revolution,” he says. “I see a lot of crazy things happening in New York.”

Denning values common courtesy and hates ignorance. Although he admits he can be hard-headed at times, he has excellent social skills and gets on with people well. The kind of people you’ll see him “chilling with,” he says, “are people who don’t discriminate and who’ve been through some of the same things as me.”

One of the values of having lived through trying experiences is that they’ve taught him to see life through a wide lens and to value acceptance. “Just because you’ve been somewhere doesn’t mean you’re gonna be there for the rest of your life,” he says. “Sometimes you’ve got to go through the pain to experience the joy. I’ve been living off that saying since I was 14.”