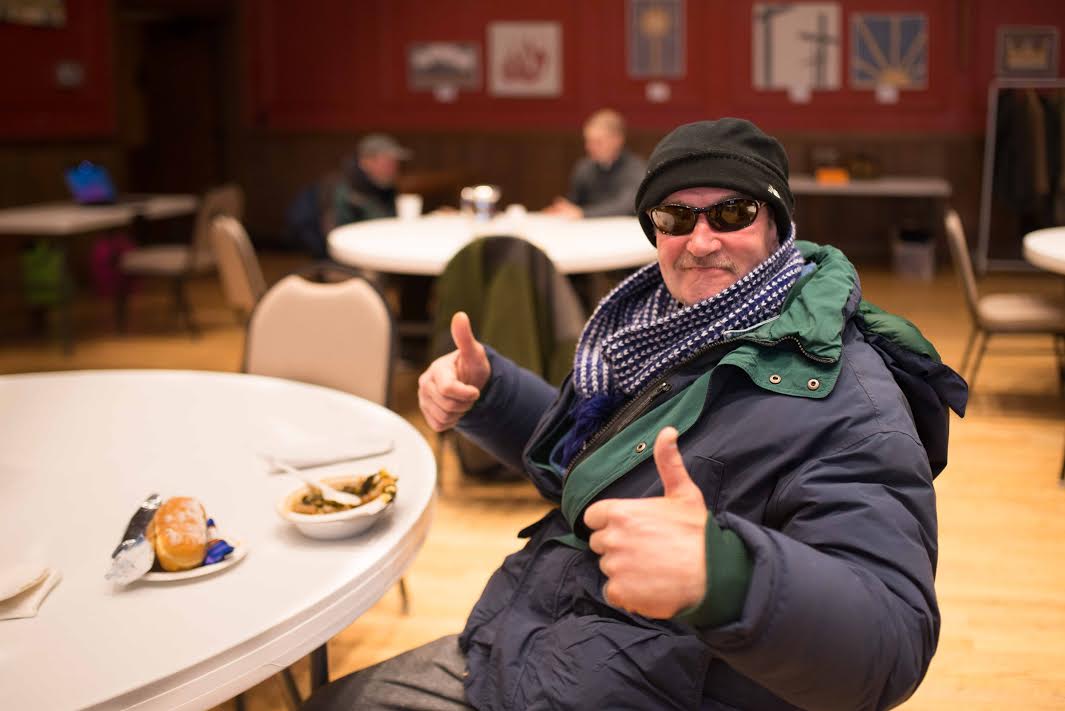 Nine round tables are strewn across the hardwood floor at First Church Cambridge, with a pitcher of water in the center of each and a couple of people at each table—mostly men this early afternoon—enjoying warm soup prepared by a local restaurant. The room is quiet at first, but as more people walk in off the street and strike up conversation with others at the tables, the familiar roar of busy chatter fills the auditorium.

The Rev. Kate Layzer is dashing around, grabbing boxes, chatting with newcomers, welcoming volunteers and listening intently to one man describe how his coat got burned after building a fire to stay warm.

Earlier that week, the winter storm known as Juno dropped 24 inches of snow on Boston. A few days later, on Friday, it’s snowing again but much lighter.

“I like the snow,” says one client, chatting to a volunteer. “It makes the city pretty. But I mean snow like today’s—not the blizzard.”

This is the Friday Café, a once-a-week day shelter where Cambridge’s homeless can get warm, eat and stay safe. The café is open from 1 p.m. to 5 p.m. and also offers coffee, a small community library, art materials and food.  It was set up last November as a pilot program and is scheduled to run until March.

Layzer, the director, says the program has been successful so far. She devised the program after asking folks in Cambridge what they needed and learned the homeless had been missing a daytime option ever since Bread and Jams Day Shelter closed earlier in 2014. After discussing her plan with First Church leaders and the congregation, the program was approved.

“It appealed to me because I thought the emphasis could be on being together,” she says. Layzer takes pride in seeing how the shelter changes clients and volunteers alike. “It changes lives in both directions. People learn to see themselves in one another.”

Layzer is now the director of another day shelter, BostonWarm at Old South Church. BostonWarm—which doubles as the nickname of its founding group, Boston Religious Leaders for Long Island Refugees—was set up as a response to the closure of the Long Island bridge on October 8. Long Island was home to the city’s largest shelter, largest detox and various recovery and transitional programs. It served 1,000 clients a day, had 450 emergency shelter beds, 60 detox beds and many more recovery beds. The week of Thanksgiving, religious leaders organized a rally in support of the Long Island Refugees, but they didn’t stop their efforts there.

The day shelter opened on Martin Luther King Jr. day and runs Monday through Friday from 9 a.m. to 3 p.m.

BostonWarm has opened a second site at Emmanuel Church on Newbury Street and is eyeing a third location at Old West Church in Boston’s West End.

The new warming centers may represent a change in the landscape of helping others: “It’s a shift to a more immediate experience,” says Layzer “We’re not just writing checks, we’re not just lobbying for justice. We’re taking the risk of having encounters and relationships.” It’s a shift toward hands-on community building and involvement.

BostonWarm at Old South offers snacks and coffee and can accommodate about 30 to 40 people at a time. It also provides 100 overnight storage lockers. The day space was put together in about nine days, including fundraising—an estimated $40,000 for the Old South and Emmanuel sites.

Operations Manager David Albaugh says BostonWarm is “in great shape thanks to a lot of great donations from the Boston area.” Churches, synagogues, mosques, organizations and individuals have all pitched in to help. However, the warming center still needs more help: toiletries, clothing, socks and gloves, among other things, says Albaugh.

“So far it’s a success beyond what we could have imagined. We’re serving from 80 to 100 individuals per day,” he continues. “They range from mid-20s to their 60s and 70s.” People of all sexualities, genders and ethnicities are welcome, he adds.

The Rev. John Edgerton, assistant minister at Old South Church, has been involved in community building for much of his career, or as he calls it, “working with the church outside our walls.” He says that, from the moment BostonWarm opened, two groups emerged: one team handling direct services and the other encouraging the city to take action.

Edgerton believes BostonWarm and the city have different perspectives on the issue. While the city has done some good work during the crisis—like building the new Southampton Street shelter and establishing the 90-day homelessness task force—“our concern is that the fact it’s winter is being overlooked.”

Also worrisome is the loss of detox beds and residential recovery programs—something that’s out of the churches’ control. “There’s no way we can open even one detox bed,” says Edgerton. “We can’t issue a permit to turn a brownstone into a detox center.”

However, BostonWarm’s actions to spur the Walsh administration into action “may have been counterintuitive,” Edgerton notes. Campaigns like pre-written postcards, persistent attempts to meet with the mayor and attending city forums on the relocation of the Long Island services didn’t sway the city. “We don’t want to make the city look bad,” says Edgerton. “We just want them to know we’re an organized group of people with concerns.”

Edgerton says the group is willing to help the city—for example, by helping to secure storage. The new Southampton site has no lockers at the moment and people desperately need to store their belongings. “The city’s not the enemy,” says Edgerton. “The cold is the enemy. Heroin is the enemy.”

The Southampton Street shelter is still a work in progress and won’t be finished until spring. However, warming shelters like Friday Café and Boston Warm will still be around to fight the cold.