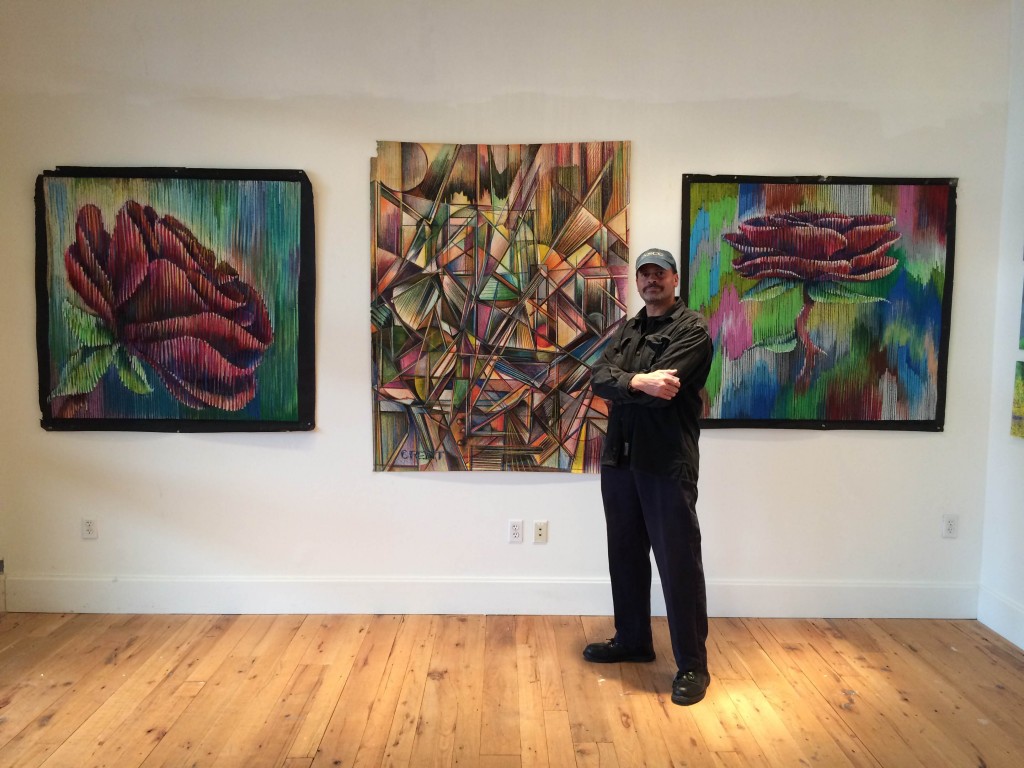 Jeffrey Powers, an undeniably talented artist whose work has been shown in galleries on Newbury Street, was also homeless for nearly four years in Boston, living in shelters and on the street where he found places to keep as warm as possible during the frigid winter months.

Powers is also a former Spare Change News vendor, a gig he held from 2011 to 2013. Now, Powers is one of 45 artists featured on ArtLifting, a website that sells paintings and other works by homeless and disabled artists, who receive 55 percent of the total sale price of their art.

Powers is a self-described free spirit, an explorer. He was raised in various Boston neighborhoods, the son of a Harvard-educated public school teacher. Powers has long had an interest in painting. He studied art at Syracuse University and later at MassArt in Boston. In 1989, he started his own commercial art business, JAP (his initials), creating business logos, graphics and paintings on commission.

For years, he helped care for his ailing and aging mother, but when she eventually moved into an Assisted Living facility and no longer required his constant care and attention, Powers felt an impulse to explore the world beyond the confines of Boston. He adds that he felt compelled to move due to what he describes as the increasingly inhospitable racial and political climate in Boston. And complicating matters, addiction had set in. Powers felt it necessary to put distance between himself and his family and says he wanted to expand his understanding of what this country is about.

Powers set his sights on the western United States, selling his art in cities such as Las Vegas and Denver. He also lived in Atlanta for a time. He sold much of his art on the streets while continuing to sell through JAP. He notes that personal tastes and interests in art subjects vary across the country. While living in Atlanta, for instance, he observes that Martin Luther King Jr. and other notable figures of African-American history were popular and in demand.

Out west, portraits of Native Americans and subjects relating to nature and wild animals were often requested. “People always wanted that elk, that eagle, that trout jumping out of the water, or that Native American riding on a horse,” says Powers. Here in Boston and on the East Coast, he observes that the tastes of his customers tend to be more commercial, and he’s often commissioned to paint portraits of celebrities such as Rihanna, James Dean, Beyonce, Britney Spears or Tupac.

Of his own personal experiences and their influence on his art, Powers says: “I felt it was important to explore every facet of life and not look down or think you’re better than, but to understand, relate to and empathize with the human condition, in order to do my art.” Powers prefers to work in pen and ink or oil pastels, and he loves to work on the third floor of the Boston Public Library, where, he says, “it’s quiet and no one bothers you.” He mentions many artists he both admires and considers to be influences on his own style: Degas, Picasso, Rembrandt, Salvador Dali and the Pointillists. Powers says of Dali, “his imagination kills me.”

Powers eventually settled back in Boston around 2006, just in time for Deval Patrick’s historic election as the governor of Massachusetts. Powers was homeless for a period, living both on the streets and staying at the Shattuck Shelter—a time in which he describes himself as “being adventurous and doing wild and crazy things.” He learned how to find the warmest spots on the streets: behind the Lenox Hotel and Copley Place, for instance. While he cherished the experience of working as a Spare Change News vendor and was even able to publish some of his art in its pages, he found selling the paper in the frigid winter months to be grueling.

In 2013, he obtained a Section 8 housing certificate, a critical ticket out of homelessness and toward an independent lifestyle. Powers also fell in love and got married around this time. He and his wife have a three-year-old child together, and they now have stable and secure housing. As much as Powers has passion and talent for his art, he’s also fully aware of how difficult it can be to sustain a living solely by creating and selling his art.

With this in mind and seeking a more secure and reliable career, he became a Personal Care Attendant and currently earns a living caring for a disabled woman in her home, who, interestingly, is also a former Spare Change News vendor and was awarded the “Vendor of the Year” laurels. He sells his art through JAP and now, ArtLifiting.

In 2014, Powers made a powerful new connection while participating in a drop-in art group called Common Art, held on Wednesdays at the Emmanuel Church in Boston. It was there he met Liz Powers (no relation to Jeffrey), who, along with her brother Spencer Powers, co-founded ArtLifting, an innovative organization whose mission is to empower homeless, disabled and disadvantaged individuals through the celebration and sale of their artwork. ArtLifting started in 2013. Powers took note of Jeffrey Power’s talent and approached him about selling his art on the website. Powers currently has about six or seven works on the site.

Before devoting her full attention to ArtLifting, Powers worked as an art facilitator, running art groups for homeless and disabled individuals in shelters after graduating from Harvard with degrees in Art History and Sociology. She was impressed by the natural talent surrounding her that often went unrecognized. She saw the potential to market these art works and to help artists earn a living or supplement their incomes by selling their art to a wider audience.

To date, ArtLifting features the work of 45 artists and works with artists in seven cities across the country. Artists receive 55 percent of the selling price of each work, and Powers notes that ArtLifting affords artists the opportunity to sell their work at a significantly higher price than they would otherwise command if selling their art on the street.

ArtLifting employs a chief curator, Stephanie Wright, who selects pieces that are featured on ArtLifting. Wright has a degree in art history from Stanford, as well as a master’s from Christie’s in London.

In addition to its website, ArtLifting recently celebrated a gallery reception and opening at the Design Center in the Seaport district of Boston on January 29. Powers heralded this event as a great success that was well attended and offered a great opportunity for the general public to view the works of ArtLifting’s artists. The gallery will be open to the public until March.

The artist is grateful for the opportunity that ArtLifting has given him, and he hopes to produce and sell more of his work for them. He understands the opportunity is there to make a significant amount of money for just one of his pieces, and this inspires and motivates him. “I believe ArtLifting makes possible what some artists can only dream of: to be acknowledged as a serious artist who is worthy of equal compensation,” continues Powers.

Powers notes that both Liz Powers and her curator have a good eye for the market and have a keen sense of what type of art is likely to sell. Liz Powers observes that right now, some of ArtLifting’s biggest customers are corporate buyers seeking to decorate their office spaces and who promote ArtLifting’s mission by displaying its logo on the paintings purchased from its website.

Powers continues to supplement his income with his artwork, sold through JAP and ArtLifting. He has also nurtured many contacts and connections throughout the country over the years and is currently working on various commissions, many of them for security guards he has come to know. These include family portraits, a portrait of Elizabeth Taylor and portraits of historical Haitian leaders. Although Powers remains focused on saving enough money to buy a home for his family, he says he would love to have one of his paintings displayed in a museum. “I’m hoping to somehow produce a piece of art that will end up in a museum one day, but for now, I’m not trying to be famous. I’m trying to find the thing that interests me enough to create something great,” he adds.

Maybe, just maybe, Bostonians will have the opportunity to see a Powers painting side by side with a Rembrandt at the Museum of Fine Arts. With ArtLifting’s support and publicity, this dream could become a reality for both Powers.

For more information about ArtLifting or to take a look at some of Jeffrey Powers’ work, visit www.artlifting.com.