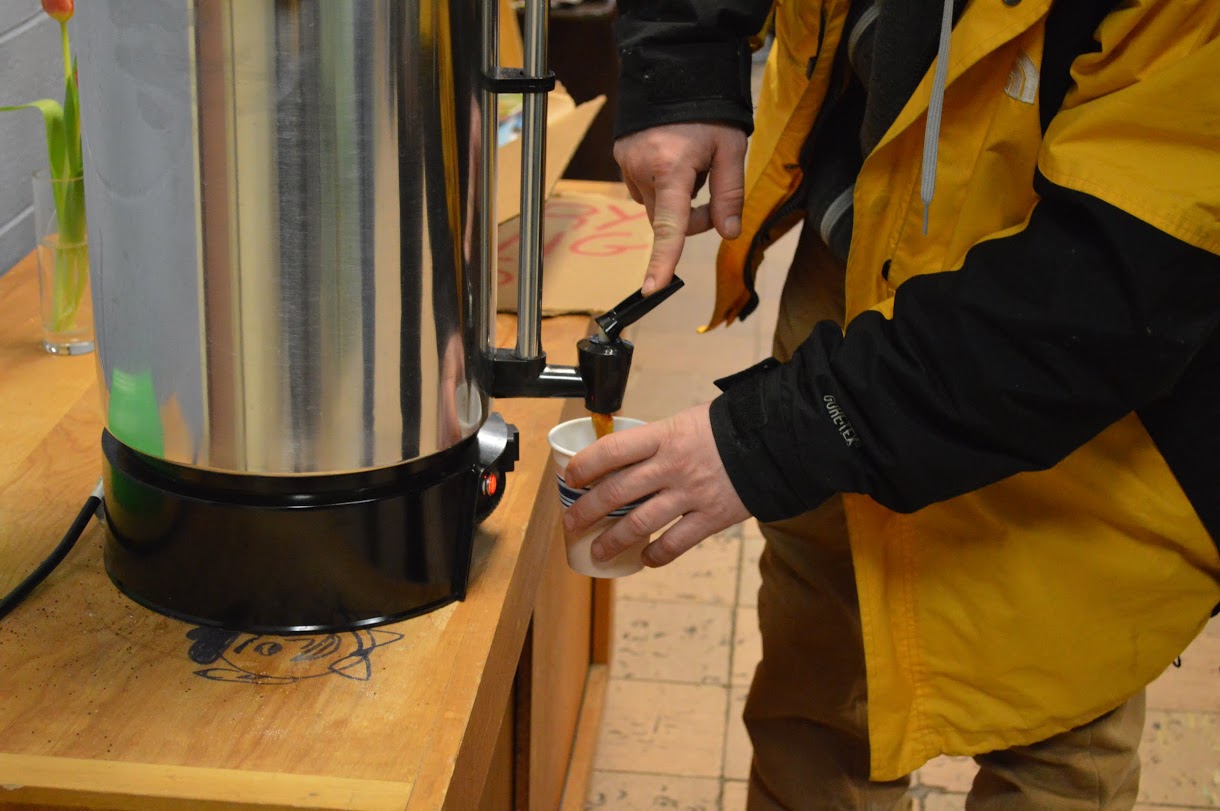 It’s a warm, safe haven for homeless people to gather, relax and socialize on Monday through Friday.

BostonWarm’s hours are 9 a.m. through 3 p.m. five days a week, and the new space offers a wide range of essential services, including much-needed locked storage. The main room is welcoming for people who walk down from the street and has been sectioned into a den and sleeping room.

Two volunteers and a pair of trained staff welcome people into the living space, which is surrounded by a group of couches and chairs. People can sit down to drink coffee and eat a wide range of treats including cookies, fresh fruit and sometimes salad. The menu changes daily. They also have hot packaged food provided by one of the organization’s corporate partners.

The back area is covered with a floor-to-ceiling curtain that serves as a sleep room. People who have trouble resting at night can unwind here. The room has space for 10 to 12 folding cots.

Small orange containers, in a secure locked room, are available for the homeless so they can store their belongings. People can store any belongings with the exception of alcohol, cigarettes and prescription drugs for up to two-and-a-half months.

One of BostonWarm’s volunteers says: “The city of Boston and Old South Church has set a capacity level of 40 people at any given time. We’re keeping a tally of people walking in and may have to regulate levels. We’re also averaging about 80 to 85 people each day of our opening week.” Volunteers consisted of women and men.

According to organizers, the shelter is a temporary day center that will be open for the next three months until Friday, March 31. Its opening is in response to the city’s inability to offer sufficient beds and to relocate recovery and storage facilities to accommodate the people who were displaced from the Long Island shelter.

BostonWarm @ Old South is the work of a Greater Boston interfaith group called Religious Leaders for the Long Island Refugees. This coalition formed in November and has been advocating feverishly for Boston’s homeless. They have a goal of raising $40,000 to run the Copley Square location and have just opened an additional day center at Emmanuel Church on Newbury Street.

According to the senior minister of Old South Church, Nancy S. Taylor, the coalition formed in November and grew quickly in size—a response to the city’s failed attempt to adequately house the homeless after the Oct. 8 closure of the Long Island bridge and, with it, the closure of the largest city-run shelter in Boston.

”We started to develop plans when we realized the city’s planning strategy failed after they turned down our offer to help raise funds and provide space,” continues Senior Minister Taylor. “We also have a large coalition including clergy from many denominations.”