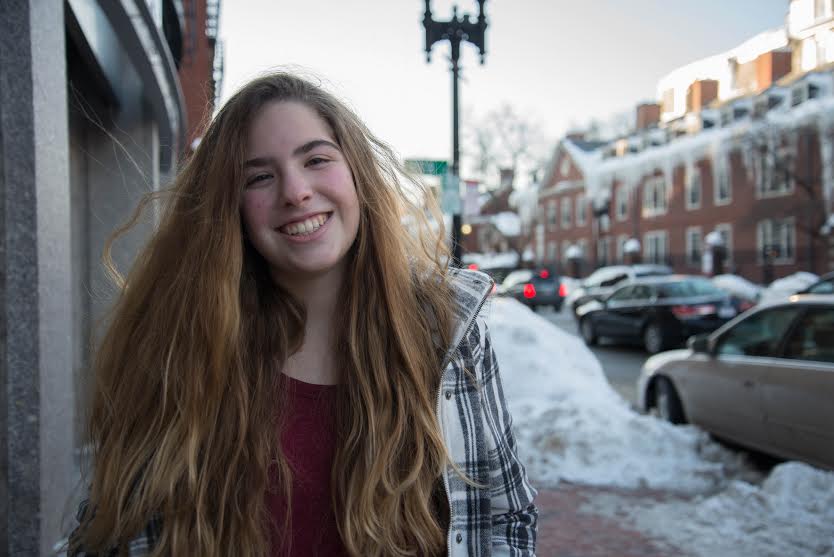 Joanna Munson-Palomba, like most Boston commuters, notices panhandlers on the streets daily. She has a round-trip commute of three hours, which takes her through Harvard Square. Five days a week, she takes the Red Line to Downtown Crossing and the Orange Line to Jamaica Plain. She wants to make a difference for some of Boston’s homeless by collecting gift cards instead of cash, and she’s only 14.

Homelessness is an issue that Munson-Palomba has cared about since she was very young, and after transferring to Meridian Academy in Jamaica Plain for eighth grade this year, she was inspired by the project-focused school to start something at the local level.

“It’s scary to see how many people are on the street without people helping them,” Munson-Palomba says. “I think it’s scary to a lot of people, and as much as we try to dehumanize people who are panhandling, they are still people.”

Munson-Palomba approached her marine science teacher and community group leader Stephanie Kinkel for guidance with her extracurricular project, and right away connected with the idea of collecting gift cards. Kinkel already had a habit of storing $5 Dunkin Donuts gift cards in her wallet and in her car for the purpose of handing them out to the homeless. “It just feels like a better way to give back than cash,” Kinkel adds.

With Cards for a Cause, Munson-Palomba is trying to solve the trust gap that many associate with giving money to the homeless. “It’s not the issue that no one wants to help, it’s the issue that there’s no way they are assured that they are actually doing good. And this was a solution,” Munson-Palomba says. Those who donate money can choose what location they want the money to go to, such as a grocery store or coffee shop, donate a spare gift card, or leave it up to Munson-Palomba to decide what the greatest need for gift cards is.

The eighth grader is also doing her homework to make as big an impact as possible. “I think going to the source is easier than thinking I know what they need,” she says. Because of its proximity, Munson-Palomba has decided to start with distributing gift cards to the Harvard Square Homeless Shelter. After corresponding via e-mail with one of the homeless shelter’s organizers (David Tang-Quan), she decided to wait until November to start distributing so she has more time to collect gift cards and give them out during the winter, the season of greatest need. Harvard Square Homeless Shelter declined to comment on distribution plans until they had figured out the details themselves.

The campaign page is currently housed on Indiegogo, one of the many crowdfunding sites out there. Munson-Palomba gave some thought to which site she wanted to start off with, and while Indiegogo only allows for two-month stretches for each project, Monson-Palomba says that Indiegogo “had that little box next to arts and theater that said community.” As of February 23, Munson-Palomba had surpassed her initial goal of raising $500 in the first two months of accepting donations. By distribution time in November, Munson-Palomba hopes to double the impact. But why call it a charity?

“It’s not a short-term goal,” she says. “It’s a long-term goal to form a charity using this form of helping. I want to start here and have other communities take part in it and have it spread.”

Once the initial Indiegogo page concludes on April 12, Munson-Palomba plans to work on launching a website for donations, as well as setting up a Facebook page and other forms of social media. Munson-Palomba is wise enough to know that she isn’t solving homelessness, but she still hopes to make a small difference. “I’m making them comfortable for a day, a week or even a month. I’m hoping it can help someone, and that’s how I see it helping,” she emotes.