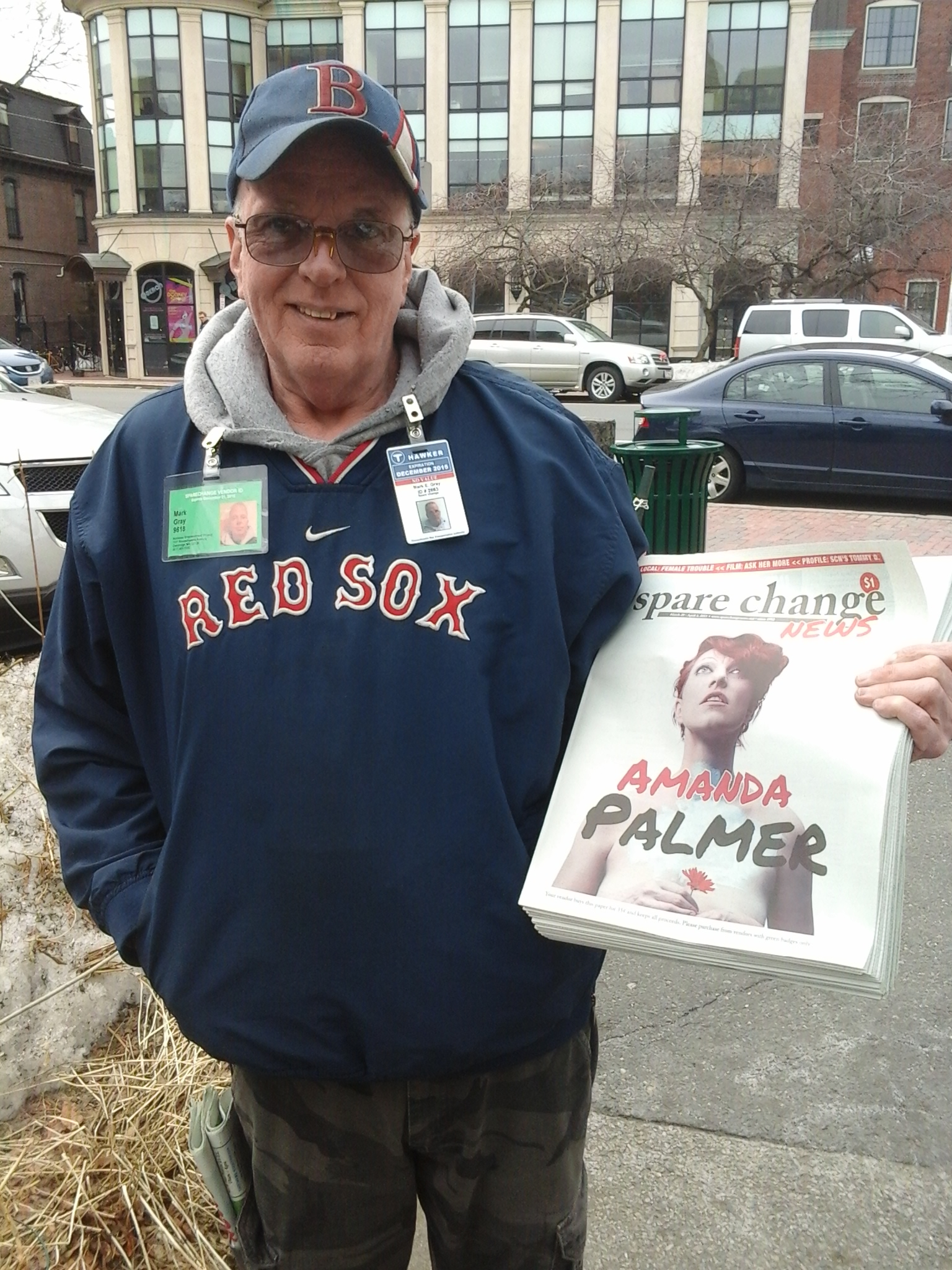 Selling Spare Change News provides an obvious financial reward for the newspaper’s homeless, formerly homeless or financially strained vendors. But for some, the reward has an extra therapeutic dimension, which proves beneficial in their transition from the streets, as the story of this week’s profiled vendor, Mark G., makes clear.

Anyone who’s experienced addiction to alcohol or drugs will know it’s an enormously isolating experience. Rather than letting other people become the focus of your life, the substance becomes your center, your number-one concern. It’s no surprise, therefore, that recovering addicts and alcoholics, who are used to doing things their own way, are tempted to remain isolated even in recovery.

There are few things more guaranteed to help overcome isolation than selling Spare Change News in the heart of Davis Square in Somerville—which happens to be Mark G.’s spot.

Not that selling the newspaper is always easy—I’m sure it can be an isolating experience if people are disrespectful—but Mark describes his job as a vendor as a positive factor in his recovery from addiction and isolation: “It has a very positive therapeutic effect on me. I tend to stay in my shell… It’s gotten me outside myself,” he says.

Mark became homeless 15 years ago in the middle of his active addiction, which he describes in five words: “compulsion and loss of values.” After two attempts at sobriety lasting between five and seven years, he’s now been sober for four years and feels like things are different this time: “I’m putting more effort into recovery. There were a lot of things I wasn’t doing [before].”

The transition from addiction and homelessness to recovery and housing began in 2011 when Mark entered a treatment access program. Fortunately, one of the staff members at the program was in a 12-step fellowship and reached out to Mark. He then spent six months in a halfway house before moving into a sober shelter run by Somerville Homeless Coalition on Chapel Street in Somerville.

As well as seeing a caseworker at the Homeless Coalition, Mark found the support of a 12-step fellowship vital to his period of transition from the streets and active addiction. In fact, it was someone he met at his 12-step meetings who introduced him to Spare Change News and suggested he become a vendor: that man was Joe M., whom we profiled in the newspaper last month and who’s been sober for 29 years.

Although Mark admits that “resources are out there” for homeless people and recommends that people be “persistent” in their pursuit of them, he recognizes that it’s one thing for resources to exist and another thing for people to be able to actually take advantage of them, especially when they’re experiencing addiction.

Untreated alcoholism, says Mark, is a “roadblock to any progress or future—to growth.”
If there’s one thing Mark’s story makes clear, it’s that resources must be in place to help all homeless people in need, but, for those experiencing the ravages of addiction, it may take more than the offer of practical help to give them a stable existence. “I had to deal with recovery and let go of the addictive behaviors,” he says, citing his earlier “defiance, arrogance and ignorance.”

In terms of his sobriety, Mark is clearly “one of the lucky ones,” as they say in 12-step meetings—because sometimes there really is no other way to explain why some people change and others don’t.