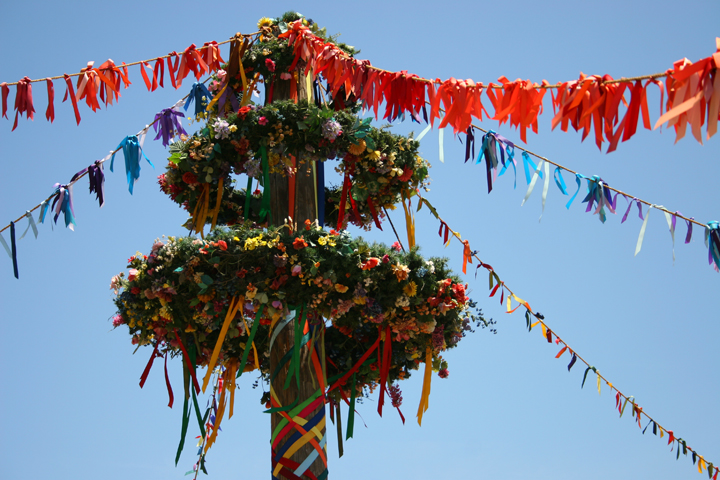 For a moment in the seventeenth century, Massachusetts had the potential to become a fun-loving (and free-loving) utopia, rather than the grim, hard-working Puritan domain it became. Granted, it was a very brief moment, but it’s important to remember the possibility existed.

The man behind the utopian dream was Thomas Morton, who arrived in Plymouth Colony from England in 1624. He soon learned that he did not fit in. The Pilgrims who founded Plymouth were primarily farmers and craftsmen who wanted to escape the English church. Morton was a lawyer educated in the Latin classics and a staunch Anglican. The Pilgrims had come to found a New Jerusalem. Morton may have come to escape legal problems.

By the fall of that year, Morton and several other men left Plymouth and headed north. They founded a new settlement called Merrymount in what is now the city of Quincy.

The settlement’s name reflected Morton’s vision of how life should be lived. The Pilgrims were too hardworking for Morton’s taste. New England was a land of bounty and beauty—life should be enjoyable and merry. The name Merrymount also contained several puns, relating to the Latin words for sea, mare, and sexual intercourse.

Word about Merrymount reached Plymouth, and the Pilgrims weren’t too happy. They nicknamed Morton’s settlement Mt. Dagon, after the pagan god mentioned in the Bible, and kept a watchful eye on their new neighbor.

Morton and the men of Merrymount quickly developed friendly relationships with the local Massachusett Indians. The Merrymounters eagerly traded firearms with them in exchange for beaver furs, which were an expensive luxury item back in England. They were happy to socialize with the available Indian women, whose physical charms Morton extolled in his book New English Canaan.

None of this sat well with the Pilgrims. They didn’t approve of giving firearms to the Indians or of interracial love affairs. It also seems that people who were unhappy with the strict rules in Plymouth were beginning to flee north to Merrymount. Tensions between Thomas Morton and the Pilgrim leaders grew stronger.

They came to a head in May of 1627. Under Morton’s direction, the people of Merrymount erected an 80-foot Maypole crowned with stag’s antlers. They then invited the Indians to celebrate an old-fashioned English May Day, with dancing, heavy drinking and the shedding of sexual inhibitions. To mark the occasion, Morton composed a poem that invoked ancient Roman gods and mocked the dour Pilgrims.

It was the last straw. The Pilgrims considered Morton’s Maypole to be pure heathenism and an affront to God. A troop of armed men, led by Myles Standish, marched on Merrymount and forcibly sent Morton back to England. The Maypole was cut down.

Unwilling to let his dream die, Morton returned to Merrymount in 1630. He was again sent back to England, and Merrymount was burned to the ground. Morton came back one last time in 1643, but he was imprisoned in Boston and exiled to Maine, where he died in 1645 at the age of 69.

As the snowiest winter on record finally ends, it seems appropriate to remember Thomas Morton and his short-lived utopian community. Shut off the computer, get up from your desk and go outside! Spring is here, and for a little while, at last we can shed our dour Puritan heritage.