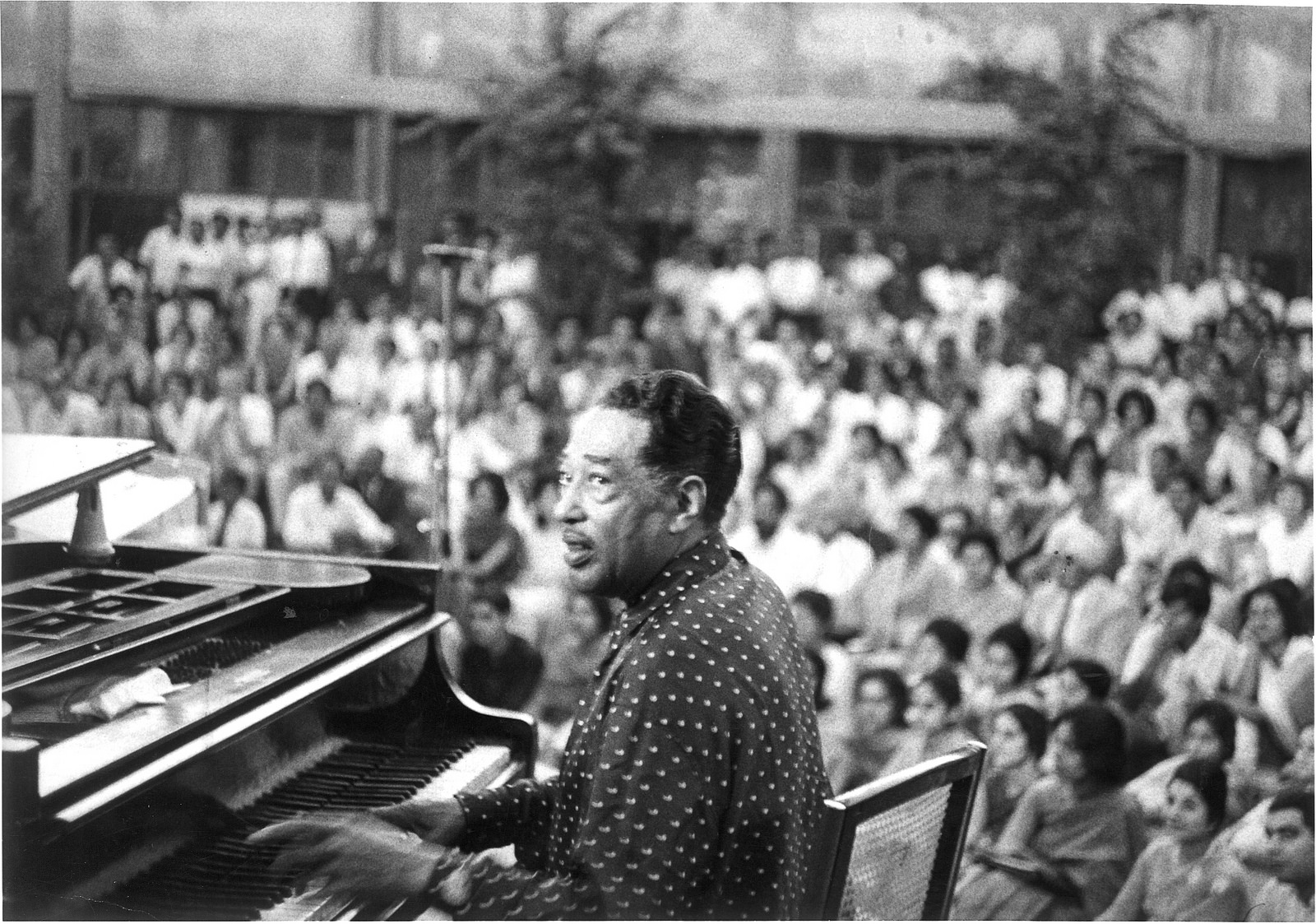 Duke Ellington is having a pretty busy spring for a guy who’s been dead for 41 years. The New England Conservatory Jazz Orchestra devoted half of their April 16 Jordan Hall show to precise and spirited recreations of Ellingtonia. On April 19, trumpeter Greg Hopkins brought his hot 18-piece big band to the Beat Hotel for a jumping night of tunes by Ellington and his co-writer, Billy Strayhorn.

April 29 was the Duke’s birthday, his 116th. In death, Edward Kennedy Ellington has become a cultural immortal, but during his 50 year career, the Ellington’s reputation was often in flux. As late as 1965, Ellington was denied a Pulitzer Prize for his lifework, a move ascribed to both anti-jazz and anti-black sentiment. Through the ’50s and ’60s, Ellington’s ability to keep his orchestra on the road became a heroic effort. No other big-band leader has managed continuous survival. Only Duke.

In recent years, I find myself listening to Ellington’s music every single day. Whatever decade I delve into, my daily trips to Ellington land never fail to perk my mood and widen my view of life. The Duke’s diverse music is the main inspiration, of course, but it is also the artist’s canny way of surviving the market-place that inspires me to plug on with my own private, uncelebrated struggles.

In the late ’40s, when pop tastes changed from swing jazz to mellow vocals, the expense of keeping 16 musicians on the road was killing. At first, the invention of the long-playing vinyl album made things worse for Duke: Columbia, his label, favored classical music, and Ellington had to wait two years to record his first LP. Through the early ’50s, both Columbia and Capitol asked Ellington to play it safe by rerecording his old hits. He responded with reinvigorated versions of his 1930s classics: simply some of the most superb albums in jazz history. But at the time, they made no waves. The word in the media was that the Duke was in his demise. Some of his best musicians left him, including Cambridge native Johnny Hodges, the most rhapsodic alto sax soloist in jazz history.

How did Duke respond? Always a staunch individualist, he refused to copy new jazz trends but never stopped progressing, either. Styles like bebop, post-bop, cool and world music entered into his lexicon not as emulation but transformed into pure Duke. A few younger band-members came to the fore, principally tenor saxophonist and Brockton native Paul Gonsalves. And though many players left Duke over the years, he never lost their regard: some of the very best came back to the fold, most famously Johnny Hodges, Juan Tizol and Cootie Williams. He inspired loyalty. Baritone sax giant Harry Carney, a Boston native, stayed with him for 47 years.

Ellington was criticized for rarely giving his players the co-writing credits they deserved. Yet he had a method: the royalty money went directly into the band. It was the one thing that kept the orchestra afloat, and in the ’50s, when Satin Doll became his most widely interpreted hit, his catalog’s royalties allowed Duke to pull off a feat that, in his own way, turned the tables on the recording industry. From 1956 all the way to 1970, Duke would regularly assemble his salaried regulars in his favorite recording studios, paying for the studio-time and producing the sessions himself. Often, he’d come to the studio at close to midnight with just a few scribbled notes. Then Duke would verbally guide the band through new, partially composed material, finishing the sessions at dawn. He called this music “his stockpile.”

The Private Collection was not released until after his death. It comprises 10 full CDs, some 150 selections, including some discs that are among the most expressive jazz ever recorded. The commercially manufactured albums he recorded during those same years ranged from works of matchless genius all the way down to commercial corn. Survival was more important than unimpeachable hipdom. Over the decades he played thousands of mundane dance dates in far-flung states. He risked his jazz rep by recording holiday ditties and Mary Poppins songs. But The Private Collection, “the stockpile,” was his last laugh in a fickle music industry.