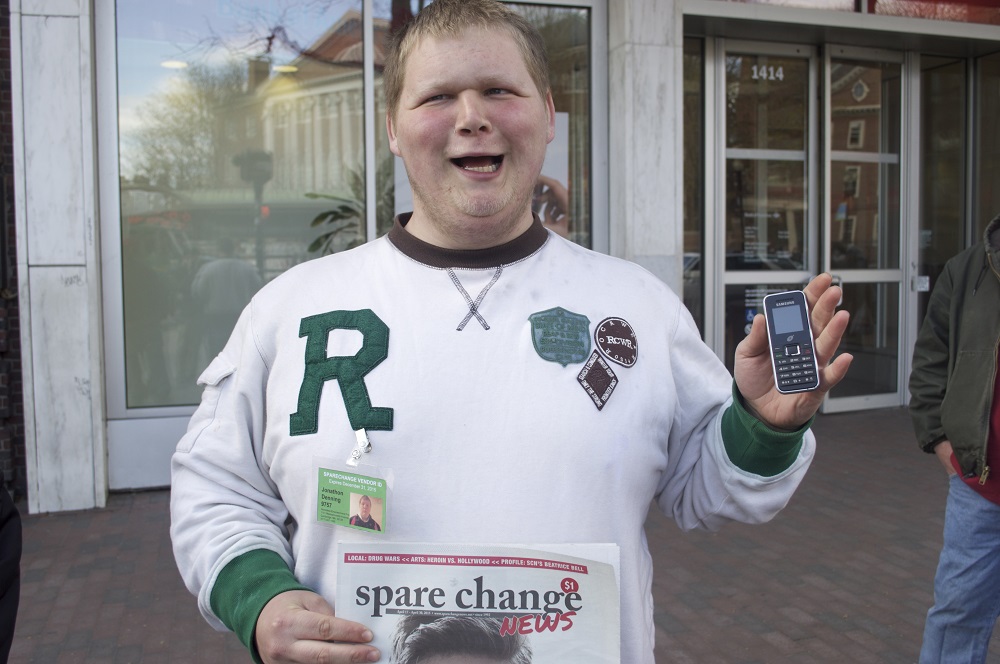 In Harvard Square, the paths of the smartest students in the world cross every day the paths of those who spend day and night trying to find a place to stay safe and warm.

“One thing that I was immediately struck by was the volume of homelessness on the street,” says Cindy Yang, a student at the Harvard Graduate School of Education.

Yang’s impressions of homelessness later evolved into a sense of inspiration that motivated her and her fellow schoolmates, Farhan Quasem and Hannah Fidoten, to help this vulnerable population. That’s how their startup, Mobilizr, came into being at the Graduate School of Education’s first hackathon last October.

Currently, Mobilizr focuses on providing more Internet access to homeless people who live in transitional housing. Yang mentions that those clients usually live in government subsidized housing or other types of housing on their own. More often than not, they don’t have an Internet connection in their home.

Mark Alston-Follansbee, executive director of the Somerville Homeless Coalition, wrote in an email interview with Spare Change News that most homeless people he works with go to WiFi-friendly spots, such as Starbucks or Mr. Crepe and “nurse a coffee for as long as they need the connection.”

When it comes to using online services—applying for jobs, for example—Alston-Follansbee says, “we have a computer for guests at the shelter but no wifi.” Instead, most of the clients’ housing and job-search work takes place with the Somerville organization’s case managers. He adds that last year, 48 percent of the homeless people at the Coalition successfully moved into permanent housing.

“We wish that was 100 percent, but the reality is people have many barriers, and there is not enough housing that is safe and affordable,” Alston-Follansbee continues.

For homeless people who live in transitional housing, the target group that Mobilizr is helping have their own barriers. “Even if the shelter has a computer lab or WiFi, the clients have to travel all the way back to the shelter from their government subsidized homes, which could be dispersed in different areas,” Yang points out.

When Mobilizr first emerged, its creators found it difficult to collect data regarding how many homeless people in the Boston area actually own WiFi-capable devices or have access to the Internet. They recognized “consistent access to the Internet was a major pain point” after spending a weekend interviewing homeless individuals and case managers in transitional housing programs.

In a recent interview with the Boston Business Journal, Quasem mentions that they planned to run successive pilots with local homeless shelters and transitional housing projects. “Our goal is to impact 70 lives in three months’ time,” he says.

In fact, Mobilizr’s first pilot helped eight homeless individuals by giving out second-hand and donated smartphones. “The first pilot is really focusing on testing the concept. We didn’t want to spend much time fundraising just yet,” Yang adds. “We’re definitely ambitious in terms of how quickly we want to grow. But I think we’re still trying to figure out the landscape in the Boston community.”

In its second pilot, Mobilizr has already received a $500 donation from the Harvard Coop and $1,000 from a pitch competition, as well as an additional $500 from various individual donors through its crowdsourcing website. This time, they plan on helping more homeless people gain access to the information they need.

“For the second pilot, we’re giving our users new smartphones that have pretty large screen size … and we’re equipping them with a three-month three gigabytes data plan, because a lot of homeless people live in areas where WiFi is not readily available,” Yang adds that they are working actively with wireless providers and other sources to reduce the costs of smartphones and data plans.

“Once you have more Internet access or you have a smartphone, you become more reachable,” Yang says. “What we hope to do is to get these clients [in transitional housing programs] out of poverty faster.”