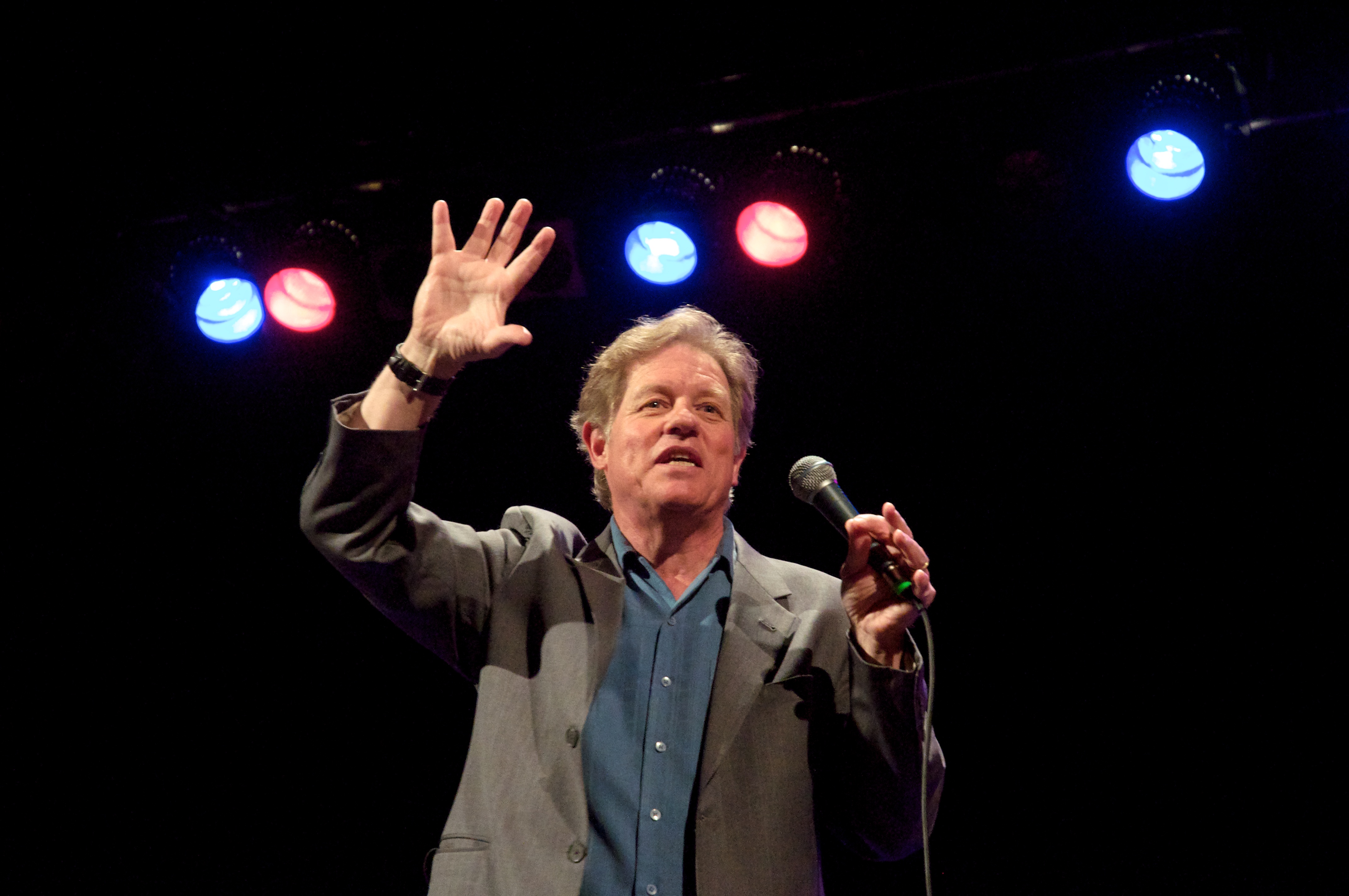 Jimmy Tingle, much beloved comedian, is a like a favorite son in Cambridge. He has enjoyed a large local and national following for several decades. In fact, he grew up and continues to live in Cambridge. He has long been interested in issues of social justice and is known for his humorous political commentary. Remember 60 Minutes II?

A graduate of the Harvard University Kennedy School of Government, Tingle has now launched a new social enterprise, Humor for Humanity. Tingle is also the keynote speaker at the upcoming Spare Change News anniversary gala on Tuesday, May 12 from 6-9 p.m. at the Microsoft NERD Center.

Spare Change News caught up with the veteran comedian over breakfast in Harvard Square, whose streets he knows well and where many locals know and recognize him.

Tingle is an extremely down to earth, easy going and naturally funny guy. He doesn’t even seem to mind that I arrive at our sit-down breakfast 10 minutes late, or if he does mind, it certainly doesn’t show. He has accomplished a lot throughout his career as a comedian. He has been on numerous national TV shows, performed stand-up all over the country, acted in a few Hollywood movies (including a stint as a priest in the cult hit The Boondock Saints) and has written, produced and starred in a documentary film, Jimmy Tingle’s American Dream, which was broadcast on over 60 PBS affiliates.

Yep, Tingle is no joke.

When I ask him how he would describe himself at this stage in his life, he deadpans, “world leader.” Then he replies more seriously with “comic, commentator, entertainer, social and political humorist and activist.” Tingle has long done what he calls “one-offs,” performing at fundraisers and benefits for various nonprofits and charitable organizations. After deciding to close Jimmy Tingle’s Off-Broadway Theater in Somerville’s Davis Square in 2007, he enrolled in Harvard’s Kennedy School of Government and earned a master’s in public administration in 2010. He was even the keynote speaker at Harvard’s commencement that same year.

On his decision to return to school, Tingle says he was ready to do something different, and he wanted to have more of an impact, if possible, than simply entertaining. He wanted to further his education and broaden his horizons. It seems that Tingle has accomplished all of those things.

“The nice thing about going to back to school in your fifties is you get the student ID and the senior discount,” he jokes.

Tingle recalls that he loved the experience of graduate school. Not only was he surrounded by fellow classmates who were corporate CEOs and leaders of NGOs from around the world, about half of his class of 200 students were from other countries.

It was during this program that he had the inspiration and idea to start his own organization that would make a difference and help nonprofits—where he could continue to use his trademark humor and comedic skills but within a more formalized and structured framework.

He remembers that many of the class discussions in graduate school involved Jon Stewart, Stephen Colbert and other late night comics. He realized how culturally important entertainment can be and was inspired to “do what he is uniquely qualified to do,” which is to use his skills as a comedian to help nonprofits do the work they do. As academically challenging as the program was, Tingle recalls, “it was great.” He was continually inspired by his fellow students, who were diverse in terms of age, cultural background, professional and life experience and political point of view.

Humor for Humanity, described as a social enterprise, is still in its early stages and is, for Tingle, a blend of entertainment and activism and a way to formalize much of the work he’s done in the past, namely, performing at charitable fundraisers. Tingle works with an assistant, and the enterprise’s working mission statement is: “More than entertainment. Raising spirits, funds and awareness for nonprofits, charities and social causes. Our mission is your mission.”

Tingle says that his experience and education at Harvard were instrumental in starting this enterprise. As a stand-up comedian, he says, you work on your own. It’s a solo endeavor, for the most part. In graduate school, he learned about the value and importance of collaboration in starting and running organizations.

Via podcasts and web-based TV shows, Humor for Humanity’s aim is to raise the profile of nonprofit organizations. It can help boost ticket sales and increase the attendance of fundraisers and charitable events. Thus far, the shows and podcasts have featured Tingle providing some of his trademark comedy, interviews with founders or directors of nonprofits, calls from local celebrities who support the causes and information on the work the organizations do. Tingle says he simply wants to help these organizations do the good work they’re already doing and help them to achieve their missions.

Humor for Humanity is promoted via email lists, social media, Tingle’s live performances and his website jimmytingle.com. Organizations interested in participating in a podcast or show can register on the website via a booking form. So far, three podcasts have aired, featuring local organizations such as Vecna Cares Charitable Trust, Caron Treatment Centers and the Cambridge Weekend Backpack Program.

The model and format for the shows is still being worked out, but most important to Tingle is that he is helping to spread the message and increase exposure for various social causes and endeavors.

The goal, Tingle says, is to offer organizations the opportunity to do a podcast or show, as well as have Tingle perform at a fundraising event, as a sort of combination package. For the time being, most of his time and energy is devoted to Humor for Humanity. All he wants, he says, is “to work out the kinks,” which are not uncommon for a new start-up, and “make it work.”

Tingle says that some of the social issues he’s particularly interested in and passionate about include substance abuse, gun control, violence prevention and homelessness.

His Catholic faith and upbringing had a strong impact and influence in shaping his worldview and passion for social justice, as did his family’s own involvement in local politics and social service agencies. Tingle says that the motivation to help people was ingrained in him from a young age. Tingle himself worked for a period counseling adolescents in a program of the Department of Youth Services.

When the subject of homelessness was brought up, Tingle spoke about knowing people he grew up with, who, for various reasons, have experienced homelessness. He also mentions “a kid from the neighborhood,” who he learned had recently died of a heroin overdose and who had been living on the streets for many years. “There’s a lot of work to be done in terms of figuring out the best way to help homeless people.”

Shelters, he says, aren’t the solution. He acknowledges he’s not sure what is, but he believes that an adjustment is needed in terms of how homelessness is being addressed. The root causes of homelessness are complicated, he says. They go beyond mere lack of housing and are related to problems including unemployment and substance abuse.

Tingle is an enthusiastic supporter and champion of Spare Change News. He performed at a Spare Changes News fundraiser in 2014 where his documentary Jimmy Tingle’s American Dream was screened. He’s also written for the paper. This past January, Tingle performed at the Sanders Theater in Cambridge, which served as a soft launch for Humor for Humanity, and attendees had the option of making a donation to Spare Change News, among a few other nonprofits, on top of the ticket price of the show.

Tingle appears excited and hopeful about Humor for Humanity—the possibilities it offers and the directions it could take. One goal, he says, is to have the shows broadcast on TV or radio but that has yet to be determined. In the meantime, it is clear that this new venture is a perfect way for him to combine his passions for both comedy and doing good for others.