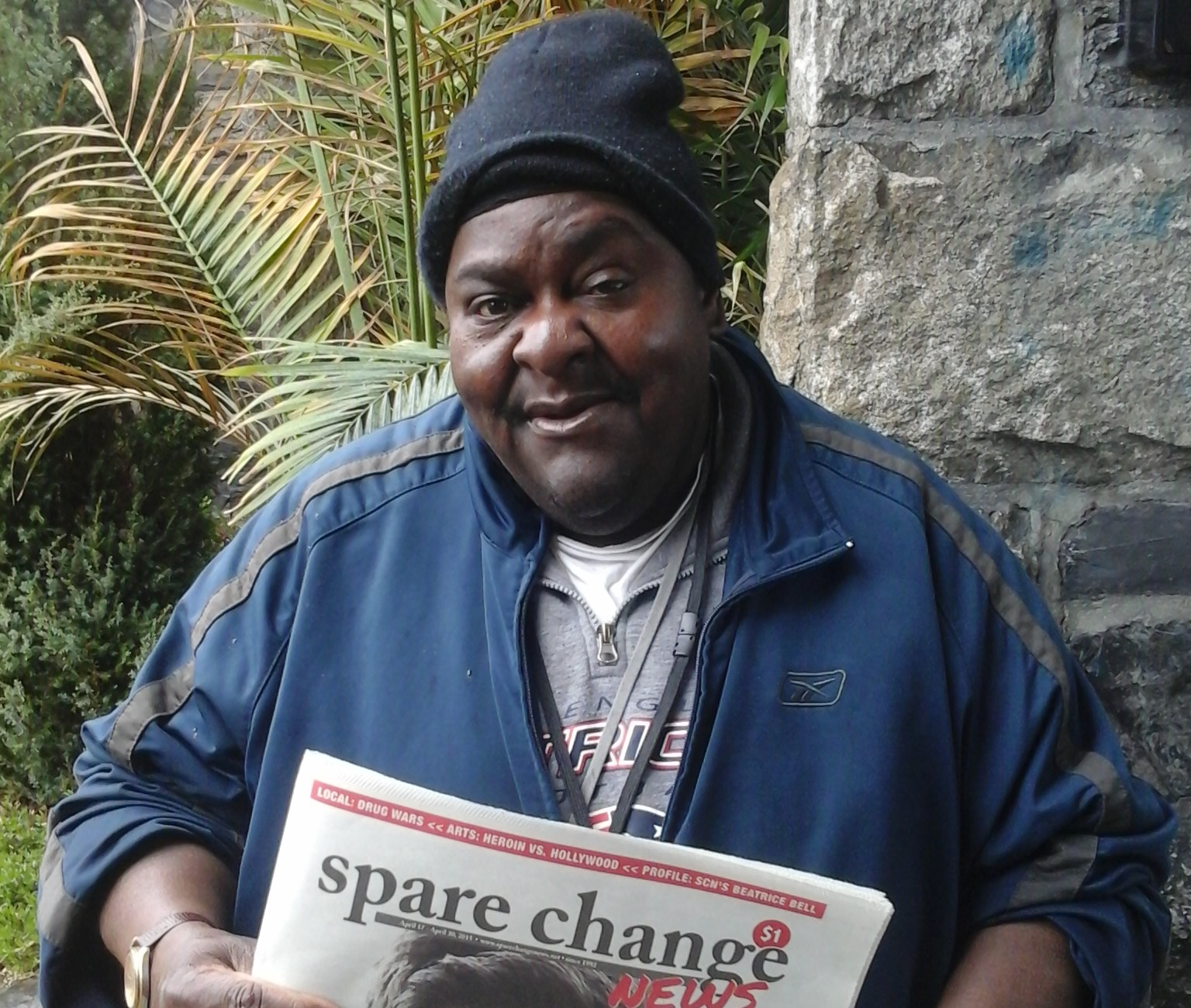 Larry Thomas sells Spare Change News in one of Boston’s most bustling spots: outside of the 7-Eleven on Washington Street in Downtown Crossing, across from the Old South Meeting House.

The downtown crowd is a colorful blend of Freedom Trail tourists, wealthy residents from the local high rises and groups of homeless people who mingle at the entrance to the State Street T. Larry joins a host of figures familiar to anyone who spends time downtown, like the tricorn-hatted tour guides and the lantern-carrying ghost guides. Like those performers, Larry does more than just stand around. He usually calls out to passersby to generate interest in the paper.

Amid this diversity, Larry finds that many of the people he speaks to are French and Italian tourists or Chinese people from nearby Chinatown. Many, if not most, of Larry’s customers are well off financially. “I find a lot of people live in the high rises,” he says. “People come from there and stop to get a paper. Most of my customers are wealthy. They’re just good people.”

During the winter, these regular customers often extend their generosity by giving him a double tip. After all, Downtown Crossing in wintertime is not the most hospitable place—the roads and sidewalks are covered in slush, and “beware of falling ice” signs are embedded in the snow—so Larry appreciates the extra kindness.

Sometimes, when the temperature drops below zero, the news vans come out to report on the weather conditions in the city and to see how Bostonians are coping with the cold. It was on one of these ultra-cold days that Larry found himself being interviewed on live TV by a Channel 7 news reporter. “It was just [the reporter] and I and a news camera. It was below zero,” he recalls with a smile.

When it gets that cold, the most common question people ask him is: “How can you do this?” A lot of people get to know him, he says, because he’s a cheery face on a cold winter’s day. “I leave them happy, they leave me happy,” he says.

Larry was born in Birmingham, Alabama, but his mother raised him in Boston and worked three jobs to provide for him. In 2005, after being homeless for a while and living with people he knew, he moved into Pine Street Inn and was there for about six years. “They treat you very well there,” he says.

One of the people who Larry remembers with fondness from that time is Lyndia Downie. She’s now the president and executive director of Pine Street. He says she helped him during his residence at the shelter and continues to invite him to join programs there like the food services training program, which prepares men and women for employment in the food-services industry.

When I ask Larry whom he most admires in the public eye, he thinks for a while and says, “Barack Obama… I like him because he seems like a level guy. He’s a laid-back president.” As for the president’s attempts to help immigrant families and his softening of relations with Cuba, Larry says: “He’s opening things up. That’s how it should be. He’s breaking the ice. He’s a caring president. He’s done things that have never been done before.”

Finally, I ask him if he’ll be voting for Hillary Clinton next year. “Probably,” he says. “I liked her husband.”