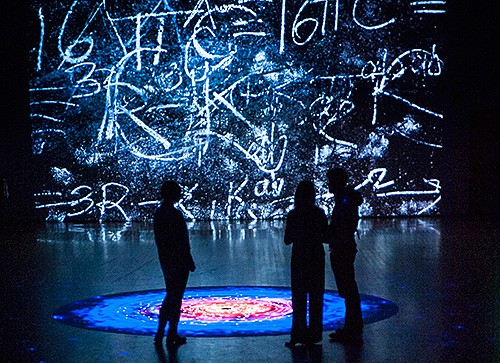 The creation of the universe was quite a job. Creating a play about it is no small feat, either.

Mr. g was adapted from the book of the same name by novelist and astrophysicist Alan Lightman. The play’s director, Wesley Savick, wrote the theatrical adaptation, a doubleheader of duties he also implemented with Lightman’s previous novel, the bestseller Einstein’s Dreams. The title-character of Mr. g (who’s never called god) is depicted as a hyperactive young man, a kid in Keds, who wakes up from a nap in the Void and decides to create time, space, matter, causality … a universe. He assumes that three dimensions will be enough. Avoids clutter.

Mr. g, playing through May 24 at the Central Square Theater, an Underground Railway Theater production, is one of several science-based plays co-produced since 2004 by the Catalyst Collaborative at MIT. The science is real enough to satisfy MIT types, and since it’s rendered with clarity, joy and wit, the rest of us won’t get lost.

There are four characters: Mr. g, his aunt and uncle and a neighbor girl. There’s no thematic reason for this. Mr. g himself may know all about quarks, but the play’s characters are all about quirk. Why is the genius boy sharing The Void with his aunt Penelope and Uncle Deva? Is God an orphan? Where does The Neighbor Girl come from and where does she go off to? What does she represent? The science in Mr. g may be clear, but many of the dramatic decisions remain fuzzy. Fortunately, the first half is chock full of small charms. It is, however, a frothy intellectual cocktail of an act waiting for a main course.

Luckily, all four actors are comic aces and the level of pure energy is adequate to the play’s big needs. As Mr. g, Jordan Ahnquist is a sparky genius kid whose idea-filled banter bubbles along. You might say he’s a young man high on life, but men and life haven’t been created yet. As the uncle and aunt, Vincent Ernest Siders and Obehi Janice are jovial, wry presences, Janice’s clownish antics really hitting the spot.

The script is chock full of nifty, brain-teasing ideas. In the first act, when his nephew’s new universe isn’t yet populated, the uncle sits at a table and reads a newspaper of blank pages. In the second act, after the universe’s inanimate life has accidentally animated, his newspaper is dense with words.

The problem lies in the lack of what we mortals refer to as real-life characters and emotional development. The neighbor girl, played with verve by Melissa Jesser, coyly flirts with Mr. g and stands so close to him that we feel a tad of sexual tension. Yet their rapport doesn’t grow and we never know what their relationship is about. The girl character takes the place of a more malevolent character called Belhor in the novel. Playwright Savick must have thought that some flirty chemistry might make this heady brew of a play more dramatic, but he didn’t go far enough.

Yet this brainy mixture of theoretical physics, ethical philosophy, religion and comedy is still consistently breezy and thought-provoking entertainment.

After an overlong first act, the second act finally makes this play work on an emotional level. Ghostlike video transmissions allow Mr. g and the neighbor girl to see and hear the human’s pain, suffering and fears of death. It effectively theatricalizes the notion of god’s channeling life on Earth. “I didn’t mean to make them suffer,” says a flummoxed Mr. g, yet all he can do to ease their pain is bestow upon them a glimpse of the Void and an enduring sense of mystery.

As a play, Mr. g has some problems. But, a bit like our universe, it’s a marvel that it works at all.