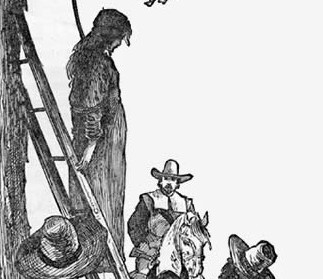 While the Salem witch trials of 1692 are the most famous witch trials to have occurred in colonial New England, people were tried and executed for witchcraft in other cities and at other times as well. Several women were unfortunately executed right here in Boston.

Usually people accused of witchcraft were poor and socially marginal, but Ann Hibbins, who was executed in Boston in 1656, was actually wealthy and socially well-connected. But like many other women charged for witchcraft she was outspoken and argumentative—character traits that Puritan patriarchs found threatening.

Ann Hibbins arrived in Boston in 1639 with her husband William. He came from a prominent English family and shortly after their arrival was appointed to Boston’s General Court, the legislative body in charge of the fledgling colony. They were quite wealthy. The Hibbins owned a house in Boston, a 300-acre farm called Standford on the banks of the Muddy River and other property as well. As important citizens they were soon invited to join Boston’s prestigious First Church.

Life seemed good but even wealthy people have their problems. William lost a significant amount of gold in a murky business deal and some Bostonians whispered that he had been involved in criminal activity. These accusations outraged Ann and she spoke out loudly against them. Ann became even more vocal a few years later when she accused a carpenter named John Crabtree of overcharging her for work done on one of their homes. When two other carpenters confirmed that Crabtree was asking a fair price she complained about them as well.

This type of behavior was considered inappropriate for a proper Puritan woman. The elders of the First Church held a hearing about the matter and determined that Ann was in the wrong. Although her husband urged her to admit her guilt, Ann remained unrepentant. The elders excommunicated her in February of 1641 for disobeying her husband and for refusing to concede she was wrong.

Church membership was important in early Boston. Ann’s reputation in Boston was permanently tarnished after her excommunication, but she was protected by her husband, who was well liked and had progressed in his political career. All that changed after he died in 1654. Shortly after his death she was charged with the crime of witchcraft and not even her wealth could protect her.

Oddly, no records remain outlining the evidence presented against her as a witch. If her trial was like other witchcraft trials, the evidence was most likely gossip, made up of unfortunate, random coincidences blamed on Hibbins. The actual evidence for black magic was unimportant. It was really her reputation as an argumentative woman that was on trial and there were plenty of people willing to testify about that.

Hibbins was found guilty of witchcraft and was hanged on June 19, 1656. Several of her late husband’s friends tried to intercede but they weren’t able to save her life. Tales of witchcraft can be spooky but I think the story of Ann Hibbins is scarier than anything supernatural.