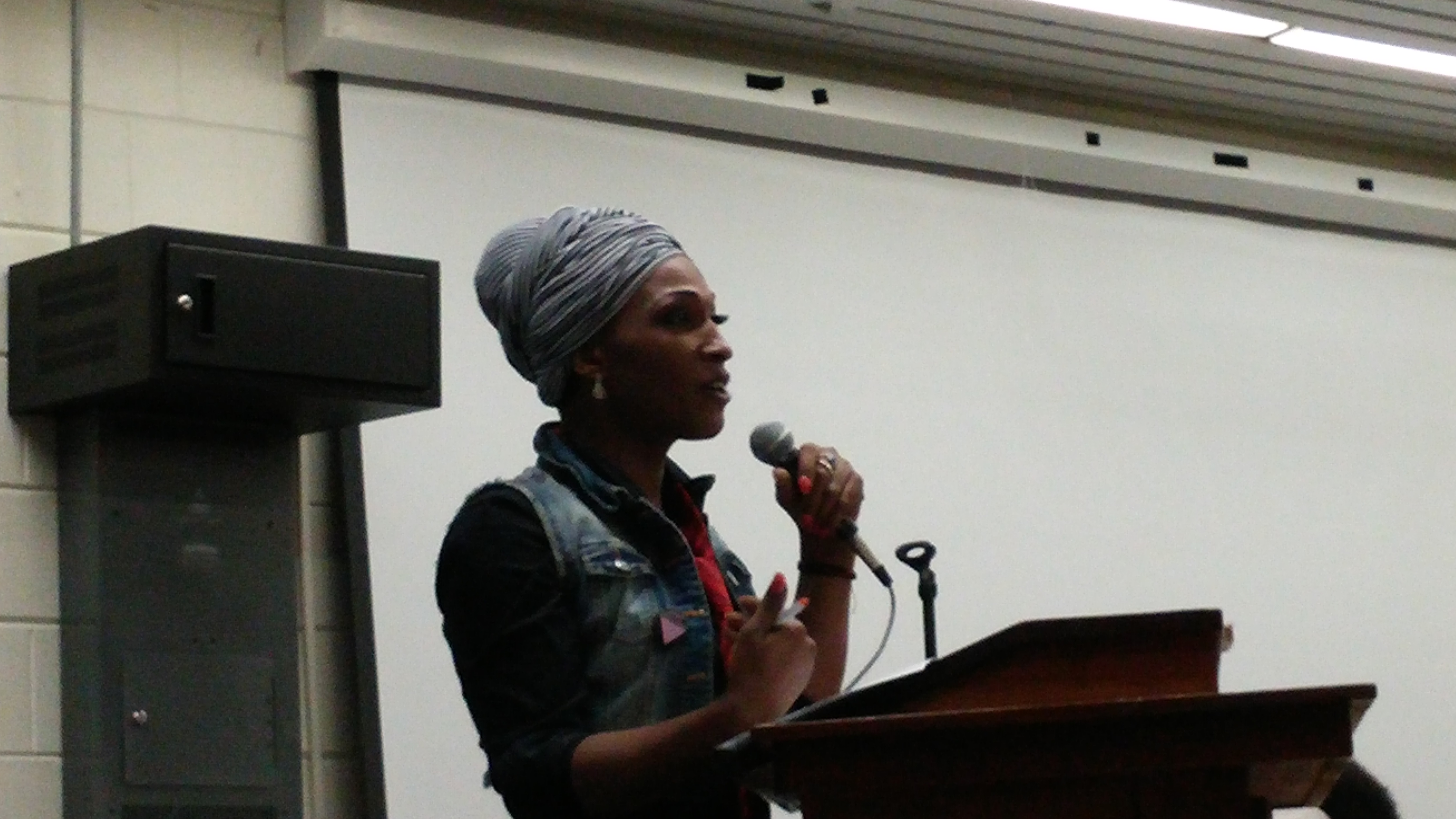 The police are targeting vulnerable communities, says Monica James. They’re targeting black people. Hispanics. Muslims. Immigrants. Women. Youth. The transgender community, all “people of difference.” It’s not really news to the audience at Roxbury’s Madison Park High School. After all, the panel is called “Baltimore is Everywhere,” and the speakers include victims of police violence and relatives of those killed by police.

But the words seem to carry a different weight when James speaks, possibly because she’s representing a community that often suffers abuse and brutality but rarely makes headlines.

James, a Chicago native, is here to highlight the unique police targeting and brutality she and other transgender women—especially trans women of color—endure around the country.

“I was targeted in 2007,” says James. That year found her in the maximum security division of Cook County jail in Chicago, awaiting trial, facing charges that could land her 28 to 80 years in prison.

By then, James was no stranger to the police or to prison. She told Windy City Times she had probably been in and out of lock-up over 100 times between 1989—when she first came out as transgender—and 2007. With no job, plagued by crack addiction, she turned to retail theft to survive.

Then one day, she was caught stealing at a department store. The employee who caught her asked her to just hand over the merchandise and never return to the store. But there was a plainclothes officer in the store, too, who decided James deserved a harsher punishment. He attempted to arrest James and started pistol-whipping her. James tried to fight back and the brawl spilled out onto Broadway. When she called for help, no passersby intervened. She says the officer’s gun went off during the scuffle, which led to an “attempted murder of a police officer” charge. A small army of cops was called to the scene.

Facing heavy charges, James started writing to every organization that could possibly help her cause. Many never responded. Then she heard back from Transformative Justice Law Project (TJLP) and attorney Owen Daniel-McCarter, who agreed to help her fight the case.

During the panel, James says she was also flooded with books and reading material that “challenged her cultural competence” while in jail. The book that stood out the most was Assata, the autobiography of Black Panther and activist Assata Shakur. Shakur, often considered a political prisoner, famously escaped prison in 1979 and fled to Cuba in 1984, where she was granted asylum.

“This woman was a walking target and a vessel of all types of pain and abuse that society directed towards people of color, people of difference and vulnerable communities like Hispanics,” says James. “The place of law enforcement is to scare these communities, keep them from standing up.”

Represented by Daniel-McCarter, her charges were reduced to aggravated battery and James was released in 2011. She took up speaking gigs and counseling jobs. Then, three years later, she was invited to Geneva, Switzerland to address three different United Nations committees about police brutality and prison abuses on behalf of TJLP.

“It was like my own Cinderella story,” James tells me. “It was super empowering … it’s one of the highest fields to advocate your cause.”

James says her message resonated with the UN because she spoke about prison and policing. “I spoke about the torture, and how the targeting and profiling is perpetuated because of a denial of access,” she says, “how no basic needs are met like housing or gender-affirming healthcare.”

Trans woman are often harassed, targeted as suspects of the sex trade and misgendered by police, correctional officers and inmates. Within prison, James also describes physical assault, food getting taken away, being denied showers and no access to gender-affirming healthcare.

James didn’t know much about Boston’s racial issues before her visit. “I thought Boston was above it all,” she says. Like many, she thought of Boston as a liberal beacon—great schools, smart kids, that whole image. Instead she was shocked by the segregation, reports of police misconduct and gentrification.

The panel was held on June 8, the same day that footage of the Boston Police Department and the FBI’s controversial shooting of terror suspect Usaama Rahim in Roslindale went public. James was also seated next to Clara Sheffield, the mother of Burrell “Bo” Ramsey, a young black man who was killed by Boston police in 2012. Boston is smaller than Chicago—different, less violent—but similarities exist, James notes, and they’re troubling.

“Chicago is so serious right now people call it ‘Chiraq,’ but today I have to step back and say Boston’s super serious,” she says. Especially disturbing for James is Boston’s rate of gentrification and rising rents. Gentrification is becoming a problem in Chicago, and James says: “If we don’t tighten up, we’ll be like Boston.”

For someone who regularly speaks on big, national issues and who has addressed the UN, James ultimately emphasizes a very local approach, citing personal connections and local community building as the keys to progress.

“I believe in reaching within your reach,” she says. Getting people to share space with people they don’t usually interact with is important, and getting people to engage with others, to bring up those uncomfortable conversations and discourses within their own circles, to invite people to panels and talks can make an impact.

Additionally, she says, people need to move away from “tokenizing” incidents or causes and notice issues in other areas and communities—“we need to get outraged at every single atrocious act.”

Oppression is “perpetrated in different ways. Each area is different and tricky. Tying it all together is huge,” she says.

Such community building, she says, “creates craft, creates [the] finesse” needed to fight systemic oppression. “People need people … In prison, I didn’t have anyone, I didn’t have a community.”

Now she belongs to a community of activists and gets to address other communities. While James certainly inspired many in that Roxbury auditorium, the local setting also had a big impact on her.
“Malcolm X, he treaded these grounds,” she notes. Madison Park’s even located on the boulevard named after the former Roxbury resident. “I feel like I’m standing on soil, doing some of the same things that greats like Malcolm X did. And for me that’s empowering. As a woman I was ruled out. I was told I never mattered … I’d never be anything. Well today, that’s totally different.”