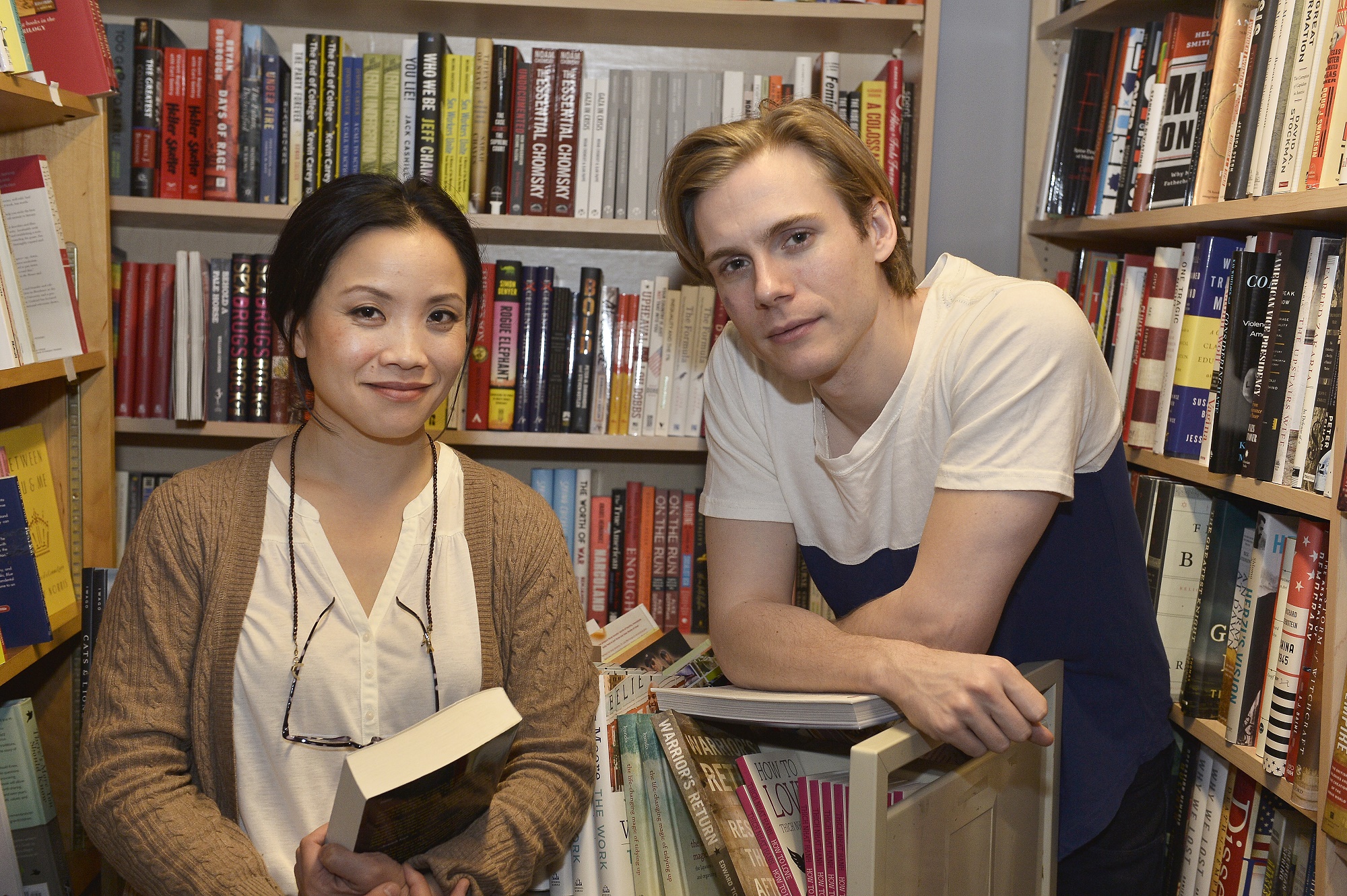 A play might be important, but that doesn’t mean it’s going to be effective. That’s the case with After All The Terrible Things I Do, a work by Midwestern playwright A. Rey Pamatmat. This two-character play cogently brings to the fore such issues as gay identity, self-loathing, parental pressure and bullying. While it does break some ground and contains several highly charged scenes, this is a play that often feels more like a series of thought-provoking speeches than a realistic drama.

The two characters are book-store owner Linda, who is short, middle-aged and Asian; and her assistant, Daniel, who is tall, blond, gay and a recent college grad. The time is now, in an “unremarkable Midwestern town” much like the playwright’s own Port Huron, Michigan.

This is a play dense with closely matching revelations. Let’s put it this way: while these two characters don’t end up discovering they’re blood relations, readers of Ross Macdonald mysteries or Charles Dickens novels will recognize we’re located deep down coincidence alley.

One thing playwright Pamatmat does well is move the time frame along. It is subtly evident that, with each successive conversation between Daniel and Linda, the relationship has deepened, time has passed and understandings have intensified. We learn that Daniel, played by Zachary Booth (FX’s Damages and the film Keep the Lights On) and Linda, played by New York stage actress Tina Chilip, have a lot more in common than a love of books and poetry.

It would be churlish of me to reveal any of the secrets that come out, since the play is all about a gradual reveal of past events. But I can say that the way in which gay children may react to cruel, homophobic parenting is one well-developed topic. Another theme: the manner in which victims can become bullies. One funny-shocking conversation between the pair is unusual in its detailed sexual frankness. A later scene adroitly explores the way S&M tastes may be connected to past adolescent bullying. Ultimately, both Daniel and Linda reveal their dark sides.

There might have been some masochism in the way Pamatmat constructed After All The Terrible Things I Did—he consistently chose to go down dangerously rough theatrical paths. A two-character play is so dreadfully hard to pull off. A play all about owning up to the past is so tough to make exciting in the theatrical present, especially when some of the story’s most important “characters” remain offstage. And finally, it takes the best actors in the world to pull off the amount of speechifying that hobbles Terrible Things.

Tina Chilip is weak. Enough said. Zachary Booth is a graceful actor with presence and future star appeal, yet he doesn’t quite capture the needed range of emotions. Moreover, as tall and good looking as he is, he isn’t the big, intimidating jock-type that the script describes. Who might have pulled it off? Imagine a young Heath Ledger or perhaps a young Philip Seymour Hoffman, but buff. Hoffman, in fact, often portrayed the multi-layered, brutish, guilty, confident, secretive persona that the part of Daniel calls for. A tall order. We don’t have to guess Daniel’s secrets before they pop out, but there needs to be a sense of mystery. From the start we need to be thinking: Who is this guy? Something is off, hidden, hurt.

When a play is as difficult to act as this one is, it might be the mark of a brilliant work like A Streetcar Named Desire. But in the present case, I think the writer just needs to cut the most long-winded, pretentious speeches and do a few more drafts.

Terrible Things runs through June 21, concurrent with Patmatmat’s earlier play, Edith Can Shoot Things and Hit Them, a quirky coming-of-age drama, which is being presented by Company One, until June 27. Both plays are at BCA’s Calderwood Pavilion.

Sharing
Tags A. Rey Pamatmat, after all the terrible things i do, company one, huntington theater, play reviews, theatre