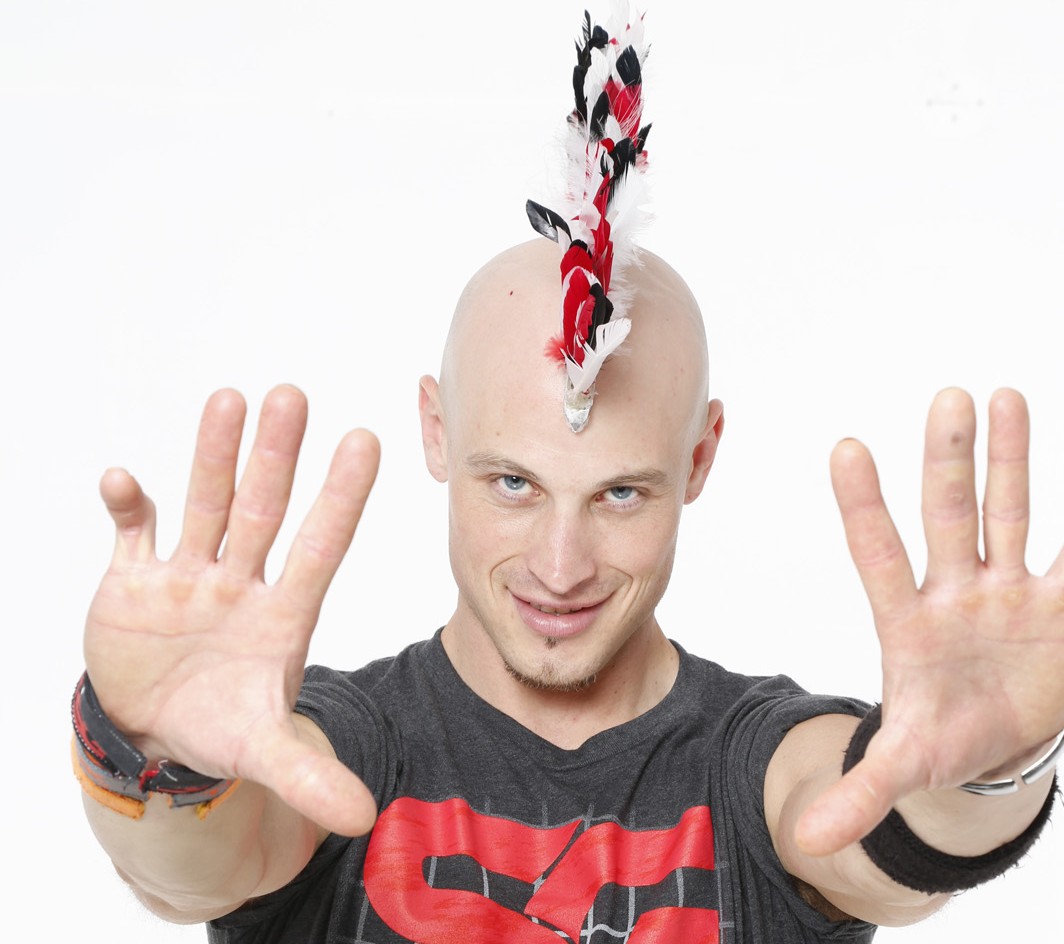 Travis “The Featherhawk” Snyder was chasing the dragon, a euphemism for heroin and opioid addiction, until he had enough. It was three days before Christmas in 2011 and he was sick and tired of being sick and tired.

He then did the unthinkable. Snyder stopped fighting and let go. It was at this moment of surrender that Snyder’s alter ego, The Featherhawk, took flight. He’s been sober ever since.

“My turning point happened while I was locked up during the worst part of my addiction,” he says at the launch party of the Boston-based recovery application called Sober Grid. “I was placed in a jail cell while being completely, mentally, physically and spiritually drained. I was so sick and so psychotic from withdrawal that all I could do was surrender and ask the God of my understanding for help.”

Snyder continues: “I opened my heart and mind to this incomprehensible energy and for the first time the light of change made its presence in my being.”

The Featherhawk, a persona with its own nom de guerre and feather mohawk, which Snyder adopted to represent his life in sobriety, decided to wear the tragedies of his past as armor not shackles. His advice to the thousands struggling with heroin and opioid addiction in Massachusetts? Don’t give up.

“My best advice for anyone looking to get clean and sober and enter a life of recovery is to first surrender everything they think they know about life, open their heart and ask for a higher power to show them the light of change,” he explains. “Learn what gratitude is, become grateful, learn what positivity is and become more positive and begin a spiritual program where they follow all the rules, embrace all the advice and work hard on themselves every single day.”

When Snyder talks about how to help other heroin addicts, it’s obvious he speaks from experience. “Always love them. You don’t have to love what they do, but find it in your heart to always love them,” he says when asked how our community can effectively slay the dragon.

“You will find that in almost every successful transformation that love from a family or friend is the defining factor and reason why a person was able to enter a life of recovery,” he says. “The most ineffective thing you can do is telling an addict what they should do, saying to them discouraging things, saying anything that will make them falsely resent you or saying anything that will make them feel unloved.”

Snyder continues: “The most effective thing you can do is to always tell an addict how what they are doing makes you feel. Nothing hits home more than hearing our loved ones tell us that what we are doing is hurting them in so many ways.”

The Featherhawk isn’t alone in his quest to help those struggling with heroin and opioid addictions.

More than 1,000 people died from heroin and other opioid overdoses last year in the Bay State. Approximately 600 deaths were confirmed and at least 408 are expected to be opioid-related overdoses, the highest ever recorded in our state.

Realizing that heroin and opioid addiction has become a full-blown crisis, enforcement organizations are starting to approach drug addiction as a disease and not a crime.

In Gloucester, police are helping addicts find treatment rather than arresting them. Spearheaded by police chief Leonard Campanello, the Angel Program pairs addicts with volunteers who will accompany them through treatment and recovery. “Gloucester is changing the conversation,” Campanello says in a release. “Police officers exist to help people. Drug addiction is a disease and drug addicts need help. The stigma associated with heroin and opiate addiction is over. Police officers are here to help you, not judge you.”

Campanello’s initiative is starting to spread to other cities affected by the scourge of heroin addiction. In fact, Arlington just launched a program called the Police Assisted Addiction and Recovery Initiative, or PAARI, and other cities are expected to join the fight. “In the past, we would not do anything with this information we learned about the customers of drug dealers and the addicts would simply find a new dealer for their next fix,” says Arlington’s police chief Frederick Ryan. “The time for inaction is over.”

Other organizations, like the Boston Warm Coalition, are advocating for more detox beds since the largest city-run shelter and its drug-treatment program neighbors closed on Oct. 8. “Several members of the Boston Warm Coalition have been planning to raise the volume on our call to Philadelphia Insurance to compensate addiction treatment providers who lost their facilities when the Long Island bridge was closed,” explains the Rev. Kate Layzer.

Boston Warm asked Jay Ash, the state’s secretary of housing and economic development, to investigate Philadelphia Insurance’s rejection of the claims. “That won us a meeting with Ash’s office and a visit from top brass from Philadelphia to reiterate that they would definitely not be paying out the claims,” explains Layzer. “They have also asked us to stop tweeting.”

Boston Warm’s the Rev. John Edgerton from Old South Church is taking the lead on a demonstration at Philadelphia Insurance’s regional office in West Bridgewater in the coming weeks.

“There will be sidewalk pickets, distribution of literature and possible arrests,” continues Layzer.

And then there is Hand Delivered Hope founded by Carol Anderson and a group of parents of addicts who said enough is enough. The group meets the last Sunday of every month and supplies food, clothing and toiletries to homeless addicts throughout Boston. At least one person in the group is trained to use NARCAN, a prescription drug that reverses the effects of an opioid overdose. The group formed soon after the Long Island Bridge closed in October.

Anderson, in a previous interview with Spare Change News, says “addicts are just wired differently to begin with.”

Once she realized the severity of her son’s disease, she invested everything she could to make sure her son got better. It wasn’t cheap, she says. Her insurance didn’t cover most of his treatment. Her insurance plan paid for two days, but what addict could get better in two days?

The Featherhawk, a 33-year-old recovering addict who has successfully launched his own clothing line, says addiction is a life-long battle he plans to take one day at a time. “I’m very grateful and thankful for this blessing to be able to share my experience, strength and hope,” Snyder says. “I have turned my life over by using all of my abilities, brands and businesses to support an underlying purpose of giving back and sharing all of my gained knowledge and wisdom with the world.”

Snyder, thanks to the support of his loved ones and recovery communities like the newly launched Sober Grid mobile phone app, says he was able to “slay the beast” once he accepted the nature of his disease and asked for help.

“The statistics say I should be dead, locked up, using drugs or in a rehab,” Snyder emotes. “Yet, here I am.”