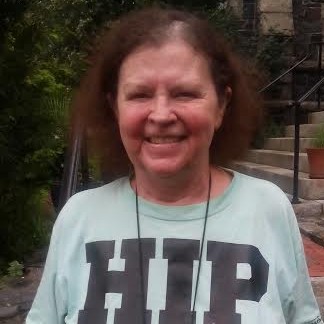 Living in Florida with her partner Walter, who’s also a vendor for Spare Change News, Barbara “Susan” Holden knew to avoid the cops on the last Friday of the month. “ID Friday” is what she’d call it, because that was the day the police would run their IDs, hoping they’d find a record so they could throw one of them in jail.

This wasn’t the only police-related problem she and Walter faced. One time, Susan drifted off to sleep on a park bench while waiting for Walter to finish shopping, and some police officers arrested her. They said she couldn’t sleep outside, but she’d literally only been asleep for a few minutes. That night, she was sleeping in a jail cell.

Susan believes that some of the problems they encountered in Hollywood, Florida, resulted from racism. Whereas Susan is white, Walter is black, and this made them a target of racist cops.

One time, they were coming out of a store with a pack of beer when three officers, who’d been standing outside with their arms folded, approached them and asked them what they had in their bag. Susan said it was some unopened beer cans. Straight away, one of the police officers took the cans, opened two of them and handed them back, saying: “Now you’re carrying two open beer cans, which is illegal.” When she questioned him, all he said was: “I’m Hollywood police, I can do whatever I want.”

Such open hostility toward homeless people finally drove Susan and Walter out of Florida. In 2002, they took a Greyhound bus to Boston and never looked back. Susan remains philosophical about her decision to leave, saying: “You can kiss my white, Irish you-know-what, Florida!”

When I ask her why she thinks the Florida police waste their time pestering homeless people, she says it’s because it’s easy. Rather than “going after the crack dealers who are all up along US1 between Fort Lauderdale and Aventura,” they pick on people—the homeless—who have nowhere to go. Living in Massachusetts is a whole lot better by comparison; in fact, she says she’s “never been bothered by a police officer here.”

Before moving to Florida, Susan was a music teacher and performer. She grew up outside Buffalo, New York, and studied music at SUNY Potsdam. Originally, she wanted to play drums, but back when she was in school, they wouldn’t let women do that so she opted for the French horn instead. In college, she joined a nine-piece rock group, and at the tender age of twenty, she opened for Sha Na Na. After graduating, she became a high school band director and dedicated herself to singing and playing piano. She cites Bonnie Raitt, Joni Mitchell and Linda Ronstadt as her biggest influences.

“I was supporting myself by performing in bars and restaurants [and in Florida, playing on the streets for tips] between 1979 and 2002,” she says.

In 2011, she appeared and sang in Jeff Schwartz’s documentary, Give Me a Shot of Anything, about health care for Boston’s homeless. She wrote and sang the song that plays over the movie’s end credits. If you want to hear Susan sing, check out the movie’s Facebook page for the full-length documentary.

I ask Susan if she has any closing thoughts for Last Word. She thinks for a moment and then says: “Being homeless stinks and it can happen to anyone. I used to have the stereotype that homeless people were drunks in a doorway sucking booze out of a bottle. I graduated from college and was voted the best instrumentalist in my class. You could never have told me I’d end up living on the street like a stray cat.”