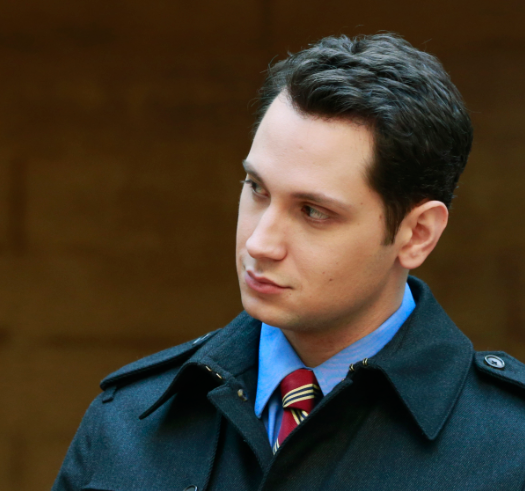 Matt McGorry, star of ABC’s How To Get Away With Murder and the Netflix original smash hit Orange Is The New Black, has made a splash in the celebrity advocacy scene over the last few months. The actor, an Emerson College graduate, continues to blaze the trail for many social justice causes. In fact, McGorry’s passion for social causes is matched only by his passion for acting in the eyes of his audience. It’s been a way of life for him since his early childhood growing up in New York.

“I’ve been performing for pretty much my whole life,” says McGorry. “I did some after-school theater programs growing up, and I think I did my first play in 5th grade in Cheaper by the Dozen, playing one of the kids.”

McGorry also spent time as a magician before realizing that acting was what he really wanted to do. “I became very interested in performing that way, doing shows at birthday parties, restaurants, but I eventually realized it was more of the performing that I liked than magic itself, and it helped me make a transition from that,” he says. “I guess there are two main points in my sort of adult life: going to a regular high school in my freshman year, then going to LaGuardia performing arts high school,” McGorry continues.

“I wasn’t sure if I wanted to put my eggs into that basket, then I made the switch after the audition in my sophomore year,” he explains.

McGorry had taken a break from acting to work on competitive bodybuilding, until refocusing on acting about five years ago. “I decided to buckle down and stop competing. I felt that that was the only way to make strides,” says McGorry.

McGorry has certainly made strides in his acting career since his decision to refocus, including his portrayal of Officer John Bennett in Orange Is The New Black and Asher Millstone in ABC’s award-winning series How To Get Away With Murder. However, he has also made a huge impact raising awareness about serious issues—for instance, his work with movements like the It’s On Us Campaign. McGorry identifies himself as a feminist and has been branded a male feminist by others.

“The term ‘male feminist’ shouldn’t even necessarily need to be a thing,” says McGorry. “If you’re a feminist, it shouldn’t matter what gender you are, it really just means people who believe in and support gender equality,” he continues. “I think the unfortunate state of the world and our society, is that it’s inherently disruptive when a man is interested in fighting for gender equality.

“I was essentially blind to this issue until about seven months ago, and I never fully understood that it was such a simple concept, and I think that it’s easy in a position of privilege to sort of be unaware of the things that go on around you,” says McGorry. “I think it’s easy to hear things and chalk it up to freak incidents … The more you delve into a subject, the more you realize that this sort of thing happens all the time,” McGorry says of gender inequality. “I’ve known people that make jokes that may have been a bit insensitive, but then you realize that people face these issues on a daily basis.

“As a male, you don’t have to think, when you have a date with someone, you don’t have to consider, ‘Am I safe in this situation? Can I be alone with this person? What restaurant do I pick so that I don’t feel like I could get sexually assaulted?’ and I feel that these are very real considerations that a lot of women have,” McGorry says.

McGorry, in addition to his strong support of gender equality, has also lent his time to raising awareness of the inequality and discrimination faced by the LGBT community, even after the Supreme Court’s ruling on marriage equality this past June.

“I think it goes the same way with all genders, like trans people,” McGorry says of gender discrimination. “We live in a society where people are very prone to bullying people they don’t understand, and when you think for a second, there are people who are trans who go through this every day in such enormous ways,” he continues. “It’s important to have compassion, and understand where people are coming from.”

“Women and non-males, we don’t have to necessarily ‘save’ them, but men do have to be a part of the conversation, the same way we need white folks to be in the conversation for Black Lives Matter and for other problems that people of color face in our country.”

McGorry also touched on the position that Hollywood feels it might have when it comes to discussing social issues, saying that some in his position “might feel judged” by what they say.

And even with everything he has to say about issues off-camera, McGorry is still excited for what the upcoming season of How To Get Away With Murder has in store for its viewers. He had a lot of praise for Shonda Rhimes, the show’s executive producer and Dartmouth alumni. He did mention a spoiler, but to keep the element of surprise intact, we will refrain from printing it.

“Having Shonda Rhimes’ name attached to the show was instantly attractive to me,” says McGorry. “She’s got such a strong track record of shows being successful, and I love that her casts are so diverse in gender and sexuality and race and, in some ways, very progressive for television,” he continues. “Being a part of that is great, and the character is so appealing.”

Along with his praise of Rhimes, McGorry shared some heartfelt feelings about his time in Boston, where he attended the theater program at Emerson College.

“I love Boston. Growing up in Manhattan, I wanted to leave New York City because I knew I would make my way back there,” McGorry reflects. “I wanted to go somewhere that was a new city, and I heard that Emerson had a great theater program and a great film program that was attached to it, so Boston seemed like the perfect fit, and I really enjoyed my experience there,” he continues. “It really is, especially while I was a college kid, a great place.”

McGorry has already accomplished so much in his young time in the limelight, and one thing is certain, in regards to advocacy: He’s a force to be reckoned with.

“It’s all sort of snowballed for me,” he concludes. “The more I put myself in the world, the more I’ve learned about it, and now I’m trying to educate my friends, fans, followers, and it’s all been quite a journey, continuing to be, for sure.”

The Season 2 premiere of How To Get Away With Murder airs on Thursday September 24, 10/9c on ABC.

Sharing
Tags feminism, how to get away with murder, matt mcgorry, orange is the new black