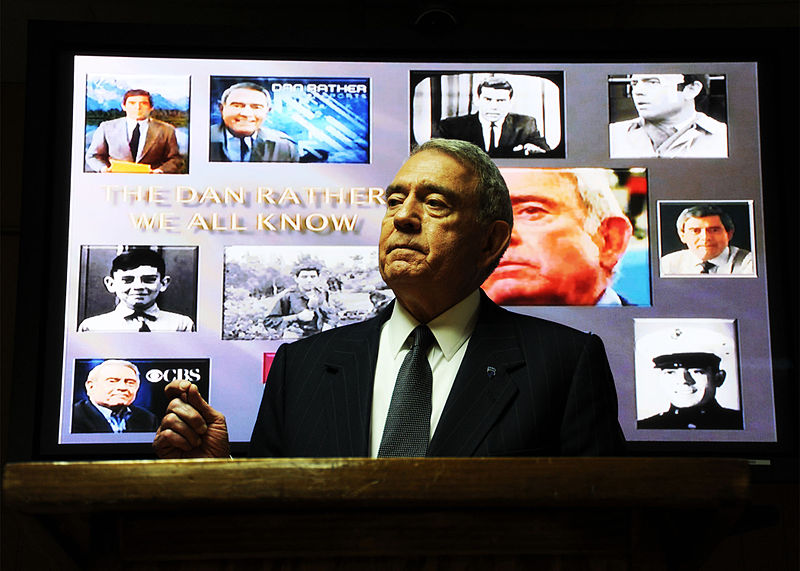 After more than 60 years in journalism, former CBS News anchor Dan Rather still believes that a free and independent press is the “red beating heart of freedom and democracy.” But news organizations aren’t living up to that standard, he says. Nor are they working hard enough to “give voice to the voiceless.”

Currently anchoring AXS TV’s The Big Interview, Rather is also about to come to a movie theatre near you. Or, at least, the story of his contentious breakup with CBS News in 2006 will be. Slated for a peak awards-season slot in October, Truth will star Robert Redford as Rather and Cate Blanchett as his CBS producer Mary Mapes. The movie examines CBS’s controversial report alleging that President Bush, running for reelection at the time, had relied on preferential treatment to avoid fighting in the Vietnam War.

The ensuing scandal saw Rather step down and Mapes fired. The veteran reporter—who has stared down Nixon, Fidel Castro, Saddam Hussein and Yasser Arafat – blames the rise of corporate interests in journalism for a slip in standards at his old employer.

Rather believes that news organizations need to provide better coverage of “the hungry, the homeless, the heartsick, the masses of people that are voiceless.”

Providing that voice has “been a constant motivator” throughout his career. But even from his position of power, he has not always been successful in increasing coverage of the homeless and impoverished.

“There’s not nearly enough of it, and what there is, is not nearly of high enough quality,” Rather says. “I think it’s important to note that I do not exclude myself from that criticism.”

Most reporters today lack the courage and determination to provide high quality coverage, Rather says. News organizations are frequently unwilling to invest in the high degree of investigative reporting that is necessary for such coverage.

“The business structure of journalism works strongly against it,” Rather says. “Finding the financing for deep-digging investigating reporting and first-class international reporting … it’s very difficult. And even if you are able to get the financing for it, [it’s difficult] to find anybody who will distribute it.

“Much of that has just evaporated.”

While the media looks away from issues of poverty and homelessness, entertainment coverage is booming. “You could find financing very easily to do something on the Kardashians or anything having to do with Hollywood and celebrity coverage,” Rather says. “And you could find widespread distribution for it.”

The shift in news from serious issues to fluff is, Rather believes, a threat to the very foundation of American life. When journalists and news organizations feel more pressure to make money than provide a public service, he says, “it is very dangerous in a society such as ours, which is a constitutional republic based on the principles of freedom and democracy … it can be lethal.

One of the results of news organizations’ unwillingness to invest in high quality investigative journalism has been a greater reliance on freelance journalists to cover international events and wars.

“Even the best of news organizations have become far too much news packagers, rather than news gatherers,” Rather says. “It’s much less expensive to say, ‘look we’ll close those bureaus and we’ll buy freelance coverage … it’s less expensive, and you stay out of trouble.”

“The sense of public service is what’s been drained out of a bunch of journalism of the last 25 to 30 years,” he adds.

Rather looks back to his days filing reports from the frontline in Vietnam and is disappointed that news organizations have become a lot less willing to challenge those in power.

“There’s more reluctance to question the powerful, to speak truth to power. There’s less of that now than there was, say, a quarter of a century or more ago,” he says.

“And by the way, all too often those people in the room shouting at one another have never been to those places.”

Journalists are also reluctant to ask hard questions closer to home—particularly about special-interest money in Congress and throughout Washington.

“While sporadically there is some coverage of it, there’s not the persistent, constant coverage,” Rather says.

Meanwhile, campaign contributions continue to rise. Rather estimates that they will hit $5 billion this presidential campaign. “Who’s going to give it? To whom are they going to give it? And what do they expect to get for it?”

For American journalists—and those around the world—Watergate remains a high watermark of the industry’s ability to hold the powerful to account. At the time, Rather was CBS News’ White House correspondent and was at the forefront of the coverage of the criminal scandal, which eventually toppled Nixon.

In his autobiography, Rather Outspoken: My Life in the News, Rather writes that prior to the break-in at the Democratic National Committee’s Watergate headquarters in Washington D.C., his house was broken into. Nothing was taken, but Rather’s files were rummaged through, and his family was warned by the wife of a Republican senator that the incident could have been politically motivated.

Two months later, the Watergate crisis detonated. Despite Rather’s unnerving experience, he reported the story and asked tough questions of the Nixon administration. He refused to be intimidated, but he doesn’t see himself as a courageous individual.

“I have no illusions of myself,” Rather says. “Overwhelmingly, most of the time I haven’t been as courageous as I should have been.”

Rather worked at CBS News for more than four decades, but in 2004 he began to notice an ominous change in the culture of the network. He and his colleagues were in the process of breaking the story of U.S. military officials committing human rights violations against detainees at Abu Ghraib Prison in Iraq.

“It was a very difficult story to cover, one of those stories that I found myself in the early stages saying, ‘I hope [we] get told that this is not true,’” Rather says. “But developing that story and trying to get the story on the air, for the first time in my time at CBS, I began to say to myself, ‘something has changed here.’

“This was by any objective analysis, a major story. To have a worldwide break on that kind of story, what news organization would pause?

Unfortunately, Rather says, William Paley no longer owned CBS. Sumner Redstone had taken over the organization when it merged with Viacom in 2000 and his news philosophy was very different than that of Murrow, Paley … and Rather.

“We eventually got the Abu Ghraib story on the air because some of our sources began to say, ‘listen, if you’re not going to run it, we’ll go elsewhere,” Rather says. “But then, very quickly behind that, came the Bush National Guard story.”

And with it, the end of Rather’s time at CBS News.

Rather’s story alleged that President George W. Bush used his father’s influence as a prominent Texas congressman to get him placed into a “champagne unit” in order to avoid combat during the Vietnam War, only to go AWOL from the unit for about a year with no explanation. The story ran in September 2004 in the midst of a heated presidential campaign between Bush and Massachusetts Senator John F. Kerry (who had been a Navy speedboat captain on the Mekong Delta).

The story exploded. Accusations were made that the documents Rather had used were forged, and his source later admitted that he lied to him. While Rather says that all of the other evidence he used still supported the facts he reported, he apologized on the air.

A year after reporting the story, he announced his retirement from CBS News, departing the network in 2005. He had been their anchor for 24 years. He later sued Viacom and CBS News executives, alleging that they made him the scapegoat in the Bush National Guard story, but his case was dismissed.

Rather says that in the case of the Bush Air National Guard story, CBS abandoned its long-held tradition of defending their reporters and their work and left him out to dry.

“The history and tradition of CBS News is that it stood behind its reporters and their stories,” Rather says. “Murrow with [Joseph] McCarthy, Murrow and smoking, Murrow and Harvest of Shame: these are stories that gave the corporate side of the network difficulty, but the point is, they may not have liked them, but they backed them.

“Coverage of the civil rights movement, coverage of the Vietnam War, the Watergate period … It was the history and the tradition,” Rather says. “It was what made CBS News the great worldwide news organization.”

Despite everything that happened, Rather says the basic facts of the Bush story were accurate and that he still stands by the story today.

“I made a mistake; I make a lot of mistakes, [but] the Bush story was true.”

Ahead of the release of Truth, the movie that tells the story of his downfall, Rather says things may have ended differently had he seen the way the wind was blowing sooner. “I didn’t recognize it soon enough, I didn’t recognize the depths of it soon enough. And when it came time to respond to it, in the wake of the Abu Ghraib and the Bush story, I wasn’t quick enough, smart enough or good enough to mount the kind of response that might have headed it off.”

The film is based on the memoir of former 60 Minutes Producer Mary Mapes, Truth and Duty: The Press, the President, and the Privilege of Power. For fans of heroic liberal journalists kicking against the system, the casting of Redford will recall the classic film of the Watergate affair, 1976’s All the President’s Men, in which Redford starred as Bob Woodward and Dustin Hoffman was Carl Bernstein. Having spoken to the dashing Redford about the film, Rather told the New York Post that the casting has made him feel “humble.”

All the President’s Men was the inspiration for thousands of young people to become investigative journalists, to follow in the footsteps of The Washington Post’s courageous Woodward and Bernstein. It remains to be seen whether Truth can similarly help reinvigorate the industry that Rather loves.

Whatever the response to the movie, Rather has already distinguished himself as one of the most influential journalists of our time. “I enjoy a great deal about what I do,” he says. “I have a passion for work. I have a lot of flaws, and may have made mistakes, but I have a great passion for covering news.”