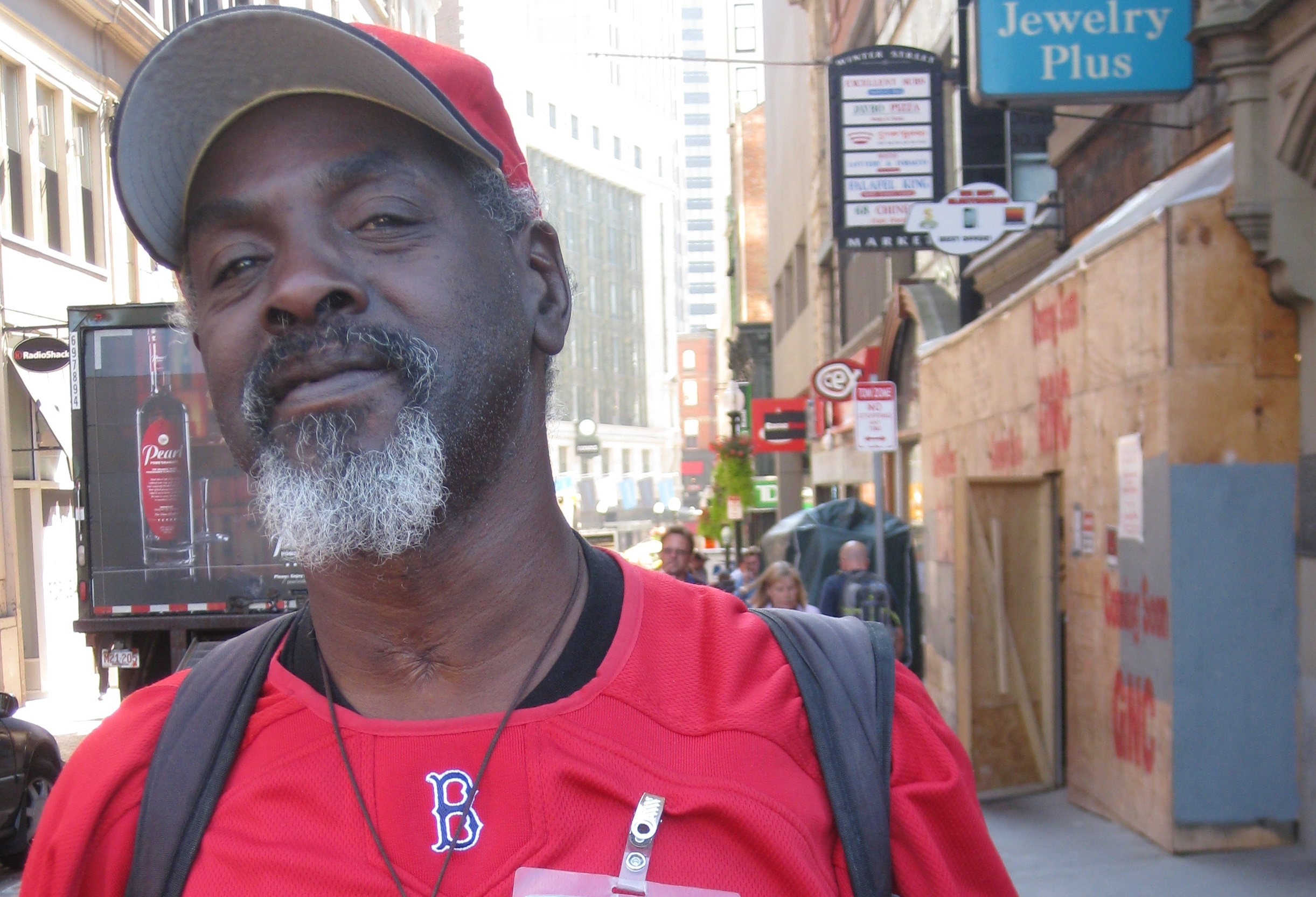 Next time you’re downtown during the day, look out for Spare Change News vendor Charles. You’ll find him on Tremont Street between Downtown Crossing and Park Street T station. I met him on a fine fall day earlier this month and took him for a stroll through the Common to talk about his experience of working for Spare Change News—and his thoughts on life in general.

“It was good for me, real good for me,” he says about growing up in Roxbury with his many siblings. He quickly adds: “I was homeless when I was thirteen. I was bouncing in and out of places—whoever I could stay with. [My] household wasn’t what it was supposed to be. Then I got introduced to substances. By the grace of God, I’ve come this far in love. You take the good with the bad.”

Reflecting on his own experiences of being homeless at such a young age, Charles has many things to say to young homeless people today, particularly about the importance of getting help. Although he wants to say “don’t drink and drug” to youngsters, he knows they have to experience the problem before they can understand it for themselves.

He says: “You got young folks today. They’re experiencing being homeless and think it’s all about drinking and drugging, but they don’t know what it’s all about. You have to adapt and use the programs that are around or you’ll drown.”

Charles himself has benefitted from the help of Pine Street and other programs. He says: “Some people just want a bed and something to eat, but you have to take advantage of what’s on offer.”

As a young man, Charles often relied on the kindness of his “three or four girlfriends,” who would give him somewhere to stay during the week and let him take a shower. Things were harder at the weekends: “Saturdays and Sundays were the worst time for being homeless cos there’s nothing to do.”

Charles had a son at the age of 16. He describes his son as a “good kid,” adding: “It was tough being a young parent. It limited me from doing what I had to do sometimes. It wasn’t peaches and cream.”

During his early adult years, Charles went to Job Corps and later trained as a welder. For a while, he worked for General Dynamics, and when they shut down, he worked at a steel works in South Boston. This was during the 1970s, and Charles points out that Boston back then wasn’t as liberal as it is today: “There was a lot of racists over there [in South Boston]. They didn’t want people taking their jobs.”

The unionized workers in South Boston were unhappy about an African American man coming to work with them, especially as Charles wasn’t yet part of the union. The problem went further than just a few workers, however. Boston in the 1970s was an incredibly racist and segregated place, and Charles was used to hearing black people being called “moolies,” a racial slur derived from a word for “eggplant.”

“Back then, I’m being honest with you,” says Charles, “blacks were hardly allowed in South Boston. [You were] always looking over your shoulder all the time [in case] they’d drop something down.”

As for the racist insults, Charles shrugs them off. “Talking is cheap,” he says—but if anyone laid a hand on him, that was another matter.

After many years of homelessness, Charles’ life today is good. “I don’t consider myself successful,” he says, “but I’m happy. I’ve got a life, my health and strength. God is in my life. I eat a meal every day. I’m just grateful to be alive … In the projects, all the people would say me and my brother wouldn’t live past 16. But here I am, I’m 58 and I’m still here. I’m thinking God has a plan for me.”

Charles has been asked to join the board of Spare Change News and is currently contemplating it. However, he has mixed feelings. He doesn’t believe the board is that “in touch” with homeless people’s lives. Of course, some members of the board have been homeless, but as he points out: “Most… have never even been homeless. Unless you’ve experienced homelessness, you can’t relate to me.”