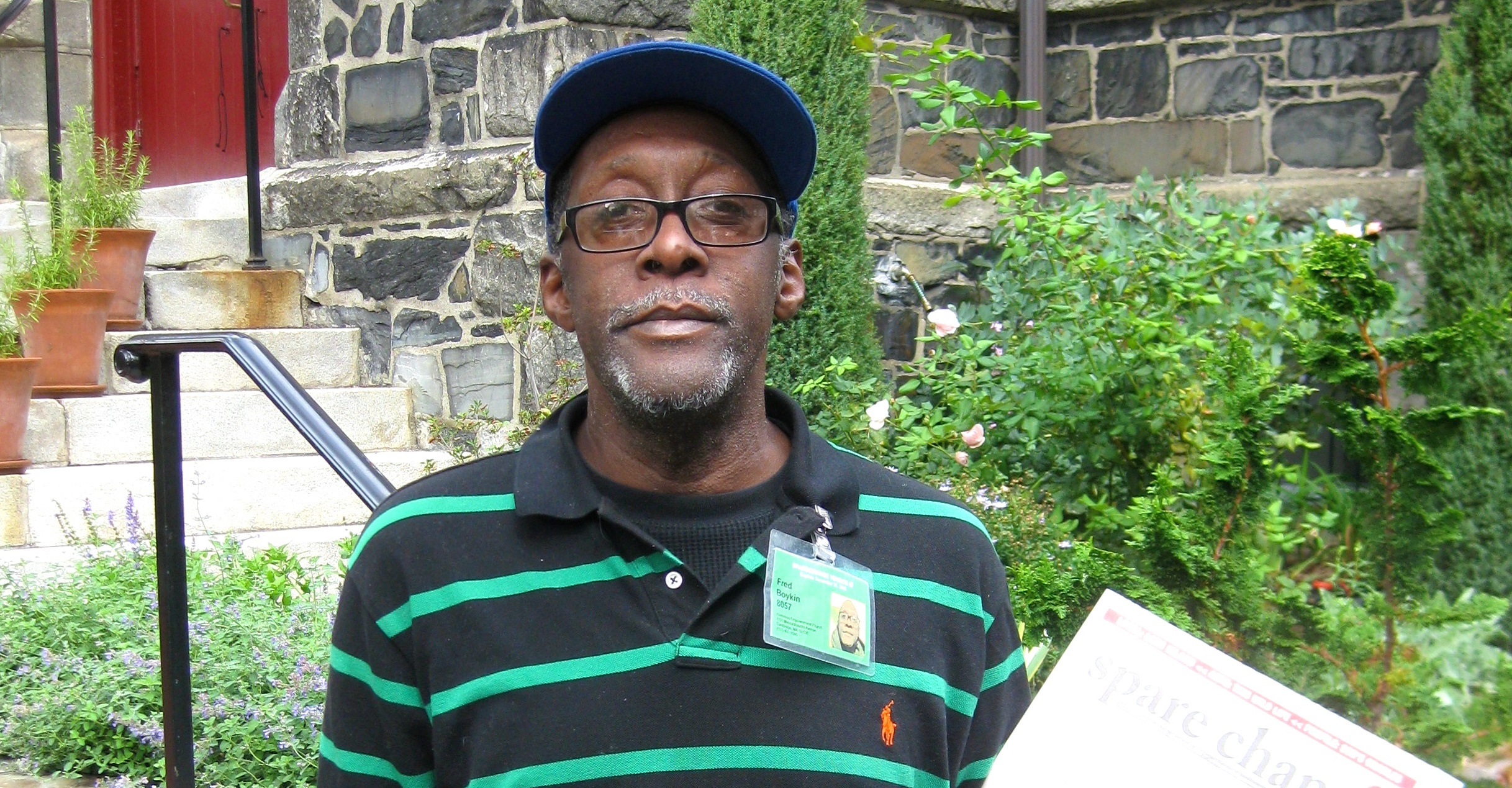 For the first 30 years of his life, Fred Boykin lived securely in the same Dorchester house owned by his mother.

His mother was the treasurer of Emmanuel Holy Christian Church in Roxbury and was a strict parent who always made sure Fred came home for dinner at the same time. He remembers her voice resonating through the neighborhood, calling him home.

Fred went to church till he was 18 years old and people teased him for carrying on. It’s not surprising, really—Fred comes from a mystical family. He remembers his grandmother, who lived in North Carolina, praying, laying her hands on people and healing them of their illnesses.

He also speaks fondly of the food she gave them when they went down to visit: thick bacon, grits, eggs and homemade biscuits.

“She was like six-foot-two and her voice carried like mine,” says Fred. “[Like her,] people always recognize my voice ’cause it’s so heavy and baritone. I can’t whisper. People say, ‘Lower your voice.’”

It’s the loudness of Fred’s voice that helps him sell papers—as well as his ability to invent ear-catching slogans.

“I make up slogans like ‘Two for one,’” he says. “You get vitamin D from the sun and knowledge from the paper. You get two for one for only a dollar.”

Tragedy struck Fred’s life when he was 30 years old. After his mother died, she left him the house, and sadly, it burned down in an accident.

“I had two rooms rented out,” Fred recalls. “One guy went to work and left the heater on. When I opened the door, black smoke hit me in the eye. I got everyone out … I lost the house and there was no insurance because one side of the house was boarded. I lost everything.”

Fred has been homeless ever since, moving from one apartment to another and in and out of shelters. Until he was 30, he never understood people saying it was normal to move three times in a lifetime. When his house burned down, he “realized it’s true what they say… When I became homeless, I moved like 30 times.”

Having to move around all the time is bad news for Fred: he’s got a bad leg and has glaucoma, which makes him blind. More than anything he’d just like a permanent roof over his head and “enough money to do what [he] wants to do.”

“I have nerve damage and I’m blind,” he says. “People used to think I was clumsy. Now they realize I’m blind. When the pressure’s high in my eyes, I don’t see, but when it’s low, I can see. One time I used to walk into walls.”

Despite these difficulties, Fred appreciates his customers and friends, who often check up on him and make sure he’s okay: “I have nice customers who buy the paper and who see if I need anything, something to eat. But it’s hard. It’s hard to get out here to get the papers,” he says.

Fred sees life—both the physical and the spiritual—in terms of circles.

“We live in circles,” he says. “We live on a sphere—the earth—and we’re born in the womb, which is a [kind of] circle. We travel in a circle and we go up and down like on a merry-go-round. Even when you’re playing baseball, you’re in a circle.”

I ask Fred if there’s any way of getting away from circles.

“When you die, you go into a different circle, a circle of peace,” he says. “Out here, there are lots of circles of drama. Those are circles you don’t wanna be in.”

He explains the idea of life being like a circle by referring to Martin Luther King, Jr., who knew he was about to leave his circle, says Fred, because he’d achieved everything he needed to achieve.

When Fred and I say goodbye, we laugh, realizing that he’s on his way to one circle and I’m on my way to another.