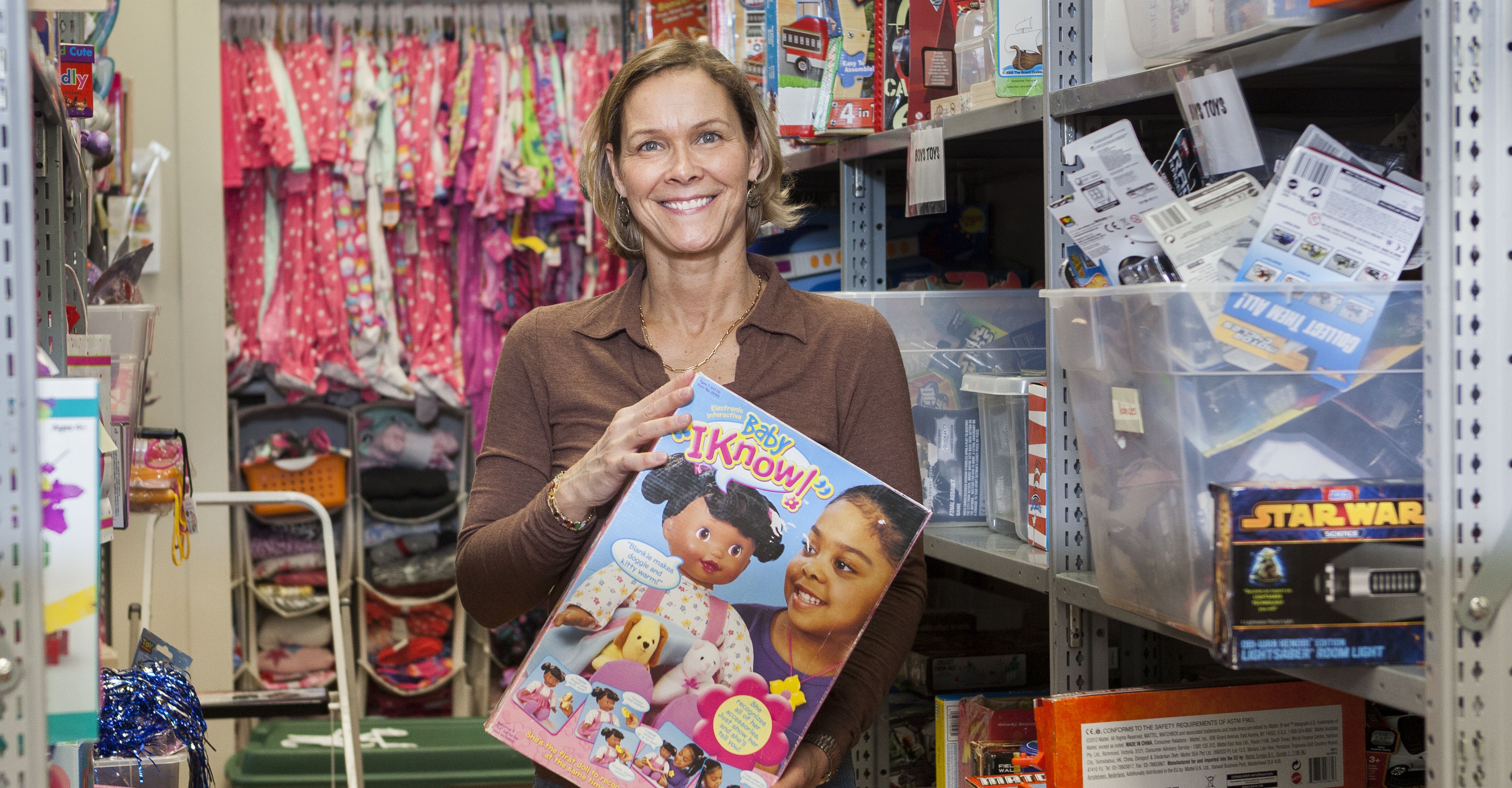 All photos by Alena Kuzub

The presents start at the bottom of the stairs at Episcopal Trinity Church in Newton Centre. Stacks of gift bags, brightly wrapped packages, and cardboard boxes filled with toys wind their way up from the lobby to the second floor of the church, letting anyone who may have been confused know that, yes, you are nearing Birthday Wishes headquarters.

Birthday Wishes, founded in 2002 by Vasiloff and co-founders Karen Yahara and Carol Zwanger, is a nonprofit organization with a very straightforward mission: to bring the joy of a birthday party to children living in homeless shelters.

What started as a family project geared toward giving Vasiloff, Yahara and Zwanger an opportunity to introduce their children to community service and volunteering has since sprouted into a multistate organization with regional offices in Newton Centre, Northborough, Massachusetts, South Hadley, Massachusetts, Woburn, Pawtucket, Rhode Island and Long Island.

“It was clear that this couldn’t be just a hobby for me … but I never imagined it would become what it is,” Vasiloff said.

With 11 paid employees and a network of nearly 500 active volunteers, Birthday Wishes works with over 200 shelters and transitional-living facilities in the three states. In total, 34,000 children living in shelters will have attended a Birthday Wishes birthday party by the end of the year.

The idea, as signs around the Newton Centre office remind volunteers, is simple: birthdays equal joy. And joy diminishes trauma.

Every month the shelters that partner with Birthday Wishes send the organization a list with the names, ages and genders of resident children whose birthdays fall in that month. With that list in hand, Birthday Wishes party coordinators start planning.

All items used for birthday parties are donated either by individual donors or local organizations, like Girl Scout troops and churches who sponsor toy drives for Birthday Wishes.

“Cakes can be a bit of a problem,” Vasiloff said. “We can’t just keep those in our office.”

But donated cakes come from all over, too, be it from someone baking at home, a restaurant or bakery sending extra product or baking specifically for the party.

“You’d be surprised at the number of CEOs and VPs who are actually fabulous cake decorators,” said Vasiloff.

The Birthday Wishes model is based in simplicity—the idea that you don’t have to have a lot of money or even a big space to have a really enjoyable time and give children a memorable celebration. Every party is set up with decorations, balloons, music, cake, arts and crafts, a game or activity and, of course, presents.

“Each child celebrating a birthday gets about four gifts and every one attending gets a goody bag—it’s important that everyone is given something at the party,” Vasiloff said.

Equality is at the forefront of every volunteer’s mind when it comes to planning and executing a Birthday Wishes party. Jill Glazer, who started volunteering with Birthday Wishes in 2010, works to make sure every goody bag has the same toys and same number of pieces of candy and other goodies.

“We joke and call me head of Quality Control,” Glazer said. “But consistency is key—when you give your own kid a party you would never not give everyone the same thing … everyone should be included.”

That sentiment, that everyone should be included, sits at the heart of Birthday Wishes’ mission.

“It’s really important that [the children living in a shelter or transitional housing] be able to maintain the normalcy of being kids,” said Risa Mednick, executive director of Transition House, a Cambridge-based shelter for women and children escaping domestic violence that has been working with Birthday Wishes for a number of years.

“Birthday parties are certainly a part of that, and what Birthday Wishes creates is a festive celebration of children, of their birthdays and their lives,” she said.

According to the Massachusetts Coalition for the Homeless, roughly 4,300 families with children and pregnant women were in the Massachusetts Emergency Assistance shelter program as of June 2015. Nearly a third of those families were housed in hotels or motels.

“These kids live very dark, scary lives,” Vasiloff said. They’re surrounded by the repercussions of substance abuse, domestic violence; and they’re not living in safe, warm environments. When people think about basic needs, a birthday party sounds small, but those small bursts of joy are important, she said.

So important, in fact, that this year Birthday Wishes has hired the Center for Social Innovation at Boston College’s graduate school of social work to perform a social impact study of the Birthday Wishes program. While the study won’t be released until February, Birthday Wishes staff eagerly awaits the results.

“At the end of the party, when people are finishing up the cake and the kids are opening their presents—these are times that are really rare in these congregate shelters. You have women facing a million challenges and kids growing up in difficult surroundings, but at the parties everyone comes. People can kind of forget about … all the other stuff for a while,” Vasiloff said.

“We know so clearly that this makes a difference,” she said.