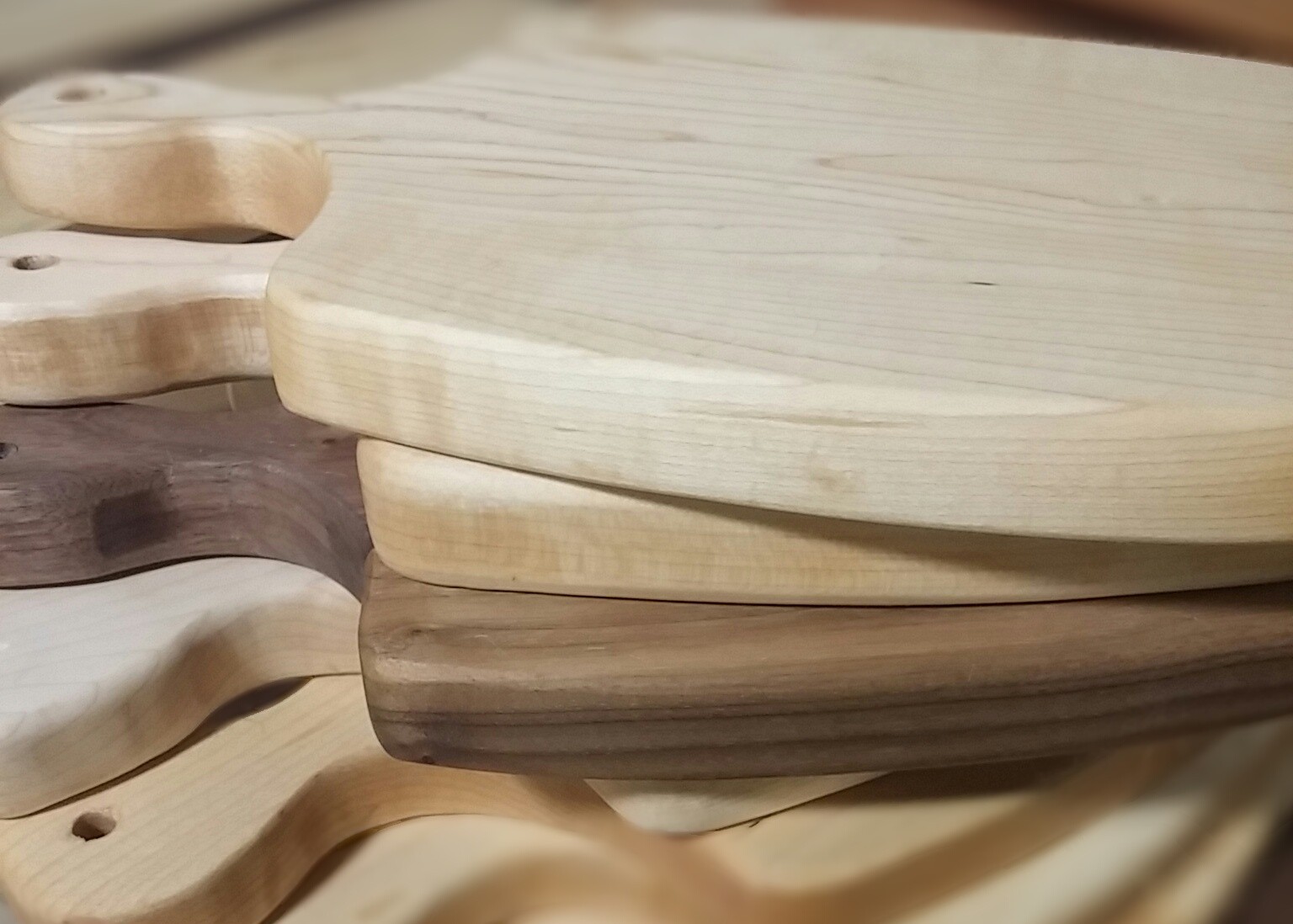 Idle hands are the devil’s workshop, as the saying goes. And while the phrase was probably crafted as commentary about the proclivity for young children to stick things into electrical sockets or come up with fresh ways to torment a sibling, on the northwest outskirts of Franklin Park, along a stretch of Washington Street peppered with the innocuous commercial ephemera of Jamaica Plain’s denizens, on any given weekday, a workshop helmed by those who benefit the most from even the most basic daily structure are using previously idle hands to create stellar projects out of pieces of wood at Boston HandyWorks.

Branded as the Pine Street Inn’s “social enterprise” arm, the program is both a working commercial wood crafting center as well as a soft-skills educational initiative for hiring and training people transitioning out of homelessness.

The program’s current director, Annie Moore, took over the position after its founder Nick Pieri left a few months back after launching its early incarnation back in 2009. Under Pieri the program grew out of a woodworking hobby and found its legs at the men’s shelter on Long Island, which closed in October of 2014 due to concerns about the structural decay of the Long Island bridge.

But what started out as a therapeutic process—more about making bird houses and doing crafts just to occupy the minds of the shelter’s residents—grew into a revenue source for the Pine Street Inn, with the money going back into the budget for the program.

“It was more about learning a trade, less formalized as a business as it is now. They weren’t selling [the products],” says Moore. “Then it developed into this shop where we are now producing thousands of [products] every year.”

Trainees initially enter the program for up to six months and are mostly able to work with employment counselors from Pine Street, who offer general aid to re-enter the workforce. But what the program really provides, according to Moore, is something less tangible and more valuable for people who’ve experienced hardship and who are working to get back on their feet: self-worth. 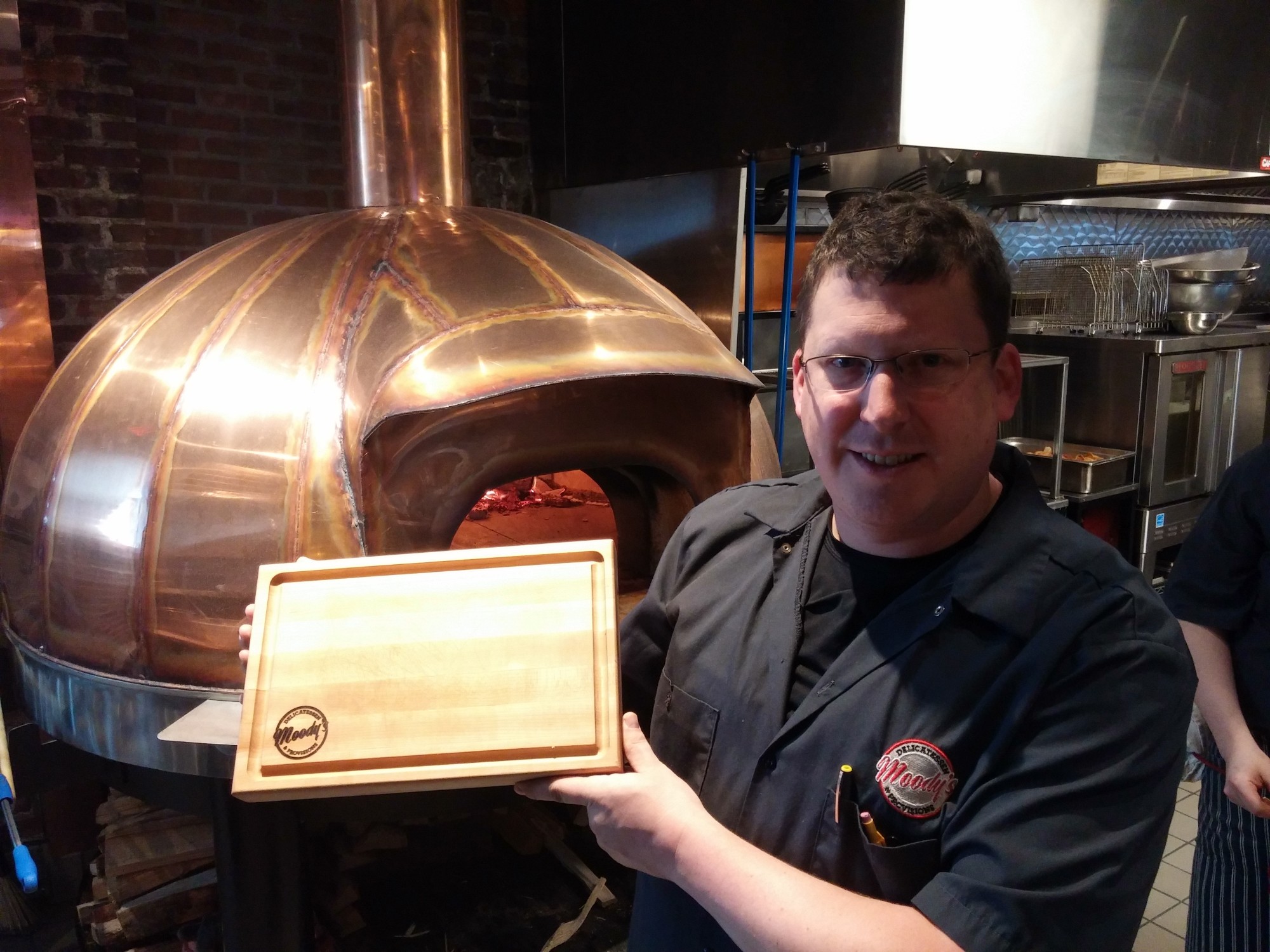 “In the shop, they’re learning real equipment and machinery, and working with intricate computer programming for the machines,” said Moore. “[But] achieving something over the course of a day, working on a team, [learning] professionalism, showing up on time, taking responsibility for something, using your hands … [it creates] a feeling of pride and a feeling they may not have in their day to day.”

According to the HandyWorks website, 100% of the program’s participants are people who have been homeless in the past year. Of the 86% of people who graduated from the program since 2009, 21% transitioned into permanent housing, while 52% became employed or found work in a paid internship.

Moore said that some of the people who come through the door are referred from other agencies or move from within the various correctional institutions in the region. But everyone is trained in-house and works in tandem to create professional-grade cutting boards, unique wood products and gifts. Think knick knacks crafted from a mish-mash of cut pieces, chunks, wedges, and general scrap wood left over from the creation of larger projects (“Helps limit waste,” said Moore).

Additionally, the shop is producing custom wood knife boxes for R. Murphy Knives, an Ayer, Massachusetts, knife maker known for high-end cutlery and oyster knifes. The program also recently teamed up with an architect in Acton, Massachusetts, who was impressed with the project’s ethos overall and who is funding production of “Blox in a Box,” a collection of simple, small wooden toys.

However, the central focus continues to be on the boards and blocks. In the last few years, the work has been enthusiastically embraced by local chefs and restaurant groups, both for the aesthetic moxie of the products and the core message of the program, which continues to win over new fans.

Cheforward, an Arizona foodservice-industry product-supply company, which launched in 2015, has since secured national restaurant distribution rights for the culinary boards to sell them in restaurants. It recently ordered around 1,700 boards. Co-founder David Richman says that after discovering the program, he and his wife (and co-owner) knew this was precisely the kind of non-profit they were looking to partner with.

“I met these people and there was sheer desire, it wasn’t a job to them,” Richman says. “It was about getting their life back in order.” He notes that for his new business, he could have easily placed orders for similar products made cheaply overseas, but for him, life isn’t about that.

“Life is about how we can help people,” he said. “And everyone deserves a second or even a third chance… as long as they really want it.”

Mark Goldberg, culinary director of the Grafton Group—20 year veterans of the Hub’s culinary scene with four popular Harvard Square restaurants—said that in preparation for the opening of their brand new rustic watering hole (a nod to the fisherman and brawny tradesman taverns of old) on Long Wharf in Boston, they turned to HandyWorks while assembling their design vision for the new project.

“We worked with them to develop the size and shape and color of the boards we were looking for,” Goldberg says. Together, they developed over 60 custom units from live-edge boards in ash and birch to round butcher-block boards in maple and cherry wood and even wood underliners for holding side dishes served in sizzling cast-iron skillets. (According to Moore, a portion of the raw live-edge wood Boston HandyWorks sources is purchased from a man in North Reading, Massachusetts, who drives around and picks up fallen trees for people and mills them right on the back of his truck. Talk about locally sourced.)

“We’re big into using local whenever we can,” Goldberg said. “[But] on top of being local, their program of reclaiming lives is awesome. I love that aspect of it.” He added: “And it’s a beautiful piece of handiwork.” 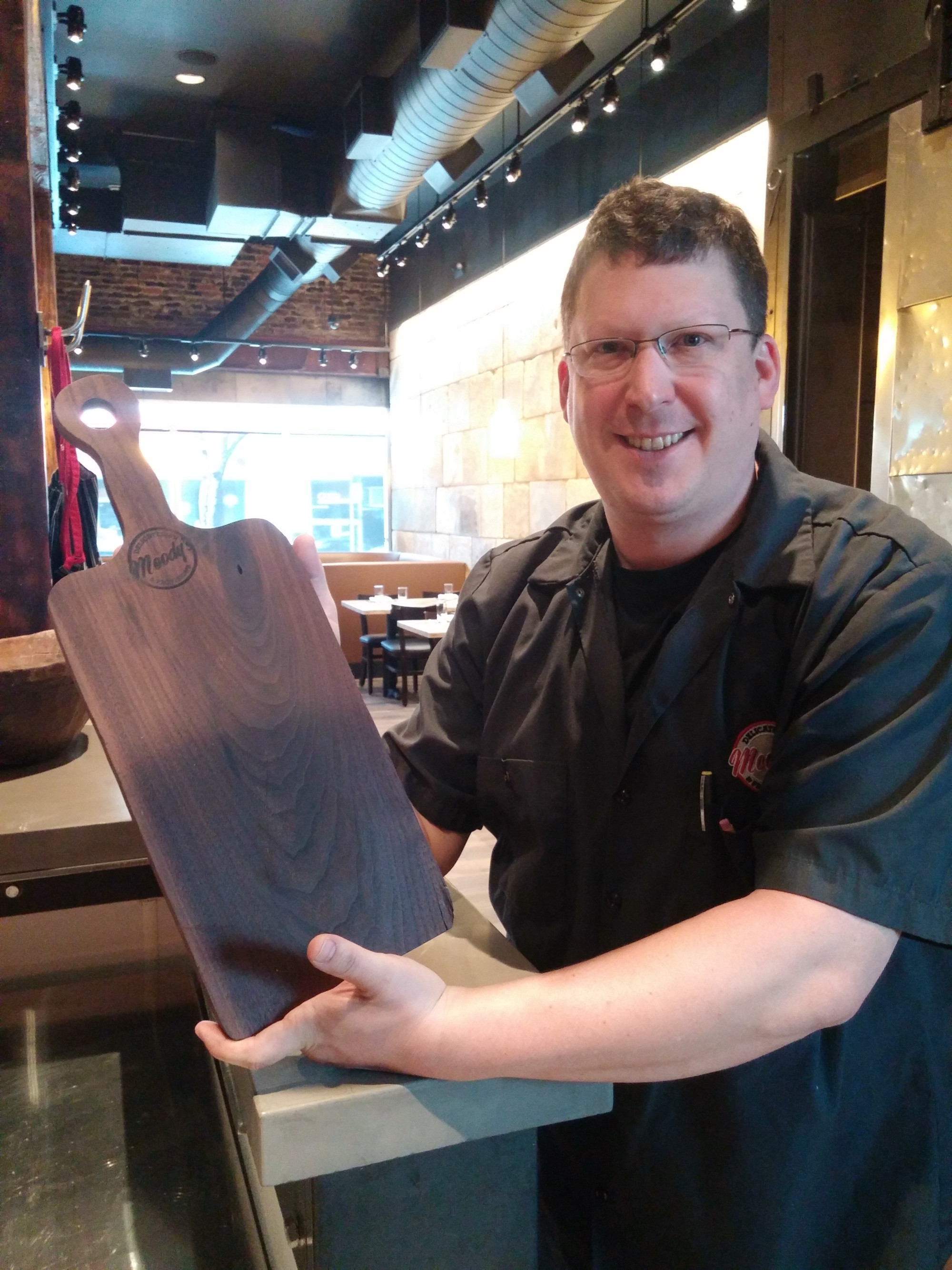 Goldberg was originally introduced to HandyWorks’ products by another local chef, who’s known for his award-winning charcuterie, which (some would say, naturally) tends to be found served on some kind of wood board: Josh Smith, owner of the lauded Moody’s Delicatessen and the adjoining restaurant Moody’s Backroom, which opened in April 2015.

“We went out to talk with Josh about handling our charcuterie program for State Street, and were like, ‘where did you get those boards?’” said Goldberg.

But for Smith, the partnership was born out of a preexisting partnership with the Pine Street Inn, where he had been donating a product called “snacksticks” (a non-perishable shell source of protein for homeless individuals, which he created) for a few years. He said that half of his production was being given to the Pine Street Inn as an outreach program, and soon after, he began teaching some classes there. He became hip to HandyWorks, and a partnership was born.

“We designed a line of charcuterie, pizza paddles, and butcher blocks for deli and backroom, and have been promoting their products since,” said Smith. “Everything we have is proprietary to us.”

When asked what the main reason would be for recommending this program to both local merchants and those looking to join the program, Smith highlighted the customizable craftsmanship and the fact that the program gives directly back to the community and the people, which differs from a large, overseas manufacturing corporation.

Ultimately, however, for Smith—and for pretty much anyone involved with Boston HandyWorks—it simply comes down to the value of people helping people.

“They’re amazing individuals that are doing something great for the community and providing work for individuals making their way back into society.”

Dan McCarthy is a freelance journalist based in Dorchester, Massachusetts. He is a contributor to Esquire, The Daily Beast, Fast Company and the Boston Institute for
Nonprofit Journalism. He was most recently the editor-in-chief for DigBoston, the last alternative weekly newspaper in Boston.