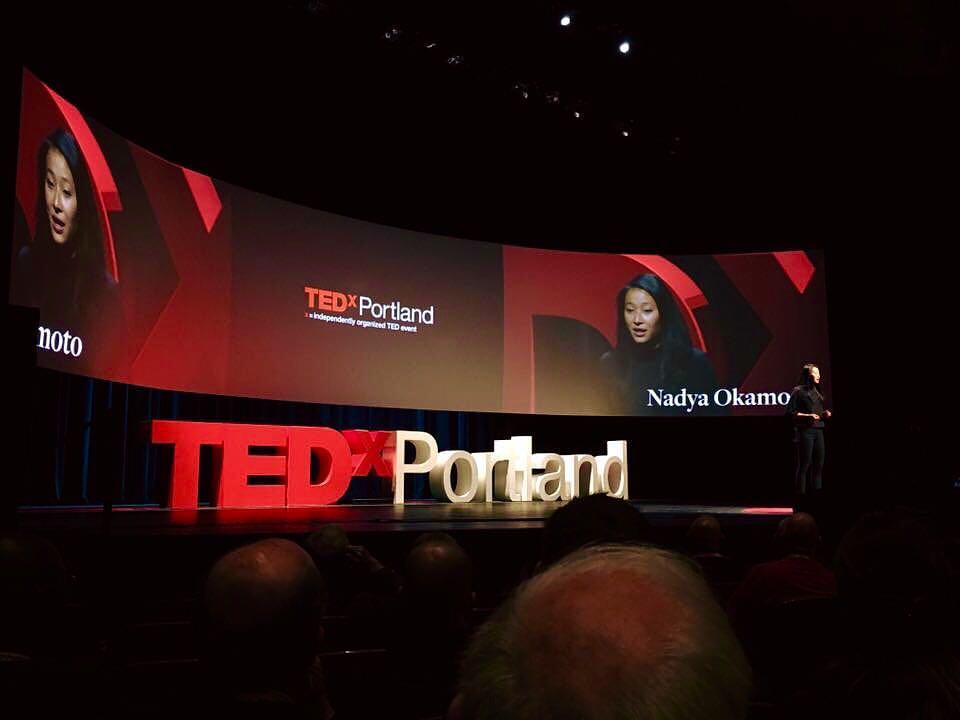 In two short years as of this December, 18-year-old Nadya Okamoto and her organization, Camions of Care, will have managed to provide feminine hygiene care for over 48,000 individual women’s menstrual cycles.

That’s a lot of periods.

As Okamoto has pointed out many times in her advocacy work, every women on the planet has their period every month for an average of forty years of their life. ough, despite the extremely natural need for women to have access to feminine hygiene, there were no organizations that exclusively supported menstrual care for homeless women.

And she new she had to do something.

Okamoto noticed this unmet need when she was 15-years-old during her family’s “transition” period, as she calls it. Her family became unable to afford their home for several months, and Okamoto was simultaneously in an abusive relationship. She checked herself into a shelter in Portland, Oregon, to hide bruises from her single-mother. Her family had just regained housing, but Okamoto decided to spend a weekend in the shelter. She recalled looking at the journal she’d kept during the difficult months her family had spent couch-hopping and staying with friends. Okamoto realized she had collected multiple stories about homeless women she had met who were forced to use alternative methods to maintain their periods, like toilet paper, stollen pillowcases and brown-paper grocery bags. A homeless woman on the street had told her that having her periods was the “most challenging part” of being homeless.

Later that year when Okamoto was 16-years-old in her sophomore year of high school in Portland, Oregon, she built Camions of Care, a youth-led global nonprofit whose mission is to support, celebrate and manage menstrual hygiene care for homeless women.

Through a nationwide network of over 50 Camions of Care campus chapters, more than 1,900 volunteers and a global distribution to nine different countries,

Okamoto began her undergraduate degree at Harvard University this fall while sitting as the executive director of her organization. She and her organization are now focusing on “systemic social and sustainable change.” They are hoping to do this through policy advocacy initiatives and will be announcing next steps in the coming months.

“How can we get youth involved in advocating for policy to make a larger impact in our community? That is what we are trying to answer. We want our impact to be long term and we are hoping to do that through policy change,” said Okamoto.

Her and her organization have been widely praised and featured internationally in recent weeks, including the Huffington Post and the New York Times. Okamoto spoke at TEDxPortland in April this year about menstrual hygiene being the “key to global development.” She was also named a Woman of Worth honoree at L’Oreal Paris’ annual award for her contributions and service. L’Oreal donated $10,000 to Camions of Care—enough to address 10,000 periods.

Yes, you did the math right. One dollar is enough to support a woman’s entire menstrual cycle.

“Start conversations. Engage others and ponder why we may be so nervous to talk about something so natural,” said Okamoto. “You can donate, invest in the menstrual movement, help us make menstrual hygiene more accessible for all. Play a part in providing another woman with everything she needs for an entire menstrual cycle. One dollar addresses one period!”

Beyond the United States, periods are a global issue, and the stigma and severity women face varies from border to border. In Kenya, girls miss an average of 4.9 days of school each month because of inadequate menstrual hygiene. In rural Uganda, girls miss up to eight days of school each term. In India, 70 percent of reproductive diseases are caused by poor menstrual hygiene.

Besides a severe lack of availability for homeless women, a single box of tampons costs an average of $6–8 in most drug stores, which could be the difference between eating dinner or going hungry for a woman on the street.

“Menstrual hygiene products are not often prioritized,” Okamoto said on NPR program “The Takeaway.” She added: “Women are more often resorting to using toilet paper and most commonly brown-paper grocery bags from what we’ve talked to them about. And using brown-paper grocery bags just has a lot of risk in terms of skin infections or general discomfort.”

Her desire for social good has driven Okamoto down other unique paths of advocacy. Last month, just hours after the United State’s presidential election results came flooding in, Okamoto opened up her Huffington Post contributor platform to anyone who wanted to share their personal or emotional reaction to the results. By the time President-Elect Donald Trump’s acceptance speech was over, she had received over 30 responses. She stayed up all night with one of her good friends from Harvard, Joshua Lee, to sort through the responses and make sure everyone who submitted a story was heard. As of this week, over 240 reactions have been published, including my own.

“It’s been a very cathartic and healing process. It’s been really wonderful for both of us,” said Okamoto over the phone after staying up all night posting stories. Between actively helping run her organization, being a student, and dancing on Harvard University’s competitive hip hop team, Okamoto seems calm and passive about pulling an all-nighters. “I can easily stay up all night for things like this. I feel much more myself when I’m advocating for a cause.”