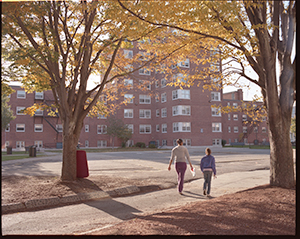 Roxbury was one of five communities this month to receive a major grant from the Department of Housing and Urban Development (HUD).

Coloretti said the grant will be used to create 500 units of affordable and mixed-income housing that will ultimately revitalize the area and help support the Whittier Street Health Clinic.

“We think this will jumpstart the local economy and make it easier for entrepreneurs to receive game-changing loans and make Ruggles Street and the surrounding area here more dynamic and a more dynamic space to attract new businesses,” Coloretti said.

The Choice Neighborhood Initiative grant is awarded to communities who present the best transformation plan to revitalize their neighborhood, as stated by HUD’s website. The Whittier Street Apartments was among 34 applicants this year. It also applied last year but was not awarded the grant then, Coloretti said.

Mayor Walsh took the mic to thank the Whittier Street community for the work it did during the application process this time around.

Walsh went on to say that the grant will have a huge impact on the community and Boston, as it did in 2011 for Dorchester’s Quincy Street Corridor and the Woodledge/Morrant Bay Apartments, an area Walsh said has experienced a growth in business and innovation as a result.

“The same thing is going to happen here. We know what the potential is,” Walsh told the audience. “We’re here to lift low-income families up, not push them out. That’s what we’re going to be doing.”

Whittier Street Apartments residents also took the time to thank HUD and elected officials for supporting them as they sought these federal funds.

Dolly Bable said she spent decades trying to apply for funding on behalf of the Whittier Street Apartments despite many skeptics.

“I remember people used to tell me that, ‘You’re wasting your time.’ For 40 years I continued because I believed that I could get something done and make a difference,” Bable said.