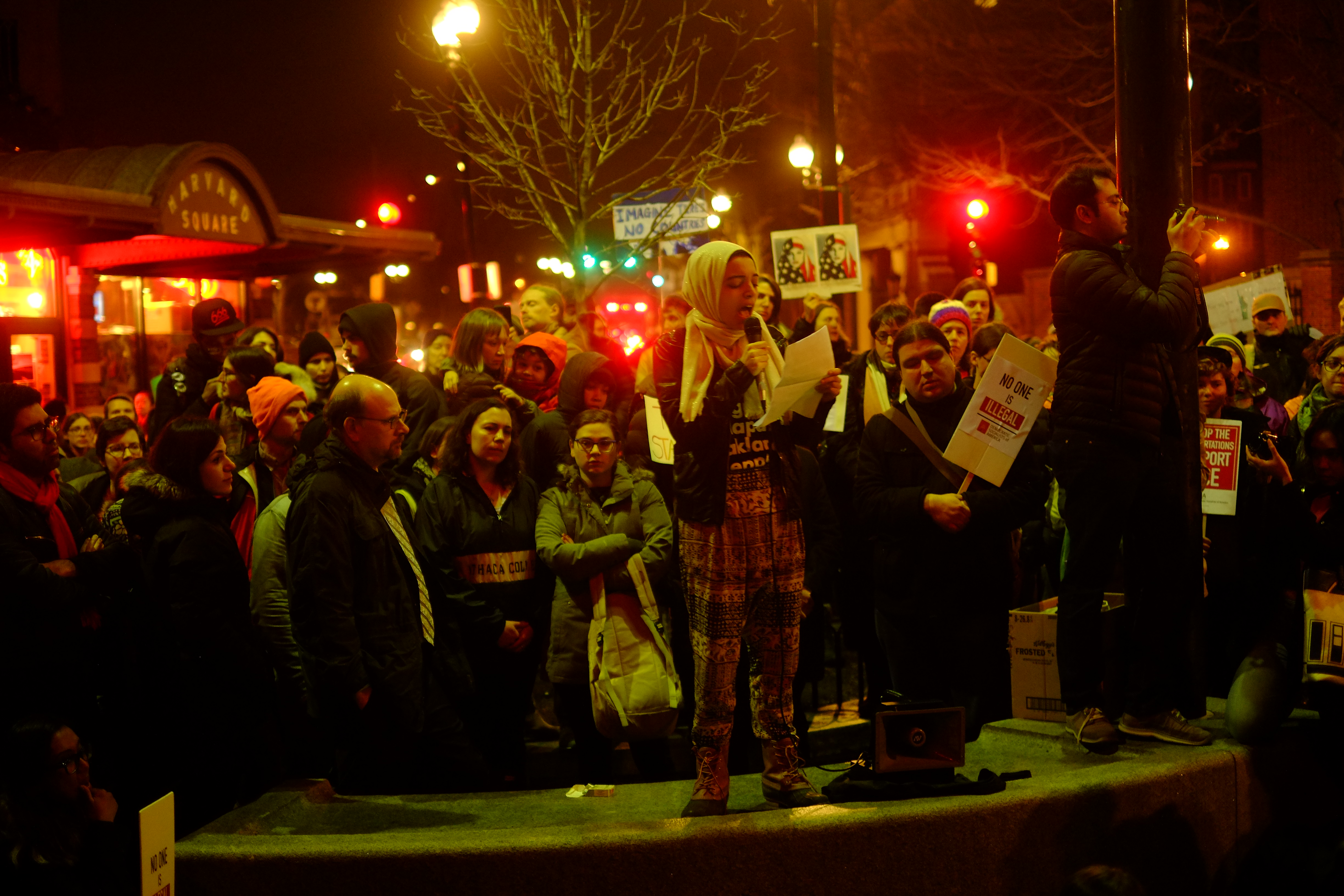 Shortly after the newest incarnation of the Trump administration’s Muslim ban was announced, the Harvard International Students Working Group rallied for institutional support from the university and to show solidarity with undocumented workers in Harvard Square on Tuesday, March 7.

Gathered around the T station, the Harvard students held signs and cheered each other’s impassioned speeches, including the words of an undocumented student who decided not to speak openly due to his fear of being deported.

The new version of the Muslim ban was signed on Monday, March 6, and while small changes have been made, the xenophobic and Islamophobic mission remains intact. People from Iran, Syria, Somalia, Libya, Sudan and Yemen are still banned, but Iraq has been removed from the list.

Students from the International Scholars’ Working Group have begun gathering signatures—750 so far—asking that the administration at Harvard provide undocumented students with financial help, mental health assistance and legal counsel.

“Six months ago, I saw my undocumented mother and and father self deport themselves from this country. My parents were in the United States for 13 years working everyday for $5 an hour. Eventually their boss wanted to reduce their salary to $4 an hour. As Trump kept blaming immigrants for the economic downturn of the United States, it was both his internal and external push that made my parents leave this country they call home. But they were the lucky ones. As we speak, Donald Trump is detaining and deporting thousands of people across this nation. Hardworking immigrants who have lived here, worked here and above all, built the country as we know it today.”

Daishi challenged the oft-repeated justification for the ban that it is targeting people who have committed some kind of crime that makes them worthy of deportation.

Abdi Samad, a Harvard sophomore from Somaliland, a self-governing region within Somalia, recalled the story of a girl named Sofia who grew up in Yemen, attended a school funded by Americans and came to the United States for her senior year of high school where she took a class in American history.

“Of course, there are dark moments in American history, but the history of this country has always been an uphill battle,” Samad said. “The country that was built with slavery was now being ruled by a black president. The country that once disenfranchised women … now had a [female] presidential contender. The America whose history Sofia learned in school has inspired her. It not only inspired her—it helped her pursue her dream. For Sofia, what’s at stake is not her feelings. What’s at stake is: do you actually want to put forward an American image that inspires millions around the world to do better for themselves or do you want to be an America based on fear in the likelihood of eliminating a threat that is statistically insignificant?”

Under the new version of the ban, refugees will be barred from entering the United States for 120 days, but a provision favoring minority religions has been dropped, and permanent residents and visa holders will not be targeted.

There are 65 million people living as refugees worldwide as of 2015, according to the United Nations High Commission for Refugees (UNHCR), and the revised ban lowers the cap on how many refugees are allowed to enter the United States each year from an already low 110,000 to just 50,000.

For comparison, Germany, a country roughly the size of New Mexico, took in about one million refugees in 2015.

In an interview following the rally and the announcement of the petition, Niharika Singh, a member of the International Scholars’ Working Group, said that while Harvard has pledged to offer its international students assistance, she doesn’t think they’ve gone far enough. “Both Harvard and MIT found out like the rest of us. … MIT went ahead and informed their community this was happening; meanwhile, there was virtually no response from Harvard until much later.”

“MIT directs students to the school’s police department, which has the number for a dean on call,” said Singh. “It’s not that ‘oh shit you happened to call at 4:30 p.m. on a Friday? Nobody in the international office can be reached until Monday morning.’”

Harvard President Drew Faust addressed the travel ban in a statement on Jan. 29, but Singh says that it took too long for the administration to respond. The International Students Working Group didn’t receive a direct response to its petition until March 15, when Paul Curran, Harvard’s director of labor and employee relations replied via a statement, directing students to Faust’s statement and a recent Harvard Gazette article outlining the university’s steps to support its international students. He also promised that: “The university will continue to monitor developments in this space and will adapt as circumstances may evolve.”

Despite the assurances, Singh says that the issue requires a more proactive and transparent approach from the university. “People who are affected by this are already panicking. … What the lack of transparency and immediacy did was further cause anxiety,” she said. “It just causes anxiety in the sense that we don’t know how much institutional support we have.”

There are roughly 10,000 international students at Harvard, and Singh says that while there are existing services in place to assist them, they’re likely to be overwhelmed by the current situation.

“In the first week, there were some post-doc [students] who were directed to go to the ACLU. … Unless Harvard and [the Harvard Immigration and Refugee Clinical Program] are hiring extra lawyers to deal with the situation, they’re going to be overburdened.”

Singh was born in India and grew up in Canada, but she says that even though she isn’t from one of the countries listed in the travel ban, she still feels uneasy.

“It’s not good,” she said. “It’s both mental health in terms of your sense of belonging here, and also fear for people who are in less liberal places. I have friends who are in the Midwest, and I’m worried for them because the general rise in rhetoric has been alarming. … It’s not just about what [Trump’s] been saying about Muslims; it’s any black or brown bodies being read as Muslim.”

Abdullah Saleh, an international student from Bangladesh earning his master’s degree at Brandeis University, said at the rally that he’s worried about the future, that more countries could be added to the list.

“Since there are terrorist incidents happening in my country, I’m afraid my country might be put on that list as well,” Saleh said, adding that traveling abroad feels so risky that he doesn’t want to chance not being allowed to return. “I was supposed to be attending my brother’s marriage last month, but I didn’t just because I fear I might be banned from entering the United States.”

Singh reiterated that just because a person is not from one of the countries on  the travel ban list doesn’t mean they’re safe from harassment or detainment.

“It’s not just the directly affected countries that this matters for,” he said. “With profiling and arbitrary expansion within the [Customs and Border Control],” people of numerous backgrounds are at risk, he added.

Although both versions of the travel ban were blocked by federal judges, Singh pointed out that premium processing for H1B visas will be suspended for six months, and the visa process in general has become more stringent.

“It’s certainly good that the courts under pressure and organizing by community groups are recognizing the discriminatory nature of these bans,” Singh said. “The administration, however, continues to appeal the court decisions and use xenophobic rhetoric, bureaucratic changes … as well as specific policies … to make lives more difficult for immigrants and people of color more generally. So while these court decisions are obviously welcome, continuing to organize to protect our rights and our communities remains critical.”