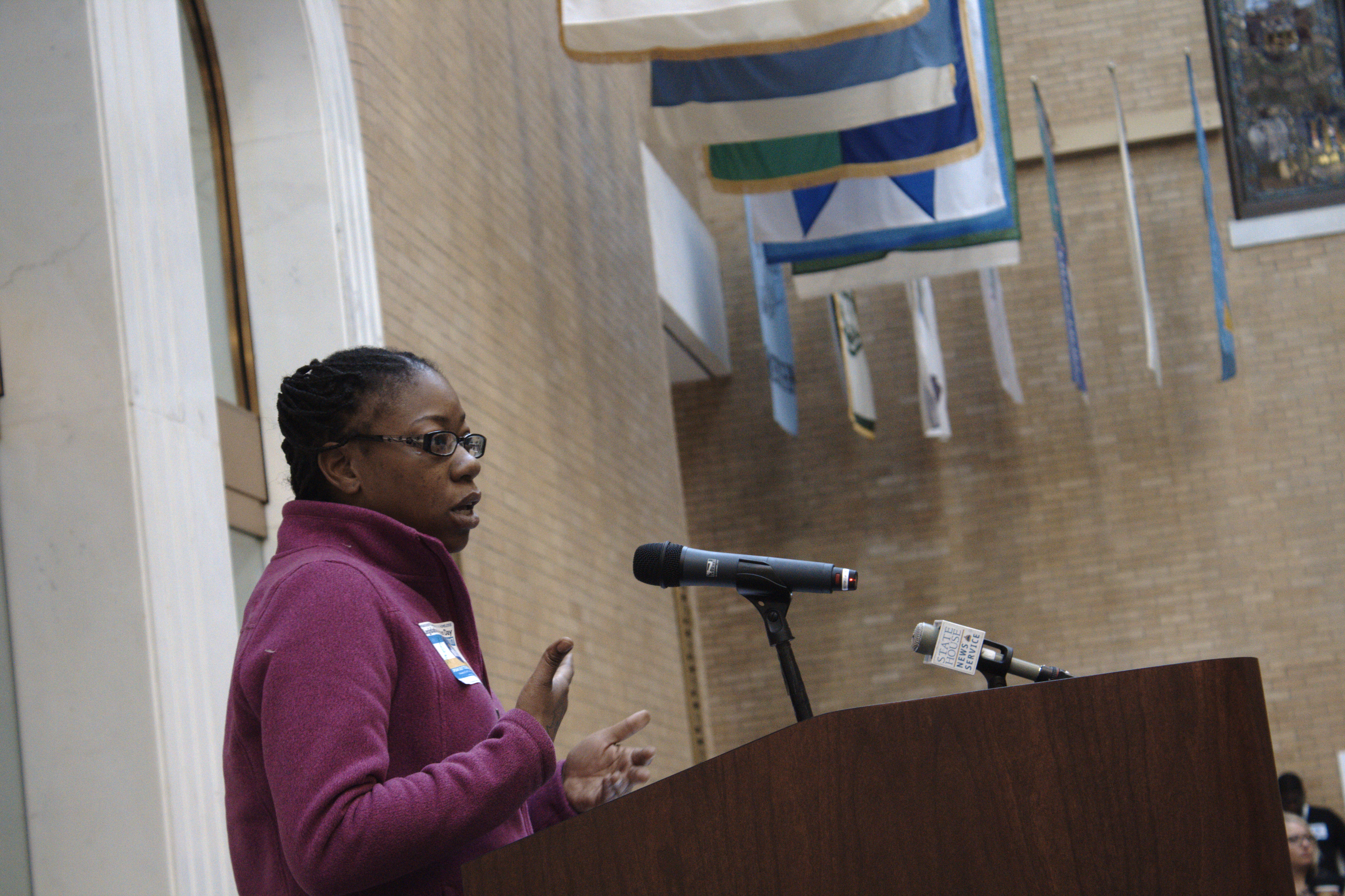 A woman identified only as Lynetta tells the assembled advocates and service providers about her experience with homelessness, after being evicted by an unscrupulous landlord. Photo by Alejandro Ramirez

One day, Lynetta and her family were evicted from their home. She says her landlord retroactively increased her rent, which is illegal, and painted her as someone who didn’t pay rent. The court date was sent to the wrong address, and she never got the chance to defend herself from the claims. After spending a few nights with friends and family, Lynetta and her husband were forced to live in their truck with the family pets, while their two daughters and nephew stayed with people they knew. They were homeless from October to January.

“We had to think of other options to build our family back up,” Lynetta said.

Spare Change News is withholding Lynetta’s last name out of respect for her and her family’s privacy.

Lynetta said that she and her husband went to the Department of Housing and Community Development every day to ask for emergency assistance shelter, and every day they were denied. Lynetta said she was told she wouldn’t qualify for three years. Finally, lawyers from Greater Boston Legal Services took their case.

Lynetta and her family are now together in a shelter.

“The whole experience was a nightmare. Our children were traumatized… and I was ashamed to tell anybody,” she said. “I am very grateful there is at least an EA shelter in place… but I want the legislature to change the rules so no family has to go through what we went through.”

Lynetta shared her story in front of two hundred advocates at the Great Hall of Flags at the state house on Feb. 27. The advocates were there as part of the Legislative Action Day, an annual event where service providers and their clients lobby lawmakers for increased funding to programs that help the homeless and help families avoid or transition out of homelessness.

“Today we’re going to focus on both the budget and bill priorities for the year ahead,” said Kelly Turley, associate director of the Massachusetts Coalition for the Homeless, which organized the event. Turley noted that service providers have had success recently in expanding and funding some key programs, and this year they plan to build on past accomplishments.

One of the building blocks of that effort is increasing funding for the Residential Assistance for Families in Transition (RAFT) Program from $13 million to $18.5 million. In addition, families without children will now be eligible for RAFT benefits. Previously, only families with children under 21 qualified for the program. Last year, the state set aside $500,000 for child-free families, and that money was spent in two months, according to Turley.

Additionally, the Coalition is pushing to remove the penalty incurred to those experiencing homelessness in the Emergency Aid to Elderly, Disabled and Children program. The EAEDC usually offers $303.70 per month to those who qualify, but people staying in shelters only receive $92.80. They also call for more funding for the program, and to increase the allowable personal asset limit from $250 to $2,500, which advocates say will let them save up money for housing costs.

The Coalition also hopes to double the state’s investment in services that help unaccompanied homeless youth from $2 million to $4 million. They also want changes made to the language in the current DHCD policies that require families to prove they spent a night in a place not fit for human habitation before qualifying for aid. There is also vocal support for a homeless Bill of Rights to combat discrimination for those experiencing homelessness.

The three-hour event was hosted by Rep. James O’Day (D-West Boylston) and included Sen. Jamie Eldridge (D-Acton) and Sen. Patricia Jehlen and was followed by a meet and greet with legislators and constituents.