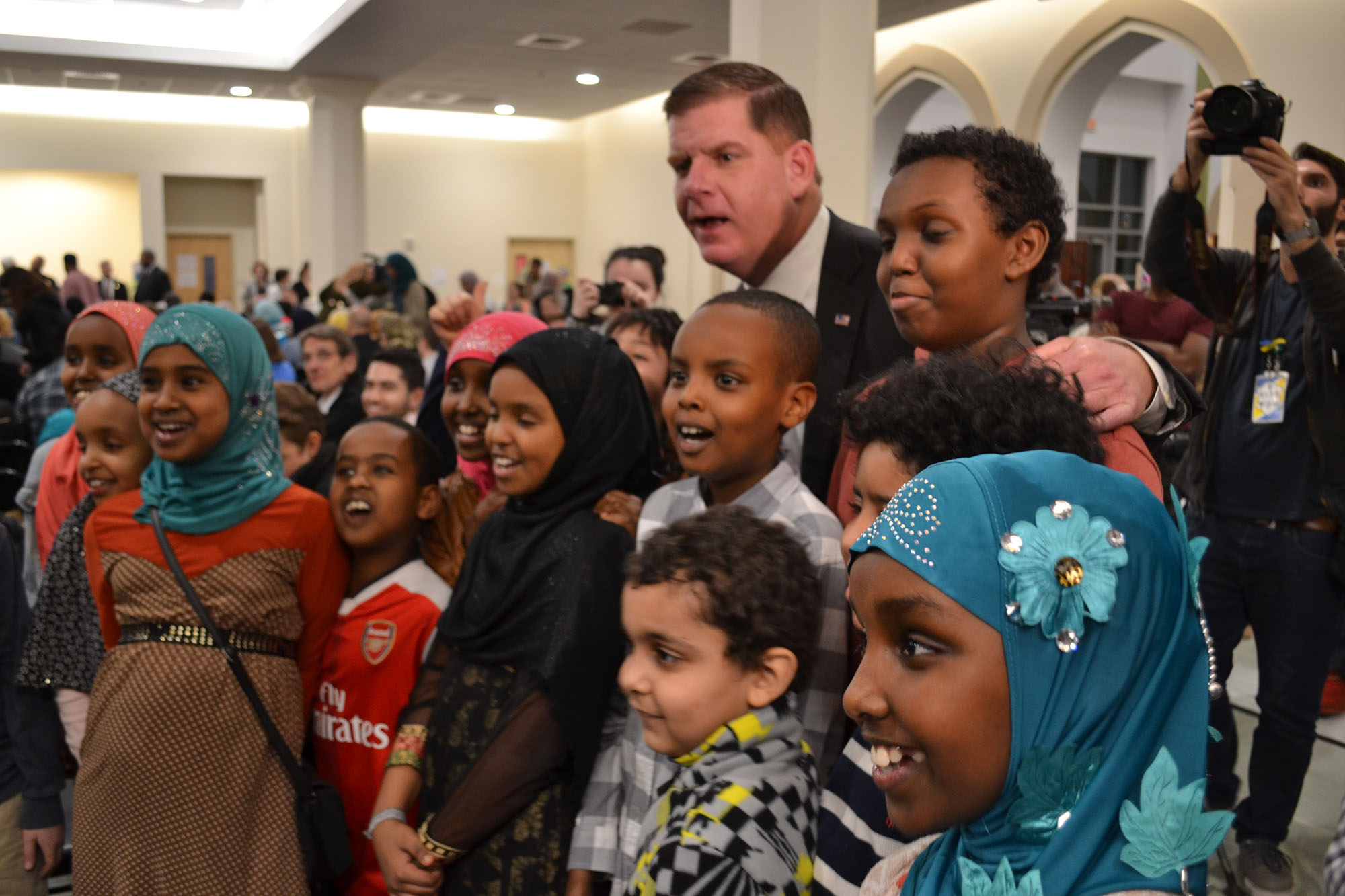 Mayor Marty Walsh poses with children before the forum. All photos: Jessica Colarossi.

On Friday, Feb. 24, Mayor Martin J. Walsh and the Islamic Society of Boston Cultural Center  hosted an Immigrant and Refugee Community Forum designed to bring resources from the City of Boston to communities impacted by recent federal executive orders and to answer questions from the community.

“I’m looking more to try to bring some peace and some comfort to some people, I think that’s important,” said Walsh before the forum began. “We have to listen to the people in the community and see what people are saying. I think there is fear and we’re going to see what else is out there.”

The night began with prayer and a brief service, and the crowd heard from Shaykh Yasir Fahmy, who commended the city’s efforts to address the fears of people in the community and called for peace and unity around the world. Almost every seat in the Cultural Center—which serves over 1,500 congregants each week, making it one of New England’s largest, most diverse Islamic community centers—was filled, and children ran along the side aisles.

One young woman, Nour Tabidi, an American-born daughter of Sudanese refugees, shared her story of temporarily being barred from reentering the United States as a result of President Trump’s executive order signed in late January. Rahmatullah Aka, an Afghan man who helps resettle refugees, spoke about anxieties and hardships often felt within families who remain separated from their relatives. Attendees had the chance to ask questions, such as how to safely seek legal support and where to find resources about visas and immigration documents.

“This is the first of a number of forums we are going to do across different communities. We hope that they feel more secure and that their city executives, their officials and their police department are there for them and that this is their city and that they feel welcome here,” said Alejandra St. Guillen, who was appointed by Mayor Walsh as director of the Office for Immigrant Advancement in 2014. She, along with many other city officials, was present during the forum.

“There is a lot of fear of the unknown,” said Guillen. “There is a certain lack of clarity even among the same members of the same administration.”

A couple of days before the forum, the Department of Homeland Security released two memos signaling some of the biggest shifts in immigration enforcement the United States has seen in a generation. They include changes such as calling for 10,000 more officers and agents at Immigration and Customs Enforcement and 5,000 more at U.S. Customs and Border Protection; planning construction and maintenance of a wall along the border of Mexico; expanding what’s known as “expedited removal”; and many more alterations that shocked the nation’s immigrant communities. As of now, Deferred Action for Childhood Arrivals, an executive order passed under the Obama administration allowing young people with no criminal records to study and work without risk of deportation, remains in place.

On Jan. 27, 2017, President Trump signed an executive order temporarily suspending entry to the United States for non-U.S. citizens traveling on passports from Iraq, Syria, Sudan, Iran, Somalia, Libya and Yemen. The order, referred to as a travel ban, also suspended the U.S. Refugee Admissions Program for the next 120 days, blocking Syrian refugees indefinitely. A federal appeals court earlier this month unanimously rejected the president’s order after a number of chaotic nights in U.S. airports with protesters and volunteer lawyers assisting travelers facing problems entering the country.

Tahirah Dean, a new immigration attorney in Boston, has been volunteering at Boston’s City Hall to give people and families legal guidance during these unsettling times.

“People want to know, is ICE coming after them, are they going to be detained—all of those questions are really relevant, and I think [tonight] did a good job answering the majority of those questions,” said Dean. “People need to know what the executive orders are saying in layman’s terms, and I think it needs to be broken down piece by piece.”

She will be at Northeastern Law with a panel of attorneys on Wednesday, March 1, from 7–9 p.m. to explain what the executive orders mean and to check in on the health of Boston’s immigrant community.

“I wasn’t sworn in as mayor to represent the democrats in the city of Boston. I was sworn in to represent all of the people of Boston,” said Mayor Walsh in his speech during the forum, which has become a common refrain.

Walsh has addressed the community several times to denounce Trump’s sweeping orders and controversial, islamophobic rhetoric. He attended the large rally in Copley Square after the president’s travel ban was issued, and he also joined protesters at Logan Airport alongside Sen. Elizabeth Warren. He has also been vocal about protecting Boston’s status of being a so-called “sanctuary city,” which essentially obstructs Boston police from unnecessarily detaining undocumented immigrants.