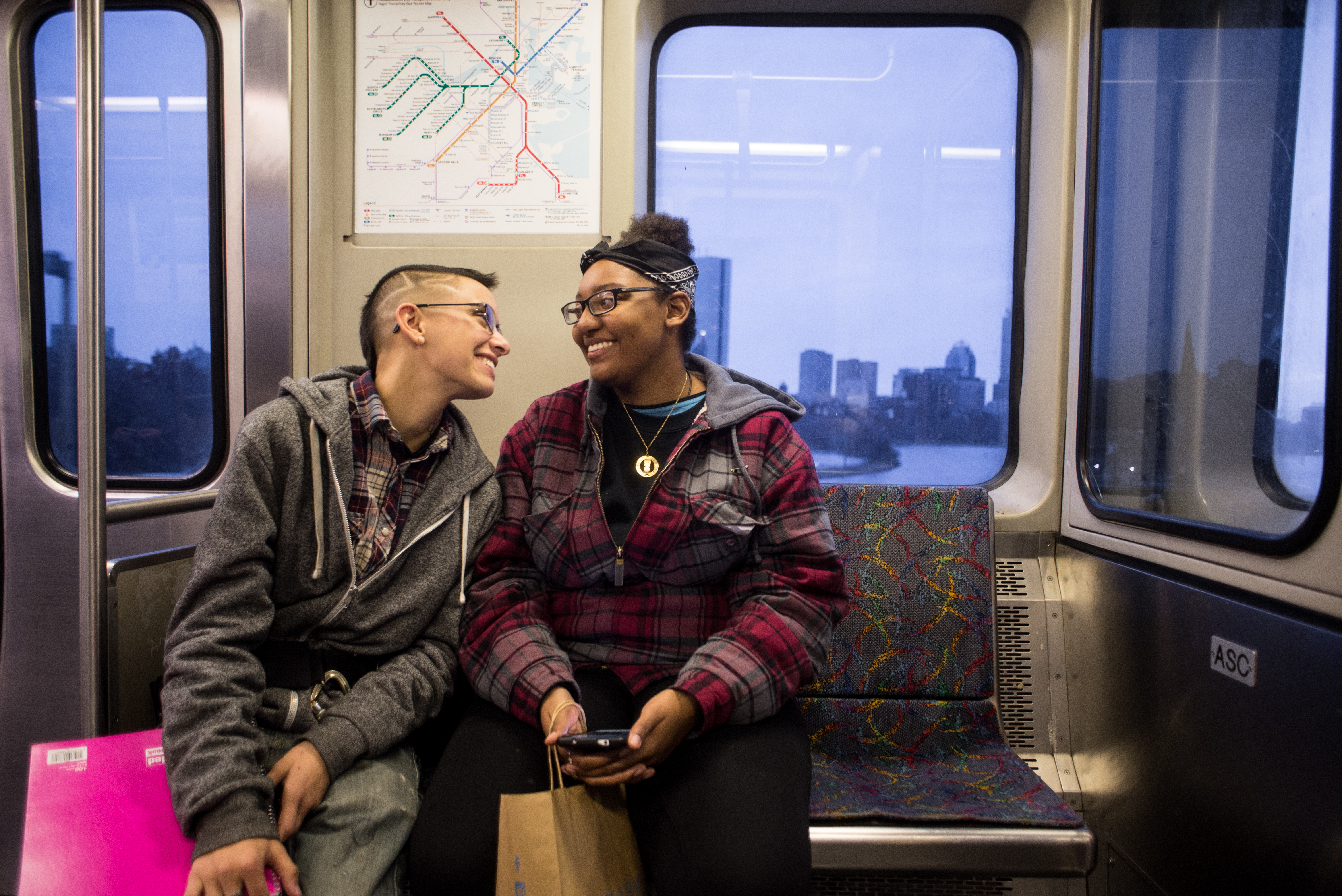 Author’s Note: The central character in this story, Liniște, asked that she be referred to by a pseudonym for safety reasons. I met Liniște in September and spent five months following her throughout various parts of her life, closely observing her experiences with homelessness and sexuality. This approach seemed most appropriate for documenting the unique struggles of LGBTQ youth homelessness beyond the statistics and stereotypes.—M.D.

At 22, Liniște struggles daily with depression, anxiety, her HIV-positive status and other health issues. On top of all these trials, she’s experiencing homelessness.

LGBTQ teens and young adults experiencing homelessness say prejudice excludes them from many services, while the dangers of being “out” keep others from even trying to access them in the first place. Beyond the difficulties they face due to their sexual or gender identity, Liniște and her peers—who each have greatly varying experiences—exist in the gap between youth and adult services. As a result, many resort to dangerous activities—including sex work, petty theft and other criminal behavior—just to get money, food or a place to sleep.

This article was produced in collaboration with the Boston Institute for Nonprofit Journalism.

Being homeless, Liniște is nearly always in public, which means it’s hard to escape stares, sarcasm and even downright aggression. The fear of sexual or physical assault is not so much rooted in “if” but rather “when,” she says. “If you don’t have some sort of secure shelter, or some place that has a lock, even if that doesn’t happen to you, you constantly live with that fear that it could.” Photo by Mike DeSocio.

Liniște tells of leaving her native Romania at a young age because her mother suspected Liniște would face discrimination due to her sexuality. After rotating through a number of group homes, foster programs, and unstable apartments in the United States and Mexico, Liniște moved more permanently to Boston three years ago. Still, she struggles to find stable housing. Photo by Mike DeSocio.

Liniște leads a session during a workshop for the NAN Project, an organization where she works that tries to prevent youth suicide. Even as she wades through the challenges of homelessness, depression, anxiety and HIV-positive status, Liniște spends much of her time working for organizations such as the NAN Project and the Sex Workers Outreach Project, which advocates for the rights and protections of sex workers. Photo by Mike DeSocio.

Liniște says the relationship with her current girlfriend, Tay, has been the single most hopeful thing steering her away from suicide. They met up one evening after trading notes on social media and then lay out on a field outside the city and talked for hours. They stayed up all night, pointed at the stars and soaked in each other’s silence. After that night, Liniște says she went a whole month—one of her longest stretches—without a single suicidal thought because Tay made her so happy. Photo by Mike DeSocio.

Liniște was excited about her new boots for this past winter, a pair of insulated Timberlands that promised to stave off another bout of frostbite. Last year, Liniște says, she suffered the pain and nerve damage of her frostbitten toes warming up on the Red Line. In hindsight, she concedes, she should have gotten off at the Charles/MGH station and checked herself into the hospital. Photo by Mike DeSocio.

For a two-week stretch last October, Liniște stayed at a friend’s apartment in Roxbury. Although her stay was only a brief sanctuary from the streets, Liniște says she rarely spends so much time inside and isn’t always comfortable despite the relative warmth. “It’s so weird to be inside,” she says. “Isn’t it like semi-suffocating?” Photo by Mike DeSocio.

Liniște dances with her girlfriend Tay during a violin performance in the Boston Common. Liniște and Tay say they have seen this performer, known as ViolinViiv on social media, in the past and have enjoyed dancing to her performances. “When things get too much, I dance,” Liniște says. Photo by Mike DeSocio.

Liniște spends some time at Youth on Fire, Boston GLASS and similar drop-in centers, but even so she finds these spaces increasingly difficult to be in. Among other problems, Liniște says she often feels obligated to share her personal history with others in these programs for the sake of putting them at ease with an unfamiliar face. These compounding factors—obligatory openness and fear of others—make it hard for Liniște to be in spaces like that, even when they cater to LGBTQ youth. Being on the sidewalk is easier—you can choose who to be around and don’t owe your comfort to anyone else. Photo by Mike DeSocio.

Flashbacks and resulting suicidal thoughts are common for Liniște. On one occasion, she says Tay saved her life by telling her, “I don’t want you to go, just like period.” “That’s exactly what I needed to hear and that saved me,” Liniște says. “I’ve been the only one telling myself that.” Photo by Mike DeSocio.

When things get to be too much, Liniște thinks back to a moment from her middle-school days. She was preparing for a presentation in front of her class and went to her teacher to express how nervous she was. Liniște remembers her teacher looking at her with soft yet firm eyes and giving her a simple piece of advice: Go up there, take a few deep breaths and start your presentation. That advice today is the last line of the suicide prevention comeback story Liniște shares at high schools with the NAN Project. “I take deep breaths often, and above all, I just be.” Photo by Mike DeSocio.