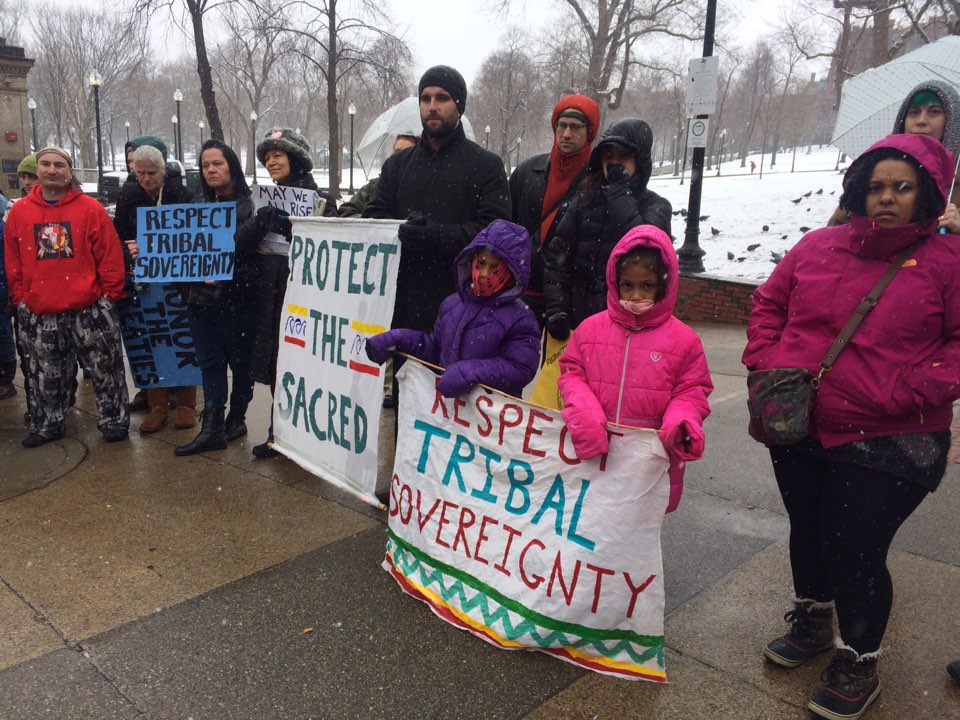 Standing Rock protesters marched through the streets of Boston against the construction of the Dakota Access Pipeline last Friday afternoon. The rally was organized by Medicine Wheel Solidarity Network, a coalition of groups supporting the NODAPL movement, in order to support the All Nations March at Washington D.C. Several Native American speakers were invited to lead the event with prayers and testimonies.

According to speaker Karan Karanfilian Doczi, Medicine Wheel Solidarity Network founder and facilitator, the fight against the Dakota pipeline had been going on unnoticed for many years. As a Dikranagerdtzi Armenian who had been raised in a Lakota family, Doczi said her people were almost all gone from the planet.

“I am the grandchild of genocide survivors,” she said. “I stand here honoring my people. I stand here as someone who will not see the end of the genocide that has been in motion for over 500 years.”

Doczi said it was important for the Boston community to protect the voiceless and defend what is sacred. She recognized the community members who had fought for the issue and stood with the indigenous people long before it became more well-known.

After Doczi’s brief introduction, the rally began with a traditional prayer. Doczi said it was impermissible to film or video the prayer because it was extremely sacred to her people. Timothy Swallow, appointed spokesperson for the Oceti Sakowin, led the prayer by beating the drums and singing a Native American song.

Bree Herne, Mohawk of the Iroquois Confederacy, stepped up to deliver her first words in honor of her people. She spoke about the history of legal struggles for the rights of the Native Americans, leading up to the United Nations Declaration of Rights on Indigenous Peoples.

“I personally want to remind us that all Native nations are sovereign,” she said. “They were sovereign before anyone else got here. They have been recognized by the U.S. government as sovereign ever since the Constitution was signed.”

Herne described the three times the UN had recognized the tribal rights of her people in the declaration. She said that the federal government had a duty to respect the Native Americans when dealing with their land.

“I would like to remind our water protectors that every fight, whether it’s drilling, mining, water pollution or anything else, the real fight is for tribal sovereignty and its recognition,” she said.

According to Doczi, Donald Trump had stated that the U.S. government had all intentions of subjugating the Native Americans to the federal entity. She said that his authorization for the Army Corps of Engineers to proceed with their pipeline construction was unacceptable for her people.

Another speaker, Mi’kmaq and Passamaquoddy Kerry Labrador, emphasized the unification process that was crucial to their ongoing fight against the Dakota Access Pipelines.

“Everyone standing here right now is standing as one, trying to save our grandmother Earth,” she said. “We are seeing our own planet being taken apart for greed, for money. I didn’t bring my children into the Earth so they could not have a future—I brought them here so they could have a decent future.”

After the speakers were finished, the protesters marched down Winthrop Street together, holding up signs and posters. After walking down the street, they ended the rally with a round dance and a prayer.

Activist Virginia Genes said that she was sincerely grateful to have attended the event. “The environmental and Native American causes were both close to my heart,” she said. “The issue is such a big one, really. What the people at Standing Rock are going through right now is unimaginable. It’s wonderful to be able to know that you’re making at least a small difference.”