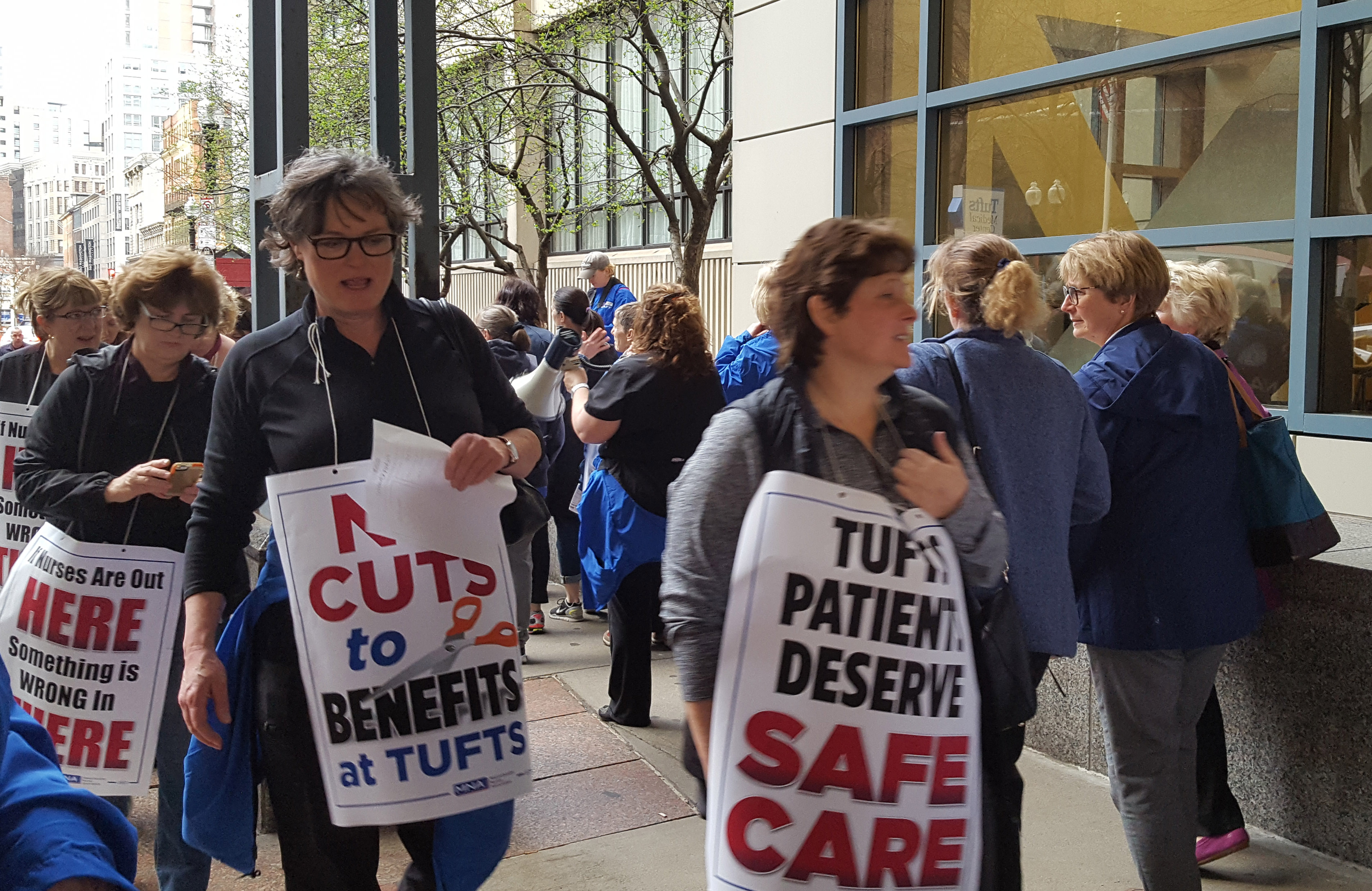 The sound of chants such as “We care, we heal, we want a better deal!” and “What do we want? Safe staffing!” rang out from under the concrete awning of the Floating Hospital and boomed down Washington Street. The roar of the picket line could even be heard in the Tufts T station, competing with the clanging and chiming of train cars.

The 1,200 registered nurses (RNs) represented by the Massachusetts Nurses Association (MNA) have worked on an expired contract since July 30, 2016. After two dozen bargaining sessions involving management-demanded cuts and no compromise, amid ongoing staffing problems and low pay, the nurses say they’ve had it.

An escalating, months-long campaign by Tufts nurses and their union reached a fever pitch on March 30 when the nurses voted by 95 percent to authorize a one-day strike. They set up the picket line on Wednesday to educate the public and to flex their collective muscle in front of Tufts management.

Workers and officers from unions such as the Service Employees’ International Union (SEIU), Verizon strikers’ IBEW 2222 and the hotel and foodservice union UNITE HERE joined the protest. Cheers rang out every time a fire truck screamed its siren or an MBTA bus honked its horn in support of the nurses.

Solidarity and resolve were palpable on the line.

Eileen, a case manager, leaned on a crutch as she limped along the snaking procession. She’d had knee surgery on both knees less than six months ago. The picket strained her; it was the most amount of walking she had done since the operation. But there was no way she was going to miss it.

She works on a complex case floor and handles many of the growing number of heroin abuse cases brought to Tufts. She cares for every patient to the best of her ability, but there’s always pressure from management on the nurses.

This management pressure is symptomatic of staffing levels that nurses say are driving many to action.

“This hospital is so understaffed. That’s the real issue here,” said Deb Sullivan, the MNA’s lead negotiator and staff organizer for Tufts RNs. “These nurses work, and they don’t know when they can go home.”

“They’re kept beyond their shifts. There are cases where they can’t eat, they can’t drink, they can’t go to the bathroom for up to ten hours at a time,” she said. “The people we’re asking to take care of us are so … uncared for themselves. No one’s taking care of them.”

“It makes for an extremely stressful day for starters. And then not only are you stressed out, but now you’re thinking, ‘I’m letting this patient down that’s counting on me.’”

“They’re not following ICU staffing laws. I’ve seen them underrate patients’ acuity when it should be one [patient] to one [assigned nurse],” she said. As Massachusetts state law requires, an ICU must have one nurse for every two patients or one nurse for every patient if that patient’s condition, known as acuity, demands added care.

When hospital management violates safe staffing policies and laws, many nurses fill out an “Unsafe/Unsatisfactory” grievance form that the union receives. “It’s no distortion to say that there are literally hundreds of these forms” from over the past few years, Sullivan said.

Research studies have found an increased risk of patient mortality when nurses are assigned to more than four patients at once, the limit nurses are asking for in medical surgical units. At Tufts today, nurses report these units often have as many as six patients assigned to a single nurse.

“The hospital is refusing to give these nurses the tools—meaning the staff, the people—to adequately care for the patients, and they’ve been doing it for probably the last six years, easy,” Sullivan said.

Other issues at the bargaining table are further stirring nurses’ indignation and resolve.

According to the union, Tufts nurses are the lowest paid among all the city’s teaching hospitals. They say this makes the staffing issue worse, as many new nurses only stay at Tufts long enough to receive the needed skills and experience.

“I’ve been here 20 years. I’ve seen people waiting and waiting for a raise that never came,” said Narissa, an ICU float nurse. “We shouldn’t have to wait any longer. The young shouldn’t haven’t to go through the same.”

The nurses and the MNA are also fighting to protect pensions for senior nurses and end a two-tier retirement system between new and senior nurses, which was put in place in the 2005 contract.

“We’re fighting as new nurses for safe staffing and for our future. We’re fighting for our fellow nurses today. And senior nurses are fighting for us, to make sure we have a pension like they had,” said Danielle, surrounded by a cohort of fellow young nurses who’d joined Tufts right out of nursing school.

According to a statement released after the picket, Tufts management said it remains committed to coming to a negotiated solution with the nurses through “thoughtful and constructive dialogue” and to reach “consensus on contract terms that support our nurses and ensure the long-term financial viability of our Medical Center.”

Management and the union have agreed to a contract extension until May 22. Six negotiation sessions with a federal mediator remain to be completed. However, as the May 22 deadline approaches, consensus is reportedly far from being achieved. As Deb Sullivan said, a strike is regrettable but appears likely.

“Anything substantive, anything that really matters, they are not giving to us, not having in-depth discussion about, and they are seeking concessions on every front,” Sullivan said.

As the picket concluded in a rally, the voices of hundreds of Tufts nurses pulsed with a single chant. It was their message to Tufts management, their proposed cuts and their continued unsafe staffing: “Not this time. Not this time.”